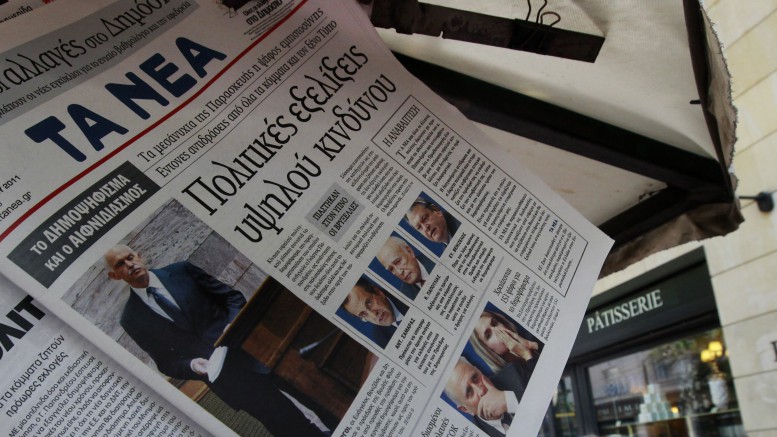 We’re going to teach the Greeks a lesson. They are really terrible. They lied to us. They suck and they were profligate and took advantage of the whole basic thing and we’re going to crush them.’ [That] was their basic attitude, all of them.”

Geithner’s reaction, to such talk, was not concern over the Greeks’ impending ‘crushing’ but that the Northern Europeans were, in the process of crushing the Greeks, about to shoot themselves in the foot. As I was writing in 2010 (in an article entitled ‘A New Versailles Haunts Europe’):…

“…turning countries like Greece into sundrenched wastelands, and forcing the rest of the Eurozone into an even faster debt-deflationary downward spiral, is a most efficient way of undermining Germany’s own economy. Assuming, for argument’s sake, that Greece is getting its just deserts, do the hard working Germans deserve a political elite that quickmarches them straight into economic catastrophe?”

Geithner was the only person in that room of morally enraged Europeans with his eye on the proverbial ball.

“But the main thing is I remember saying to these guys: You can put your foot on the neck of those guys if that’s what you want to do. But you’ve got to make sure that you send a countervailing signal of reassurance to Europe and the world that you’re going to hold the thing together and not let it go. [You’re] going to protect the rest of the place.”

The rest is, of course, history. Greece was crushed. And it was crushed not by letting it default but, instead, by imposing the largest loan in history upon its weakened shoulders on condition that it should forfeit 30% of its nominal (euro-denominated) GDP. In the process, the rest of the Periphery (where the ‘Crush Greece’ model of crisis management was exported) was fiscally waterboarded with the result that the Eurozone came to the brink and, once Mr Draghi intervened, entered a long, slow-burning debt-deflationary spiral from which only fragmentation and discord can spring.

Back in Greece, the establishment who signed Greece’s Versailles Treaty, and who remain in power (in a mutated form), are invoking the Geithner revelations to say (to people like me): “See what the mood in Europe was at the time? If we had acted tough, as you were suggesting, they would have crushed us!”

“They did crush us through the loan agreement that you signed and which you continue to pretend to honour! Exactly as Germany was crushed by the victorious allies after the Great War by being forced to sign the Versailles Treaty, so was Greece crushed by being forced to take on the toxic troika loans which bailed out, not Greece, but Northern European banks, with Bailout Mk1, and the Greek bankers (who, unlike the weaker Greeks, were never crushed), with Bailout Mk2.”

The choice Greece had in early 2010, at the time of the meetings Geithner is relating, was simple: Default within the euro or be crushed within the euro. All the threats of pushing Greece out of the euro were empty in the sense that, if they were carried out, the euro would have collapsed in short order.

Tragically, Greece’s establishment chose to allow the Northern European establishment to crush the weaker Greeks, sparing them in the process and putting Europe onto a glidepath to misanthropy, authoritarianism and fragmentation. As I was writing in that same article back in 2010, quoting Keynes’ Economic Consequences of the Peace

[1] See the transcripts of the Geithner tapes released by Peter Spiegel in his Financial Times blog.

Be the first to comment on "Crush the Greeks!"