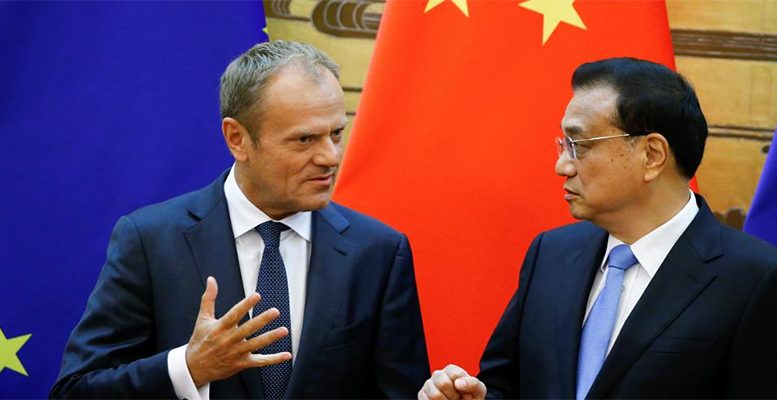 A remarkable summit between the EU and China in Beijing was marked by a turning point in Chinese views of the European Union. The summit unblocked talks about further opening of Chinese and EU market access and investment and speed up negotiations over geographical indications.
China’s prime minister LI Keqiang, talked up during the summit, moves to open China’s economy to Europe. He underlined that China will significantly raise its market access and reduce the tariffs rates for goods that are needed for Chinese companies and consumers.
But, EU leaders indicated that they want to see China’s promises translated into action as the European Union complained that the Chinese government had not delivered concrete results in terms of market access or curbing subsidies despite commitments made by Chinese President Xi Jinping.
Lately, European Union investments in China are going down as investors worry about regulatory and administrative burdens for foreign companies in China. The EU and China exchanged offers in regard to a future comprehensive investment agreement which is seen by both countries as “top priority and a key project” towards establishing and maintaining an open predictable, fair and transparent business environment for their respective investors.
The President of the European Commission Jean=Claude Juncker said that Europe wants to do more and invest more in China on the basis of a level playing field and of agreed rules. But an open investment environment works best when it is two- way.
The EU and China have a prime opportunity to work on the regulatory environment of trade and accelerate the negotiations for a bilateral investment agreement. If China and the European Union reach a deal to regulate investments, this would add a very significant pillar of stability to the global trade system. Chinese companies enjoy unencumbered access to capital provided by state owned banks and thus are able to competitively bid for the EU’s crown jewels. European Union companies lack such ability.
According to a recently published report by the European Think-tank Network on China (ETNC) Chinese investments in the European Union have grown in recent years. Foreign Direct Investment (FDI) in Europe traced back to mainand China hit a record of 65 billion euros in 2017 compared with less than two billion euros in 2010 according to data collected by Baker McKenzie.
The ETNC report dispels the emerging narrative that Europe needs China more than the other way around. European economies have a wide range of assets and features that Chinese investors seek.
Although the Chinese investments in the European Union are growing, so are the concerns of EU heads of state in EU capitals, as Chinese companies are investing and buying critical infrastructure, how to face up to security risks, loss of technological leadership and national competitiveness.
The EU Commission is not provided with the capacity to screen Chinese investors. In 2017 Germany, France and Italy tabled a proposal for an EU wide investment screening mechanism.
In a successful bilateral investment agreement these issues should be comprehensively and bindingly resolved.