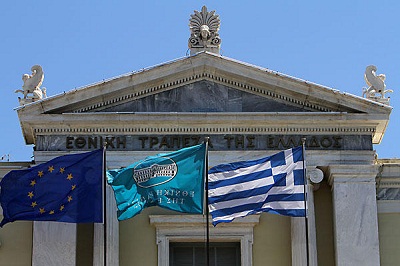 The European Commission announced Friday it had temporarily approved a bridge recapitalisation via the Hellenic Financial Stability Fund (HFSF) for Alpha Bank, EFG Eurobank, Piraeus Bank and National Bank of Greece. The injection of public capital will be provided under EU State aid rules to ensure the entities’ financial stability.

But, at the same time, the Commission said it had also opened four in-depth investigations to examine whether the measure is in line with its rules on State aid for banks during the crisis.

“The opening of an in-depth investigation is common for large amounts of state aid granted through atypical instruments. It gives interested third parties an occasion to submit comments on the measures and increases legal certainty for the beneficiaries. It does not prejudge in any way the outcome of the investigation,” the Commission remarked.

“Greek banks are currently operating under extreme conditions. Their participation in the Greek Government bond exchange and the deep recession have weakened their capital. The bridge recapitalisation by the HFSF ensures the stability of the Greek banking system.”

In April 2012, the HFSF committed to participate in the planned share capital increases of Alpha Bank, EFG Eurobank, Piraeus Bank and National Bank of Greece. On May 28, the fund granted the banks a bridge recapitalisation to cover the period until their final recapitalisation is implemented. More precisely, the HFSF deposited in the banks European Financial Stability Fund (EFSF) floating notes with maturities of six and ten years. The total amount received by the four banks is €18 billion. These deposits count as equity.

Greek banks have participated in the Greek Government bonds exchange, known as private sector involvement (PSI). The debt exchange resulted in very significant losses, depleting the capital base of the banks. The recapitalisation aims to help the banks to comply with the national regulatory capital requirements of 8%. They constitute state aid because the banks would not have been able to raise the capital on the financial markets.

The four banks in question represent around three quarters of the Greek banking sector and have an important role in financing the real economy.