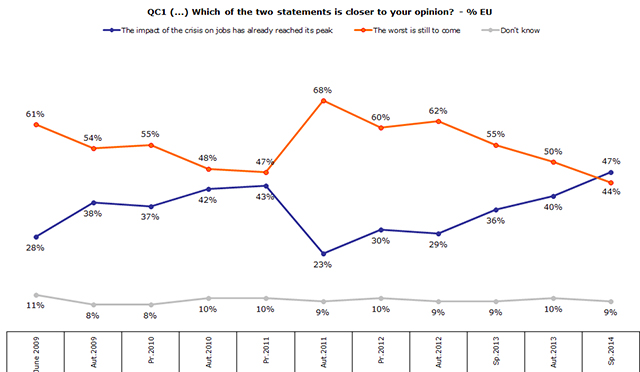 The EU’s public image started to improve in the Spring of 2013 and is gaining momentum, as former Economic Commissioner Olli Rehn could have said, since last Autumn. Nowadays, one out of three Europeans believe in the common project despite the euro sceptic earthquake of the last polls.

In 33 European countries, not only the 28 Member States, 35% of the population hold a good image of the EU, four points more than in the last survey, a similar percentage than those with a neutral perception, according to official data.

But, should this reasonable improvement get a smile out of the euro-bureaucrats? Not really: an important minority still has a negative feeling about the EU project.

While Europe is still sailing in troubled waters, results from next Eurobarometer show the Old Continent could rely on economic recovery: EU28 GDP will grow this year by a tiny 1.6%, which not enough to create fast the very much needed jobs. A 10% of the labor force cannot work, even though they were willing to.

The crisis remains the main concern for 39% of citizens despite the six-point-drop and, along with unemployment, the overall economic situation is worrying more than 70% of Europeans.

As for specific countries, the Eurobarometer shows a gloomy perspective for Spain or Greece, where youth unemployment is over 50% and the fear of a ‘lost generation’ makes daily news headlines.

Could that explain why Spaniards and Greeks don’t trust in their current economic status?

In Germany, the EU’s engine, Angela Merkel’s partners seem at ease with austerity measures. More than eight out of 10 Germans feel optimistic about their living standards. As long as Chancellor Merkel stays in power.