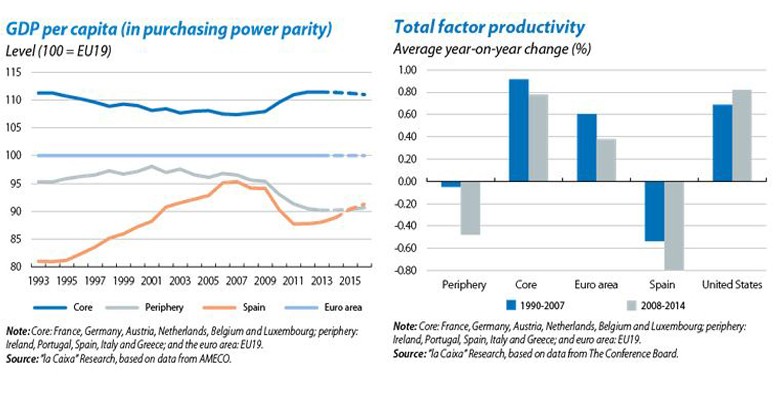 For monetary union to be sustainable, economic convergence between the member countries is fundamental. That is why it is important to analyse to what extent convergence has occurred between the euro area countries over the last few decades and how convergence could be strengthened.

However, this convergence, which never consolidated, started to reverse with the onset of the 2008 global financial crisis. The spread between the GDP per capita of the core and periphery widened from 11 pps in 2007 to 21 pps in 2013 as the economic recession was more intense and lasted longer in the periphery. Since last year, however, all evidence points to this divergence between economies starting to abate, in particular in countries such as Spain which is currently making up part of the ground lost during the crisis and whose GDP per capita might reach 91.3% of the average GDP per capita for the euro by 2016.

Between 1990 and 2007, relative convergence was achieved between the economies of the euro area thanks to the greater contribution to growth of the labour factor in peripheral countries, both in terms of the amount of employment (for instance by more women joining the labour market) and quality (such as workers’ higher qualifications).

On the other hand, the contribution of the factor of capital not related to information technologies was also greater in the periphery, also contributing to these countries’ catch-up. However, total factor productivity (TFP), which measures how efficiently an economy uses its input factors, did not help the convergence process; in fact, quite the opposite: between 1990 and 2007 the TFP worsened in the periphery but increased in the core, a divergence that was accentuated by the crisis.

Translated into concrete actions, those countries lagging behind must improve the efficiency of their economies by adopting the institutions, technologies and production methods of the advanced countries and must also make more use of the advantage of the economies of scale offered by the single market. Total factor productivity is the key element that determines long-term growth. Only by increasing this productivity in the periphery will convergence between countries be stronger and more sustainable.