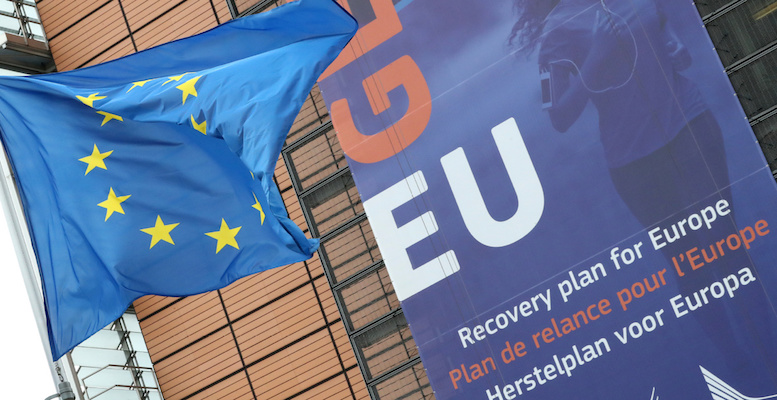 For the first time in its history, the European Union will take on debt to finance an extraordinary economic stimulus, composed of 390 billion euros in grants (compared to 500 billion initially proposed by the European Commission) and 360 billion in loans. The total amount of the fund will be 750 billion euros of which Spain will receive 140 billion (72.7 billion will be non-refundable aid and the rest in loans). As explained by Francisco Vidal, an analyst at Intermoney:

“Although these numbers may grate because the proportion of loans is higher, we must take into account that these will be subject to lax financial conditions amid a scenario of low rates in Europe.”

Specifically, the fund would be financed through the issuance of EU debt eligible for the ECB purchase programme. It would be a temporary reinforcement (2021-24) for the EC budget (to which Spain contributes 8.2% and Italy 11.7%) and is expected to be repaid through the EC budget between 2028 and 2058. We should remember that this fund is in addition to the €540 billion already approved (SURE programme, EIB and MEDE guarantees). Moreover, the deal is much broader since the financial framework for 2021-2027 has also been approved, standing at 1.074 billion euros.

The importance of the agreement is undeniable as it has finally managed to put together a European instrument for sharing debt. According to Ranko Berich, head of Monex Europe’s analysis team:

“Although the $750bn package may be relatively modest in comparison to fiscal stimulus in the US, this is beside the point. A mutualised debt instrument allows governments such as Italy and Spain to deploy recovery funds without further stressing their debt sustainability. “

However, as Banca March points out, “the price of achieving the agreement has been high.” And in fact, the rebate cheques on the contribution to the Community budget which the United Kingdom inaugurated, and the European Commission intended to extinguish after Brexit, will be maintained. In fact, the five net contributor countries – Germany, the Netherlands, Sweden, Austria and Denmark – will even extend them, with rebates amounting to 27 billion euros in 7 years. The Netherlands will sign up to half (13.5 billion) of this total. The frugal countries grab this privilege despite the fact that, according to Brussels, they are amongst the main beneficiaries of the internal market.

Less visible, but relevant, is the renouncing of strict control as far as respecting the rule of law mechanism in the management of EU funds. The initiative had been promoted months ago by Angela Merkel’s government as a reaction, amongst other reasons, to suspicions of enrichment at the expense of the EU budget, in countries like Hungary or Poland. But the monitoring mechanism has been decaffeinated in order not to provoke the rejection of these partners. Days before the summit, Germany already made it clear that the priority was to approve the recovery plans even if it meant sacrificing certain objectives, such as the rule of law mechanism.

On the other hand, other concessions more directly linked to the fund were avoided. These include the frugal nations’ demand for a right of veto to stop aid linked to the pandemic to countries that do not implement reforms. However, the agreement does allow one country (or more) to express its doubts about compliance with another country’s National Reform Plan and the Commission’s assessment, which would require political leaders to address the issue in person (at the next European Council). This is not a direct veto, but it could delay the whole process by up to three months. This would reduce the window of opportunity and complicate the recipient countries’ ability to obtain the funds.

Moreover, increased conditionality need not be a negative point. For Intermoney, “it prevents important reforms from being undone in some countries and allows macroeconomic stability to be preserved in the medium and long term.”

The funds will not be available until the beginning of 2021 at the earliest, although a tool is being considered to make part of them available before year-end. Seventy percent of Reconstruction Fund spending will be concentrated in 2021 and 2022, although payments may be extended until 2026.

There are 3 pillars supporting the destination of these funds. The first is to reinforce the digital transition, rural programmes and strengthen the economy. The second pillar will be to promote private investment. It will cover financial support for viable businesses, investment and promotion of key sectors such as technology and others like the green economy (30% of the aid must be spent on combating climate change) and health. The third pillar will focus on the health sector and on research to address future crises.

The next steps will be European parliament approval and national parliamentary ratifications across countries. Nicola Mai, sovereign credit analyst at PIMCO, comments:

“While there could be some noise along the way, I would expect these to be passed without much drama. The agreement reinforces the action taken by the ECB in supporting sovereign markets, and supports our constructive stance towards European peripherals.”

A political signal towards more European integration was needed and this is another point that the Recovery Fund provides. But it doesn’t move the needle enough for the macro given the size of the shock. As flagged by experts at Bank of America Global Research, “the Recovery Fund is a recovery tool. But they still lack a proper cyclical/stabilisation tool and national governments are left to deal with that on their own.” So they add:

“Given the above discussion, the ECB will need to continue its support (we expect PEPP to extend for all 2021). But the fiscal response for stabilization in most countries remains insufficient and we don’t think the recovery fund will significantly change this in the short run.”

The initial impact on the stock market has been very positive, although the agreement had already begun to be discounted the previous day. Going from the end of May, when the EC’s proposal was made known, the euro has appreciated from levels of 1.10 against the dollar to over 1.14 currently. (The Recovery Fund agreement represents a step forward in European unity and strengthens the continuity of the single currency.) Meanwhile, peripheral risk premiums have fallen from end-May to now by c.-32 b.p. in Italy and -21 b.p. in Spain to 79 and 152 b.p. respectively (as the outlook for increased post-Covid-19 debt has moderated). And finally, as far as equities are concerned, the reception has been very positive. It is a clear support for the cyclical recovery from H2’20 onwards, although the bulk of the effects will be felt in 2021-22. The main pending risk is the de-escalation process and risks of resurgence that could delay the economic recovery.