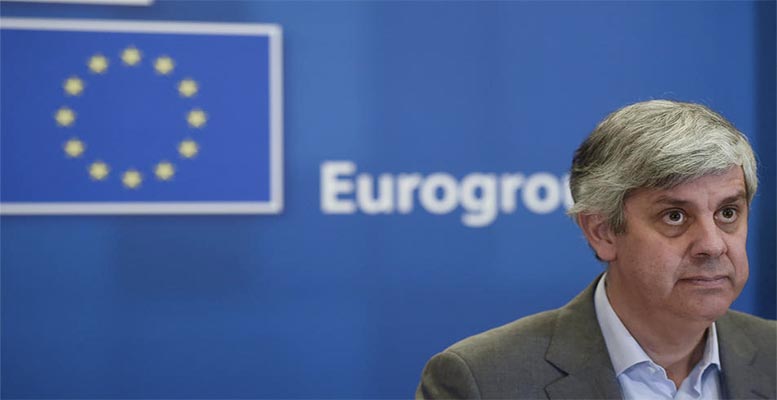 The Eurogroup's president, Mario Centeno, in a conference press

After 16 hours of telematic meetings, the Eurogroup came close to reaching an agreement, but once again, that did not happen. Once again, it is postponing the decision until tomorrow, Thursday. Once again, it has failed.

The Eurozone finance and economy ministers remain divided over the debt mechanism which will help the countries most affected by the pandemic to finance themselves. This division between North and South has a very clear figure: 500 billion euros are up in the air.

More specifically, the mechanisms under discussion are as follows. Firstly, 100 billion Euros from the SURE Plan (Support for Unemployment Risk in an Emergency). These are EU-guaranteed loans to countries to finance increased spending on job losses.

Credit lines from the European Stability Mechanism (ESM) rescue fund are also at stake. This fund has 410 billion euros of lending capacity and 200 billion euros could be mobilised in a first phase.

The ESM rescue programmes contemplate surveillance programmes (troika) that include very specific fiscal objectives from Brussels and consultations before each legislative decision. There is consensus that the conditionality of these emergency lines needs to be softer this time round than in the 2008-2009 rescue. But there is no agreement yet on where to draw the line. Italy believes they can only accept this ESM package if there is no obligation for macroeconomic adjustment. It also insists that the statement from the economy and finance ministers to their heads of government and state (who must give the final go-ahead) should clearly include references to a possible joint debt issue in the EU at some point. Either Eurobonds, or a Recovery Fund as suggested by France or the European Commission, with its own joint debt capacity.

Joint debt issuance remains one of the main points of friction between the different delegations. Spain, France and Italy are defending the incorporation of a temporary, time-limited Eurobond issue to finance economic recovery from the pandemic. However, the northern countries, led by Germany and the Netherlands, continue to reject this formula.

The messages sent by international bodies such as the OECD seem to have been of no use. Their Secretary General, Ángel Gurría, would have been “absolutely in favour” of Eurobonds when he said in an interview that “sharing financial risks is the next necessary step in European integration”. In fact, Gurría believed that the issue of joint debt would be an interesting move for sceptical countries such as Germany, given that they benefit particularly from the stability and prosperity of the euro bloc.

So the next aid package will most likely come from the ESM, with a capacity of 410 billion euros, albeit with conditionality. In this regard, even a new emergency facility is being considered, along the line of those of the IMF, which has no conditionality (beyond controlled use for the emergency). That said, we need to see the details and the amounts would be very small. In the case of Spain, the facility would not exceed 10-20 billion euros, so it would not solve the basic problem.

Another alternative source of aid is the Sure plan to protect employment, with 100 billion euros available. However, this programme has in fact been another friction point. It has not been seen as the embryo of an European unemployment insurance and its temporary nature has been insisted on.

In the opinion of Intermoney’s analysts, the orthodox countries of Europe are making the same mistake as in the previous crisis: waiting for the problems to be identified before taking action. This will cause greater economic damage and, at the same time, make the recovery more difficult and the measures to promote it more costly.

“The fact that the use of the ESM is highly conditional, denying the exceptional nature of the crisis, is not the right approach. Nor is the fact that it does not definitively pave the way to an economic reconstruction plan which will be indispensable when it is established that we have hit rock bottom.”

Furthermore, this political division may add an additional premium to certain countries’ debt, since the European project is once again being called into question when there is an even greater need for it to be reaffirmed.

“That said, we should allow room for some self-criticism here. We are not just facing a repetition of the errors made by the orthodox countries of Europe, but also the fact that they are worried by some actions taken by those countries most affected by the health crisis”.