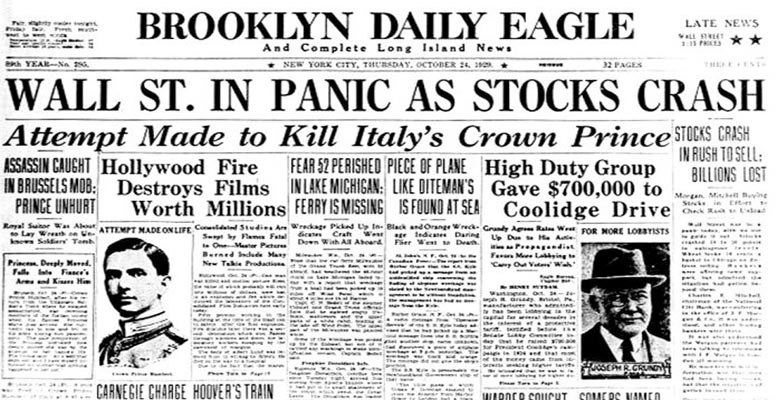 Is the current economic crisis scenario caused by COVID-19 similar or different to the Great Depression of 1929? This question is answered in this note by John Plassard, investment specialist at Mirabaud.

To compare the crisis of 1929 with today’s would be grossly unfair. There are major differences between the two situations. Not only in terms of their nature, but with regard to the measures being taken today by governments, central banks and financial markets. That said, if the pandemic were to spread over time, that perspective could change.

According to French government estimates, two months of economic standstill in France would mean a 6% drop in GDP and create a difficult situation, adding an economic crisis to a public health crisis. It is not for nothing that the Minister of Economy, Bruno Le Maire, compared the situation to the crisis of 1929.

So these figures exceed those of the 2008 financial crisis and can only be compared with those of the Great Depression.

On this basis, Plassard highlights the following similarities between the two crises.

During the Great Depression, US GDP fell by 5.1%. Since 1948, the average fall in GDP has been 2.3%, and the worst result was recorded during the recession of 2007-2009. Since the 1945 recession, after the Second World War, there has been no double-digit drop. However, Goldman Sachs is now forecasting a fall of 24% in the second quarter of 2020 and Morgan Stanley believes this could reach 30%.

As for corporate profits, analysts are forecasting a decline of 5.2% and an increase in revenues of 2%. For the second quarter, the same estimates say profits would fall by 10% and earnings by 0.4%; in the third quarter, profits would rise by 4.5% and revenues by 3.6%. And for the year as a whole, corporate profits are expected to fall by 1.2%, on earnings growth of 2%. Clearly, these forecasts do not take into account the historical lockdown in economic activity, which will have a much more violent impact than expected on corporate profits.

The week after the Wall Street crash of 1929, the Fed cut interest rates and injected exceptional levels of liquidity. But at a later stage, it raised rates to protect its gold reserves, stopped injecting liquidity and tightened its monetary policy to fight inflation. These measures led to another deep recession in 1937. On the other hand, between 1929 and 1933, the Federal Reserve did nothing to rescue the banks. In 2020, however, the central banks have not been slow to react and both the Fed and the ECB have pledged to do “whatever it takes”.

The US government has committed to investing 2 trillion dollars in helping its companies and the Eurozone has not been left behind. The German government will lend employees and companies 822 billion euros. And for the first time, Germany will borrow from the markets to finance these measures. During the Great Depression, however, both Democrats and Republicans struggled to achieve a balanced budget and cut spending. This time round, the US will invest 10% of GDP in public spending, at a time when the country has a greater social safety network to protect the most vulnerable.