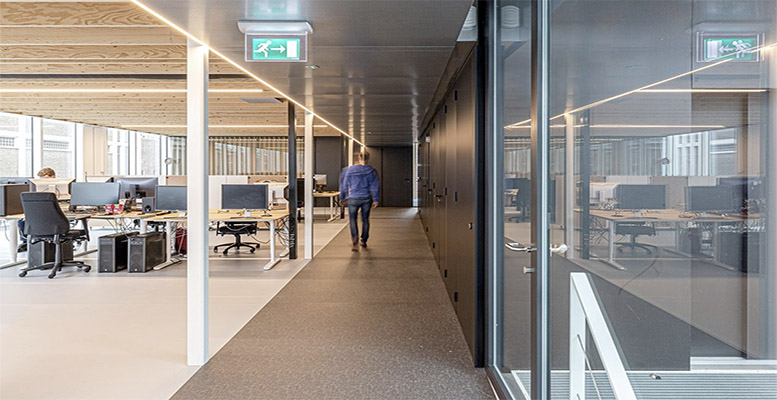 Working at the office

Rigel Patricia Scheller (Scope Ratings) | Restricting people to their homes to contain the Covid-19 pandemic has changed how they shop, socialise, study and work. Some changes may prove long term, with far-reaching repercussions for real estate. The severity of the impact on office property is less clear.

The Covid-19 impact on office space could markedly diverge across different parts of Europe. While the repercussions in some countries might be limited due to pre-pandemic remote-working trends, the impact might be stronger in countries with significant office space under construction, more pronounced vacancies and lower prevalence of home working before the pandemic started.

Remote working will also have an uneven impact across buildings types: high-quality, modern and flexible premises whose owners can more easily adapt to the new market requirements will remain in demand – for three reasons.

First, the pandemic has accelerated a pre-existing tendency rather than created a new trend toward more flexible working arrangements for white-collar staff.

Secondly, in some cities and regions such as the Nordics, working from home was relatively common pre-crisis. Therefore, any shake-up of the office property market is bound to be less pronounced there than in places where the pandemic leads to a more fundamental shift in working patterns.

Thirdly, there are potentially powerful forces which will limit, if not offset, the impact of remote working on demand for office space. Prestigious offices will remain important for corporate branding and as a place to meet clients and business partners as it was pre-Covid. Employers will also focus on improvement of the company’s working environment, possibly with a shift away from personal, cellular spaces to more collaborative space. As many employers will likely insist on regular office attendance for some and perhaps all staff, they will encourage it with more spacious working, meeting and communal areas, not least to conform with expected stricter coronavirus health and safety measures. Employers will also continue to rely on smart, modern, comfortable offices to recruit and retain skilled staff.

In addition, the European office market was characterised by greater demand than supplybefore the pandemic struck. The trend towards more working from home might simply bring demand more in line with supply in the medium term.

Working from home is not a new phenomenon in Europe but it was a slow-burning trend before the pandemic. In the EU, only around 5% of employees worked from home in 2010, a percentage that remained constant until 2019. However, the share of employees working from home at least once a week did increase from 12.5% in 2010 to above 15% in 2019, according to Eurostat data.Working from home was much more pronounced in the Nordic region. More than 30% of employees worked from home for at least part of the week in Denmark, Norway and Sweden in 2019, according to Eurostat. In contrast, rates were far lower in parts of Eastern Europe, at just 10% in Hungary and Poland, for example (Figure 2).The different industrial profiles of European countries partly explain the uneven prevalence of remote working, since not all tasks can realistically be done remotely. The size of a country’s knowledge-intensive sector tends to determine the take-up of remoteworking. In Sweden, a country with a well-developed information and communication technology (ICT) sector, more than 60% of ICT employees had the option to work from home in 2019, according to JRC calculations.Working culture also plays a role. Flexible working has been embedded in Finland’s labour market for over two decades, based on a deep-rooted culture of mutual trust, a focus on family-friendly work policies and flatter hierarchies.

The office real estate market in Europe experienced record take-up levels of more than 12 million sqm in 2018 and 2019, with office vacancies running at an all-time low of 5.8% at the end of 2019. Robust demand and limited supply exerted upward pressure on rents and pushed vacancies in some cities to unusually low levels. Vacancy rates were particularly low in Germany – Berlin 1.5%, Munich 2% – in Paris 1.6% and in Nordic capitals. In Stockholm, the vacancy rate fell to 5.5%, 1.5pp below the level of 2017. In Oslo, the vacancy rate dropped to 5% in 2019, the lowest level since 2008. In Helsinki, the vacancy rate has declined since its high of 13.5% in mid-2017 and was 11% by the end of 2019. While high compared with other capitals, the building pipeline for the next few years is thin, with only 42,000 sqm of offices under construction.

Overall, Europe’s tight office market reflected the years of sustained economic growth after the global financial crisis in 2008-09, leading to declines in unemployment across Europe and steady increases in economic activity in metropolitan areas.

The dramatic impact of the measures to contain the Covid-19 pandemic have inevitably fed through to working habits and demand for office property in Europe and the rest of the world. The first round of lockdowns resulted in about 50% of the workforce in Europe working from home2. Continuing restrictions have ensured that offices in many countries have been left empty. Rental negotiations have stopped, as occupiers have adopted a wait-and-see approachto assess their long-term requirements for office space if, and when, the pandemic is brought under control. Working from home is currently widely endorsed by governments as part of their coronavirus-containment strategy. The uncertainty regarding the future of the office market has pulled letting activity down by 31% against the five-year Q1-Q3 average – according to Savills. Northern Europe and some central and eastern European countries have still proved relatively resilient. The biggest metropoles such as Paris (the central business district rather than La Défense) and London suffered the most in terms of occupier demand (Figure 3) as the authorities imposed strict lockdowns and other measures in March and April last year. In the case of London, the office market faces not only the remote-working challenge but also the strong competition from flexible office providers and Brexit.

Pandemic-related measures increased vacant space across European markets, rising to 6.3% as of Q3 2020 (0.5pp higher than in December 2019). The most important metropoles still showed their resilience, with some core western European markets recording only modest rises in vacancy rates – Paris (+0.8%), Berlin(+0.9 %) and Amsterdam ( +0.2%) – despite the initial shock of the pandemic. This reflects hefty government support for business through furlough programmes and state-backed loans among other meaures.Other markets however have seen larger increases in the amount of vacant office space, which rose to above 11% in Warsaw (+3. 2pp), 8.1% in Budapest (+1.9pp) and to 7.8% in Stockolm (+2.3pp).

Uncertainty combined with the use of shorter standard leases in some countries partly explain the differences in take-up and vacancy rates across cities. For example, lease terms in the London office market are relatively long -10 years on average- compared to 3-5 years in most continental Europe. This might partly explain London’s drastic fall in take-up rates, as some tenants prefer not to commit for such long periods, favoring the flexible-office providers and their offer of short-term leases during such a period ofuncertainty. Another factor influencing these variations is the development pipeline, which is more dynamic in central and eastern Europe. This has resulted in newly developed buildings coming on to the market at the same time as landlords put older premises back on the market in response to the recession last year.