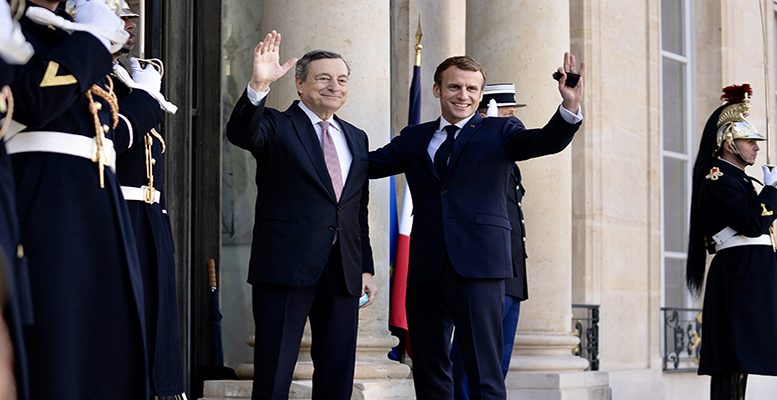 Luis Alcaide | Angela Merkel’s departure from the German chancellery raises the question of the attitude of the Symaphoric coalition (Social Democrats, Greens and Liberals) towards the European integration process. In the meantime, Italian Prime Minister Mario Draghi and French President Emmanuel Macron signed an extensive bilateral agreement in Rome (60 pages, including both foreign policy and defence policy and a series of concrete economic agreements). This strengthens the role of the two protagonists vis-à-vis a sovereign Europe as a firewall against a too strong Germany.

In 2017, Macron and the former Italian prime minister, Paolo Gentilone, had already attempted a rapprochement that was rejected by the supporters of the 5-Star Movement and Italian nationalists.
Now the new agreement aims to find ways to soften the Stability and Growth Pact with its restrictions on budget deficits, 3% of GDP, or public debt, 60% of GDP.

Which direction will the new German government take: more Europe with its expansionary monetary and fiscal policies, or more nationalism, more receptionism or higher barriers to immigration? In France, with presidential elections in sight, Macron is seeking to strengthen his candidacy with his European charter as a currency, while exclusivist nationalism seems to be gaining ground. Macron’s Republic on the march has shown its weaknesses in the last local elections.

Gaullism, in a more or less veiled or open form, is gaining ground amongst the political elites of the centre and centre-right. The former prime minister and mayor of Havre, A. Philippe, is well-liked amongst the French. However he has announced that he does not want to go up against someone who was his President.

Who could be the one to captain the Republican France: Michel Barnier, perhaps?

Barnier lacks Philippe’s popularity. His main credentials are his status as a Brexit negotiator with the British. Barnier would be presented as a super-convinced ex-European, as he writes in his book “La grande illusion”. He said: “For my part, I have always believed that France is greater when it is European and that it should keep the arrogance of wanting a French Europe to itself”.

Brexit is one thing and, as Sideon Rechman points out in the Financial Times, defending Europe or France’s presidency is another. Barnier’s doubts on immigration with a proposed 5-year moratorium and less forcefulness between French and European sovereignty.

The French, like many Italians, are not in favour of immigration or even of national sovereignty being subordinated to EU rules.

There are also doubts as to whether the new German government would align itself in one way or another with the frugal states (Denmark, Austria, Sweden or the Netherlands), coalition governments with a strong social democratic presence. Doubts also remain as to whether the recent Draghi-Macron pact would be backed by a Gaullist France and a less cosmopolitan Italy. Doubts also about whether a Spanish government formed by the PP and VOX would not look favourably on confirming a patriotic nationalism.