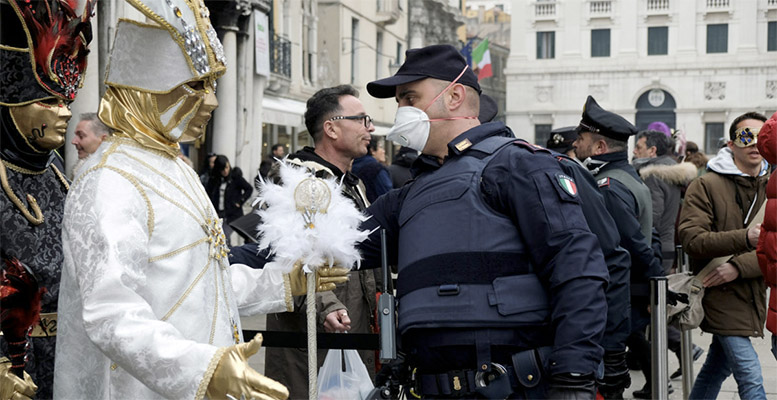 The focus about coronavirus is now shifting to the propagation of the epidemic outside China. The emergence of an autonomous contagion point in South Korea, in a city where 5% of the national population lives was from this point of view already concerning. The steep rise in the case count in Italy (over 150 as we write these lines) is another bad signal.

The sudden rise in covid-19 cases in Italy changes the picture for the European economy anyway. Indeed, the activity restrictions already imposed by the national and regional authorities will be implemented in some of the country’s most crucial regions in terms of output. Lombardy, Veneto and Emilia-Romagna alone account for 40% of Italian GDP and 6% of total Euro area GDP. AXA IM analysts suspect that –short of a swift resolution of the epidemic –the demand-side effects will emerge in the next batches of data.

“We think the early consensus of a swift “v shape” recovery is looking increasingly shaky. Last week we highlighted the fact that the dataflow in the US had not been stellar since the beginning of the year, with weak retail sales for instance, while so far consumer spending had been the bedrock of US cyclical resilience.”

“Evidence of this “soft start to 2020” in the US is accumulating, with the Markit services PMI falling in contraction territory to 49.4 from 53.4 in January, well below expectations of 53.4. True, the market’s preferred indicator of this nature in the US is the ISM version, but everyone –your humble servant included-is counting on the US relative insensitivity to Eastern Asian demand to provide support in the first half of the year. If this is wrong, we have a big problem on our hands.”

Last week a speech by ECB Vice-President de Guindos still conveyed a level of cautious optimism, highlighting the improvement in the dataflow in the last few months and presenting the coronavirus crisis as an additional risk to a balance already tilted to the downside rather than an issue which should already affect the central bank’s baseline. Philip Lane, the ECB’s Chief Economist, went as far as stating explicitly in an interview withBloomberg on Friday that the central bank’s base case was that the epidemic would produce a “v shape shock” which would not warrant an immediate reaction from the central bank.

“This is “brave” in our humble opinion. Still, even before the news broke of the epidemic spreading in Italy we are convinced that the staff in Frankfurt was already engaged in contingency planning, and the fact that de Guindos chose to conclude his speech by repeating the ECB’s line on their readiness to act if need be, irrespective of the “strategy review”, was interesting . We look here at the likely options.”

The market is already pricing a two third probability of another deposit rate cut by the end of the year. That is an understandable reaction tothe ECB’s forward guidance –they “expect policy rate to remain at their present level or lower” –but given the increasingly ambiguous effect of such a move we think the bar for such action is quite high. The least disputed impact of cutting the deposit rate would be a currency depreciation. It could be tempting to offset a drag on the volume of foreign demand by reducing the price of exports. However, this is what the market is already spontaneously generating with a 3% decline relative to the dollar since the beginning of the year, which has accelerated since the day the Chinese authorities imposed travel restrictions in Hubei .And obviously if the Euro area now needs to deal with an internal source of demand compression (Italy), manipulating the currency makes even less sense.

Renewed expectations of an additional ECB rate cut may have contributed, but analysts at AXA IM suspect what is happening is more a generic rally in favour of the dollar given the US’ lesser sensitivity to Eastern Asian demand.

“Indeed, the euro’s depreciation relative to a basket of 12 currencies has been significantly lower than that of the bilateral euro-dollar exchange rate. The current configuration is more consistent with a “strongdollar” than with a “weak euro”.”

Given the sensitivity of the US administration to anything that looks like “currency manipulation” we could not discard the risk that another depo cut would be met with additional stress in the US/EU already tense trade relationship.This would only be one of the “side effects” of taking rates further into negative territory. Although the ECB’s chief economist Philip Lane stated publicly two weeks ago that it is “clearly not the case” that we have reached the “reversal rate”, a majority of the Governing Council is very reserved about additional cuts, even with more “tiering”.

Would quantitative easing (QE) be in play? Those who opposed or had reservations on the September package often justified their position by arguing long term interest rates were already very low. The same would apply today, with the German 10-year yield already back below -0.4% and Italian 10 year yields under 1%. AXA IM experts a suspect that those yields would have fallen further by the time the ECB decides to providesome additional accommodation. Given the very sensitive political nature of purchasing sovereign bonds and the lack of space before the central bank hits its limits there, we think the ECB will look at all other options before agreeing to another uptick on this leg of QE.

The only scenario where AX IM could see the ECB quickly drawn into more action on government bonds is one in which sovereign spreads would start rising in some countries, and obviously Italy is a natural candidate for that. Beyond the potential economic cost of the epidemic there, we would mention the possibility that the domestic political situation sours, with the management of the covid-19 crisis being used by the oppositionagainst an already fragile coalition. This is consistent with a rise in Italy’s risk premium, everything else equal, even if our contention is that the mere possibility of ECB action would act as cap on market movements.

“As an extreme solution, we could see here some justification for the ECB to diverge more from the capital key to provide temporary relief to the Italian bond market, butwe are not there yet.”