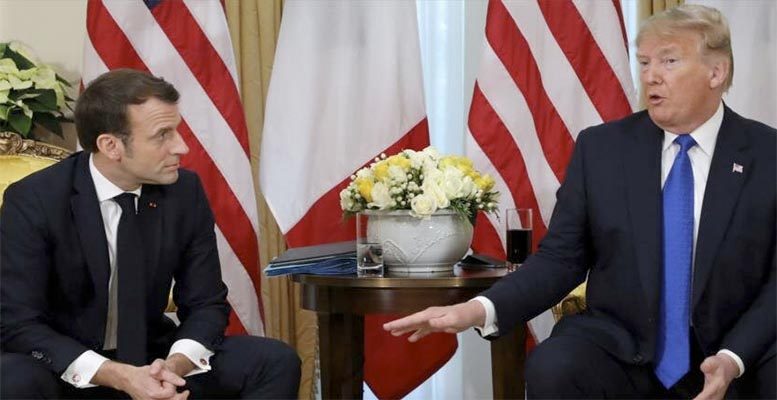 Peter Isackson |Profiting from his return to Europe to celebrate the 70th anniversary of NATO, US President Donald Trump used the platform to launch the opening salvos in a new skirmish in his endlessly improvised “America First” trade wars. On the same day, we learn that Brazil and Argentina are also under attack.

This time, Trump claims to be retaliating against France’s effort to resist the unfettered domination of the giant American tech monopolies that have spread across global markets, leaving little margin of maneuver to potential competitors who can’t match their size and reach.

Encouraged by the US political establishment — despite the occasional misgiving about their nefarious effects on democracy and open markets — the quartet of leaders composed of Google, Amazon, Facebook and Apple has become a prime source of concentrated profit for a tiny percentage of the American population. In recent years, they have consistently pushed the stock market ever upward toward the stratosphere, a fact that President Trump takes great pride in.

Trump has announced he will be slapping 100% tariffs on a wide range of France’s famous luxury goods. This means the US market for these goods will soon be restricted to the billionaire and multimillionaire class, depriving LVMH, L’Oréal and Hermes of future sales to that very lucrative market segment that consists of the less affluent part of the population. These people are sensitive enough to react negatively to the doubling of the price of goods that they don’t really need but covet for their prestige factor. As for Trump, who prefers McDonald’s to foie gras and coke to champagne, he will experience no inconvenience.

France 24 describes the thought process behind the tariffs: “The US Trade Representative’s office said its ‘Section 301’ investigation found that the French tax was ‘inconsistent with prevailing principles of international tax policy, and is unusually burdensome for affected U.S. companies,’ including Alphabet Inc’s Google, Facebook Inc, Apple Inc and Amazon.com Inc.”

The terms of Trump’s threat are clear. The president believes the US has the exclusive right to define the tax laws of other countries that access services provided by US companies in what have become captive markets. The Europeans had no choice but to capitulate to the power of the US tech giants whose experts discovered how to profit from the diversity of Europe by seeking the most favorable tax arrangements. In contrast, the US, as a unified nation, can simply deploy its influence and Trump’s facility for imposing sanctions to punish each individual country in Europe that fails to comply with the global strategies of American companies.

Here is how the US Trade Representative (USTR) explains it: “The USTR is focused on countering the growing protectionism of EU member states, which unfairly targets U.S. companies, whether through digital services taxes or other efforts that target leading U.S. digital services companies.”

What is the French digital tax in question? Euronews describes it as a 3% levy “on big technology companies with revenue of more than €750m ($830 million) of which at least €25m generated in France.” It describes how the “tech giants are able to pay little or no corporate tax in countries where they do not have a large physical presence” by declaring most of their profits in countries their headquarters are located.”

The French reject the accusation that the law “unfairly targets U.S. companies” because it aims at a type of company, not a particular nationality. It just so happens that the US has historically permitted and now encourages these de facto monopolies, despite occasional noise from Congress about antitrust investigations of Facebook in particular.

Euronews provides the key to understanding the historical context of this trade war: “The French government says the tax will end if a similar measure is agreed internationally.”

In other words, the point of France’s initiative is not to contest US supremacy or punish American firms. Nor is it primarily to generate new revenue from the activities of American companies that profit from commercial activities in the French market. Rather, it is a principled effort to establish fiscal norms applying to commercial activity exercised by powerful international companies who have found devious ways designed to exploit a nation’s marketplace while escaping from its tax policies.

The law in question only applies to rich and powerful companies, since those earning less than €750 million globally or less than €25 million in France would be exonerated. The French see this as a step toward creating an even playing field for companies of any nationality that compete with the tech giants. Smaller companies unable to make the kinds of investments and deploy the kind of organization that permit the tech companies to dodge the local law would not be subject to the constraints the new law would impose on firms that use their vast resources to avoid paying taxes.

The US government sees this as discriminatory and, in purely legal terms, they are right. Europe is looking for a way to discriminate not against US tech companies but against global monopolies, whatever their nationality. The Europeans are seeking to encourage smaller enterprises while at the same time harmonizing as best as they can the principle of tax revenues within their own free trade zone.

One simple comparative statistic tells the story from the European point of view. “The European Commission estimates that on average traditional businesses face a 23% tax rate on their profits within the EU, while internet companies typically pay 8% or 9%,” Euronews reports. The reason the tech giants pay so little is that, while they generate sales across the entire European economy, they are free to decide in which countries they will set up their headquarters with the sole criterion of funneling profit to places where taxes are the most favorable.

This practice violates the notion of competitive equality. Size and wealth provide a wildly disproportionate competitive advantage. And that is before taking into consideration the financial flexibility, the political influence and the comparative psychological clout the big tech companies exercise in the markets where they operate.

Politicians in the US, including Donald Trump, understand that monopoly is synonymous with power. US monopolies have become agents of American power in the world, the pillars of an empire. Many of them use their global flexibility to avoid paying taxes not just abroad but also at home, which penalizes the average American taxpayer and contributes to the growing inequality of income and wealth.

But President Trump knows that modern monopoly promotes the strength of the empire, so his government will defend “American interests” against the wily Europeans seeking to challenge an economic empire that increasingly tells its vassal states how to behave. In so doing, he is defending American corporate interests against the interest of the American people.

Despite Adam Smith and David Ricardo’s theories about the wealth of nations and the advantages of free trade, geopolitics in a capitalist system has never been about seeking the most efficient means of fulfilling human needs. Ever since the creation of the British East India Company in 1600, it has always been about consolidating power and wealth and serving the interests of a class of people who work together to co-manage the political system and the global economy. The more power and wealth become concentrated, the more the most powerful nations will focus on exercising and developing that power.

China, not Europe, represents the real challenge for the US today. Unlike Europe, China has no tax havens inside its own borders and no need to develop debates about what is fair or unfair. In contrast to both, France has decided to move ahead to set a precedent that may pave the way toward global legislation. As Euronews explains, “Brussels’ efforts stalled since an EU-wide levy has to be approved by all members, but Ireland, the Czech Republic, Sweden and Finland raised objections.” France hopes that its example will provide a model for a global initiative.

The Americans may be right when they claim that the French tax will be “unusually burdensome for affected U.S. companies.” Pity the tech giants who may be saddled with a new burden that might compromise their prosperity. But in a world in which nationalism and capitalism combine to institute injustices that, more often than most would like to admit, include systemic racism, shouldn’t this be thought of — to quote Rudyard Kipling — as “the white man’s burden”?