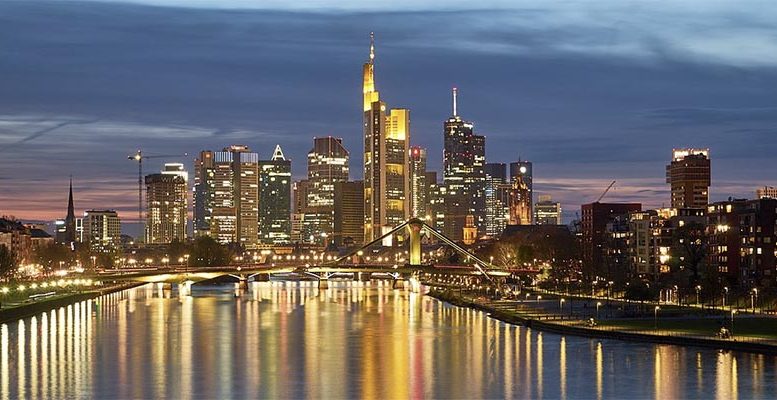 Frankfurt skyline. It is the European Union economic and financial capital

Dr Hans-Jörg Naumer* (Allianz Global Investors) | Who is going to pay? That question is heard quite often in connection with the corona-related fiscal packages. Quite rightly. Governments have adopted huge packages to stabilise their economies. While there is no shortage of suggestions of how the new public expenditure and old debt is to be funded, many people seem to be overlooking the fact that the current low or negative interest-rate environment is already making a major contribution to debt reduction. This article will analyse the impact of implicit interest rates, growth and inflation on debt ratios in Germany, France, Spain and Italy.

The Corona Pandemic and the Issue of Financing

The G-20 countries have implemented an unprecedented level of fiscal countermeasures. Take the European Union, for example: The planned fiscal packages here amount to just under 21% of gross domestic product (GDP).

The packages differ widely by country, both in terms of amount as well as composition. In general, these are measures that will directly affect expenditures, but also include guarantees and loan guarantees. They can be drawn on as needed to avoid difficult situations.

There is a question about debt sustainability. Or more precisely, who is going to pay for this? We should not overlook the debt-reducing effect that will be provided by extremely low, and even negative, bond yields. Countries that have access to cheap refinancing have less reason to fear how they will repay the mountain of debt. Ideally, it will repay itself over time – thanks to yields, inflation and growth. Indeed, the “Negative Interest Club” continues to grow, as shown in Figure 1.

Figure 1: Yield as a percentage of the market capitalization of bonds

Across nearly all maturities, German government bonds no longer offer a positive return. Negative yields are now a familiar part of the picture in the bond markets of other European and non-European countries, as well. Globally, just under 60% of the global market for government bonds now (end of May 2020) have a yield of below 1%. Just under 20% of all government bonds have a negative yield – worldwide. In nominal terms. In other words, this does not even include the loss of purchasing power caused by inflation, regardless of how low it may be. Even for Spain, the implicit interest rate has decreased significantly.

The Impact of Low/Negative Interest Rates

Can the yield/interest rate level help countries to grow out of their debt over time? This question is examined below in an analysis of scenarios for four Euro zone countries (Germany, France, Spain and Italy). The primary considerations build on Contessi, who in turn relies on Domar.

The Mechanics of Reducing Debt

The scenario analyses examined the trend in debt-to-GDP ratios through the formula dt+1 = (1+rt+1) / (1+gt+1)*dt – pbt+1 based on Contessi and Domar (see box). The debt-to-GDP ratio (“d”) compares the level of debt of the country or region under review to the gross domestic product (GDP).

For public budgets, the primary balance is defined as the difference between government revenues (excluding net borrowing) and government expenditures (but excluding interest payments on government debt).

For the current time period (the years 2020 and 2021), the European Commission’s estimated debt-to-GDP ratios (as of May 2020, i.e., including the fiscal measures already agreed to within the context of the pandemic) served as the starting point. Here, we analyzed how the real implicit interest rates (“r”) at which public budgets are refinanced affect the primary balance (“pb”), initially assumed to be in balance (in relation to growth) over the period under review, and (real) growth (“g”) through this formula.

To further analyze individual variants, assumptions were then made about inflation (“p”) and the primary balance (“pb”). For real growth, the assumptions used the OECD’s long-term estimates, which extend to the year 2060. The modeling for implicit interest rates applicable to the respective budgets uses the European Commission’s current estimates for the year 2021 (see Table 1).

Since German government bonds serve as a de facto benchmark for pricing bonds from other Euro zone countries, for those bonds/countries yield spreads on the long-term interest rate were included in the calculation which are equal to the average p.a. yield spread of the respective country vis-à-vis Germany for the years 2008 to 2020. The intention was that deviations in the average duration of the budgets’ underlying government bonds should also be taken into account. It was assumed that there will not be any changes in creditworthiness over the next few years/decades, i.e., that there likewise will not be any deterioration in creditworthiness, that would lead to higher credit spreads and, therefore, to higher interest rates.

So, will negative/low interest rates lead to a decrease in the mountains of debt? For more on this, consider the following scenarios.

The debt-reducing effect of additional decreases in implicit interest rates is obvious – albeit also quite varied – in each country analyzed. It depends on the debt-to-GDP ratio at the beginning of the analysis. This is demonstrated by the base scenario, which assumes a balanced primary budget. Here, the following applies: the higher the initial level of debt, the less pronounced the effect will be. It also becomes clear that the higher the average inflation rate, the easier it is to reduce the debt. For inflation, a range of +/- 1% around the European Central Bank’s inflation target was examined.

will reach its lowest point in 2037, at just over 133. After that, it will rise to 204 in 2060. With the lowest inflation rate of 1%, the debt-to-GDP ratio will increase steadily to 300 in 2060. Therefore, substantial additional efforts will be required to achieve a reduction in debt (see Figure 2d).

Figures 2a to 2d: Trend in the debt-to-GDP ratio with a balanced primary budget, using Germany, France, Spain and Italy as examples

A sustained primary surplus of 1% p.a. would make a noticeable contribution towards reducing the debt-to-GDP ratio.

In Italy, none of the inflation scenarios will lead to a sustained decrease in the debt-to-GDP ratio, despite annual primary surpluses. If the average annual inflation rate is 1%, Italy will initially decrease its debt-to-GDP ratio to 144 in 2034. After that, it will rise back to 236 by 2060.

For debt reduction, the decisive factor is the debt-reducing effect of low implicit interest rates. The debt-reducing effect is noticeable for each of the countries analyzed. In Italy’s case, however, without an additional primary surplus, a decrease in the debt-to-GDP ratio is only achievable with an inflation rate which is above the ECB target rate over the long term. The future trend will be highly dependent on the future level of implicit interest rates.

Again, the following analyses of Spain and Italy demonstrate the importance of the low yield level, which ultimately also affects the countries’ implicit interest rates.

Spain as an example: If the implicit interest rate for 2020 were 3.4% (equal to the average implicit interest rate for the years 2008 – 2020) instead of 2.25% (European Commission), the decrease in the debt-to-GDP ratio would be noticeably less favorable. Without further measures, the debt-to-GDP ratio for all three inflation scenarios would continue to increase steadily (Figure 3a). Italy as an example: Similarly, the implicit interest rate in Italy should be 3.44%, instead of 2.4%. Even in this case, the debt dynamics are clearly more pronounced. Only in the – unlikely – case where the inflation rate is 3% from 2022 on, assuming everything else remains the same, there would be a temporary decrease in debt (Figure 3b).

Figures 3a & 3b: Trend in the debt-to-GDP ratio, using Italy and Spain as examples, with a balanced primary budget and initially higher implicit interest rates

The higher the inflation rate is and the lower nominal yields are – or the longer low/negative interest rates persist – the easier it is to achieve a reduction in debt. In the end, creditors, i.e., subscribers of government bonds, will pay for a portion of the debt reduction themselves, by investing at real interest rates that are below the real growth rate.