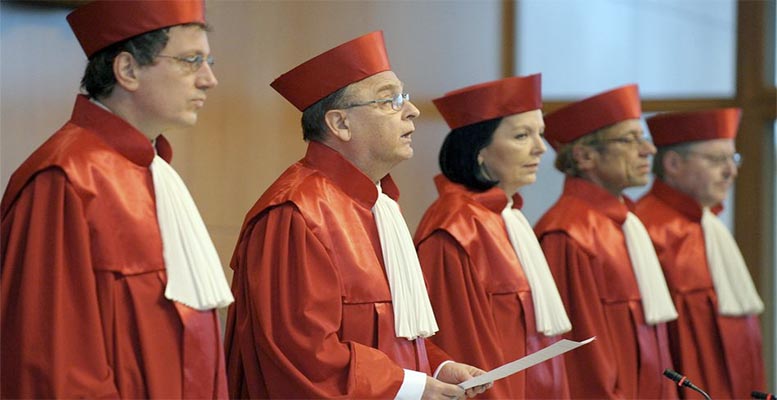 The German Constitutional Court has attacked the EU Court of Justice

The German Constitutional Court surprised everyone yesterday with a ruling that some of the European Central Bank (ECB)’s actions, carried out as part of its 2015 bond purchase programme (PSPP), are unconstitutional. This decision clashes directly with the judgement of the European Court of Justice (ECJ). In its ruling, the German Court partially dismissed the complaint filed by a group of German academics and businessmen against the PSPP launched by the ECB in 2015, although it considered it disproportionate. The decision does not call into question the entire debt purchase programme, but rather the part relating to the Bundesbank’s intervention. The Court has ruled that the programme exceeded its powers without taking into consideration the proportionality of the measure as a tool to achieve the inflation target laid down in the euro supervisor’s monetary policy. This states that the inflation rate should be close to, but below, 2%. It also criticises the implementation of purchases by the ECB, in particular the fact that it did not respect the country purchase limit (in proportion to the size of each country’s economy and not buying more than one third of the total eligible debt of any country). So the German court maintains that the ECB must justify and provide documentation to show that such a proportionality balancing test took place, allowing a period of three months for this purpose. Otherwise, the Bundesbank would have to stop participating in the PSPP’s purchases during those three months.

The German Constitutional Court has attacked the EU Court of Justice (ECJ), which considers this debt purchase to be within the ECB’s mandate. But the Court points out that, having delivered its judgment without a thorough study of the proportionality aspect, the ECJ’s decision was “ultra vires”, i.e. outside its jurisdiction.

Renta 4 experts understand that what the ECB has to prove is that it does not distort the market in relative terms:

“We believe that it does not do this, in as much as it buys the average life of the outstanding debt, in line with the capital keys. But it could pose problems in skipping the limits of the capital key and the 33%.”

The market reacted with a 1% depreciation of the euro against the USD. Germany’s internal rate of return did not move and the only one that saw more reaction was Italy’s, +10 bps to 1.87%. That said, we can expect to see some volatility in spreads over the next three months. Perhaps that is why the Italian Prime Minister was very clear this morning about the German Court’s ruling: “ECB independence is at the heart of European treaties,” said Giuseppe Conte.

The ECB was responding appropriately to the German judicial challenge by taking note of it. However, at the same time, it has made it clear that its Council remains fully committed to “doing everything within its mandate to ensure that inflation is raised to levels consistent with its medium-term objective and that monetary policy measures, taken to achieve the objective of maintaining price stability, are transmitted to all parts of the economy and to all jurisdictions in the euro area.” In other words, it also reaffirmed that it will not allow financial fragmentation in the euro area, based on a court ruling which resurrects ghosts from the past.

If the German Constitutional Court finally rules that the Bundesbank should refrain from buying bunds (it cannot tell the ECB what to do), it would need to be seen whether the gap left by the Bundesbank as a buyer of bunds could be filled by another buyer.

However, regardless of how the ECB and the Bundesbank justify their decision to implement the PSPP, the Constitutional Court’s decision opens a “Pandora’s box” of European justice. According to Link Securities:

“From now on, any constitutional court in the countries which make up the European Union (EU) can try to block decisions made within the EU.”

“This is bad news for the attempts to achieve greater political and fiscal integration that some governments in the region have been promoting. And even more so in a situation as complex as the one the region is facing at the moment. Most EU countries, especially those in the south, are facing a very tough economic crisis from which they will not emerge without the support of the rest of the EU members.

This decision raises fears the ECB will have less room for manoeuvre in its asset purchases. But it should be noted that the German Constitutional Court has specified that its verdict does not affect the extraordinary purchase programme (PEPP), worth €750 Bn, which was launched in the wake of the coronavirus pandemic.

The ECB’s bond purchase programme has always been highly controversial in Germany, where critics argue that the central bank exceeds its mandate by illegally financing governments and exposing taxpayers to potential losses.

For Intermoney analysts, the German Constitutional Court’s ruling on the ECB’s public sector debt purchase programme resurrects “problems from the past” by calling into question Lagarde’s convenient commitment to unlimited action.

“Fortunately, the statement contained important nuances and also gave rise to great legal doubts at a Community level, which allowed the market to put it into perspective.”

Indeed, the European institutions remind us of the primacy of Union law and the fact that the judgments of the EU’s Court of Justice are binding for all national courts.