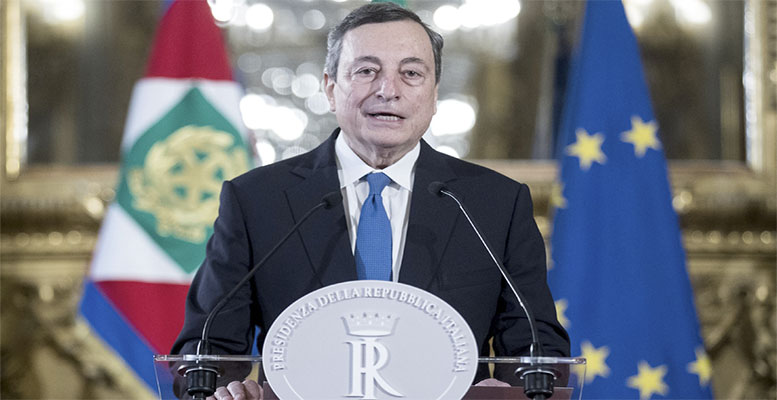 Piergiacomo Braganti (Wisdom Tree) | Entrusting Mario Draghi, former governor of the European Central Bank, to form an institutional Government had the immediate and visible effect of pushing the 10 Years BTP/German Bunds spread below 100 bps, at the lowest level since 2015. It revamped investors’ interest in Italian banks.

The financial markets have a clear memory of the decisive role he played, as President of the ECB, in autumn 2011, when the Quantitative Easing (“QE”) immediately turned off the alarm on Italian Government Bonds.

The subsequent launch, from 2012, of innovative monetary policies such as long-term refinancing and zero or negative rates (ex. TLTRO) helped the country support its debt and Italian banks in more easily disposing of their impaired loans.

Mario Draghi will have to work for an effective and timely use of the Recovery Fund and implement several structural reforms.

Investors believe that Mario Draghi has the experience, credibility, and authority to better manage this process implementation, which will, directly and indirectly, affect Italian banks in a positive way.

1.-The design and implementation of the Recovery Plan should take place with banks’ involvement and household savings, which grew further during the pandemic.

2.-If in the short term, it is reasonable to think of an extension of the current State guarantees, in the medium term, the Government could favour the transformation of debts into corporate capital, with the primary involvement of the commercial Banks.

3.-Draghi’s experience in the credit sector should also lead the new Government to implement measures that facilitate the transmission of monetary policy to businesses and households and the disposal of bad loans.

4.-Draghi’s Govt should push for mergers to increase concentration in the sector, as he did since the ECB time.

5.-The Draghi-led Government’s credibility could improve Italy’s dialogue and negotiation capability with European partners, especially when the fiscal and stability rules of the credit sector, now somehow attenuated or suspended, will need to be reactivated and reformulated.

6.-The confidence of Mr Draghi’s markets is beneficial for Italian banks and insurance, heavily exposed to “sovereign” risk.

7.-Some Italian banks are ready to pay old dividends, approved and not paid, when the restrictions set by ECB, valid until 30 September 2021, are removed. This could happen in the 4th quarter of this year.