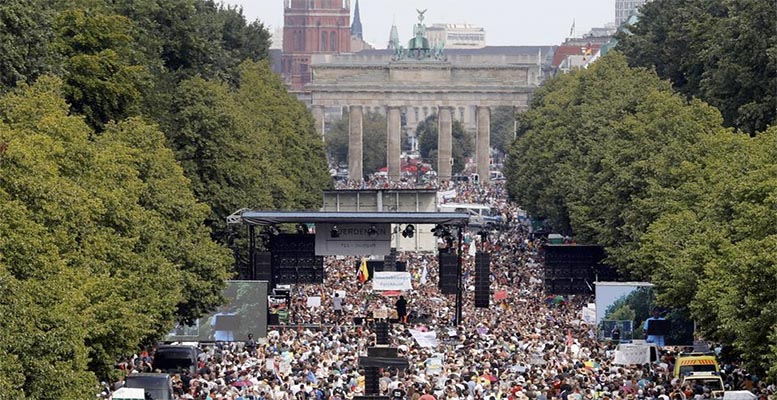 European Views | Protests against pandemic lockdown measures have been gaining momentum across the world, but it’s events in Germany that have caught international attention. The latest demonstration in Berlin at the end of August drew some 30,000 people out of their homes – and the sheer range of ideologies on display from anti-vaxxers to ecologist to the far right, has re-opened a debate in the country about what it means to participate in the modern-day political process.

The fact that the Berlin demonstration reflected a broader dissatisfaction with the overall political scene is an unnerving realization at a time when coronavirus-related challenges and ongoing immigration issues are intersecting to form a toxic cocktail of emotions – one that is proving to be an ideal breeding ground for radicalisation. After all, the leading organiser of the so-called German COVID-19 rebellion is the group Querdenken 711, the emerging epicentre of Germany’s anti-globalist Corona-movement.

The silence of Gen Z

Despite Chancellor Angela Merkel sitting comfortably on a 71 percent approval rating, a broad swathe of the country’s population remains deeply – and vocally – opposed to the government’s COVID-19 response. One such example is German-Thai epidemiologist Sucharit Bhakdi, whose claims on YouTube that coronavirus deaths are both exaggerated and linked to air pollution have garnered more than 8 million views to date. Other influencers, like the chef-turned-right wing mouthpiece Attila Hildmann, are seeing a rapid growth in followers of their anti-lockdown rhetoric in Germany and Europe in general.

All this poses a serious risk to the EU and its broader ideological project. That radicalised masses are becoming the norm and the primary actors in socio-political discourse mirrors all too closely the chaos of the 20th century. The imbalance of voices is tragically exacerbated by the silence of another key demographic, which shuns political participation altogether. This group is the Gen Z, the age cohort born between 1996 and 2015.

Simply put, Gen Z isn’t voting. While it’s true that not all of that cohort are eligible to vote yet, the fact that those who can chose not to is just the more concerning, because politics develops to their detriment. In Britain’s 2016 EU Referendum, barely a third of 18-24 year olds cast a ballot, compared to more than 80% of voters over 55. In the 2019 EU Parliament elections, young people had the lowest turnout among all age groups. The main reason for youth disengagement? Mainstream parties remain deaf to their needs and demands.

Fortunately, it’s not too late to revive belief in the European vision, especially if young people are empowered to participate in the political process and express themselves as members of a democratic society. In fact, Gen Z is particularly concerned about standing up for their rights and the rights of others; the threat of climate change, for example, is forcing young Europeans to engage politically in ways that go beyond the ballot box.

After all, the best way to accurately measure youth political engagement is to follow what’s being said on social media platforms. A US survey by French social networking app Yubo revealed that nearly 90% of respondents supported the Black Lives Matter movement, and 77% had already attended a demonstration in support of equality for Black Americans. A whopping 62% agreed they were willing to be arrested during a peaceful protest to support the cause of equality.

The Yubo poll also found that Gen Z users are turning to social media to extensively express their support for the Black Lives Matter movement. Almost three-quarters of respondents said they are using Instagram to express their support for equality, with a substantial proportion similarly turning to TikTok and Twitter to make their voices heard – and educate themselves on actions they can take to support racial justice.

Such attitudes regarding equality and social justice are likewise prevalent among European youths. Leveraging this fervour is essential to the task of rejuvenating the European project as a whole. Indeed, the Yubo app – geared toward the Gen Z audience and equipped with special security measures in place to ensure the safety of its young user base – is one of those networks that could serve to feel the pulse of Gen Z in this time. The app has seen explosive growth in recent months, and with young people confined to their homes, the app has seen a 290% jump in live time and 300% more streamers than before the pandemic.

Encouragingly, political mobilisation via social networks has already proved an effective strategy on other platforms. Anti-Trump organisers on TikTok, for example, successfully sabotaged the President’s Tulsa rally in June by encouraging users to sign up for free tickets in droves and thereby inflate attendance numbers. Moreover, it’s a strategy these “hottest TikTokers” seem determined to sustain.

…and revitalise the European project

Europe, however, isn’t quite there yet. But awareness is nonetheless increasing among the political elites that there’s a disconnect between them and the generation that is meant to carry the European project forward. It’s no surprise that ever more projects with the objective to motivate the Gen Z to participate politically are being launched. This goes hand in hand with the gradual realisation that the long-held image of the “radical and idealistic youth” is becoming outdated and is instead replaced by a new consensus that a person’s political orientations are set early in life and change little afterwards.

This means that the approach to wooing voters doesn’t necessarily need to change – but the themes, as well as knowing how to tap into the voter base itself, does require a transformation. For the EU and its parties, a greater understanding of new social networks is an often-overlooked avenue of action that could be a game changer in welcoming young voters into the political discourse. With the very nature of European democracy seemingly changing for the worse on all sides, this is a demographic that policymakers can no longer afford to ignore.