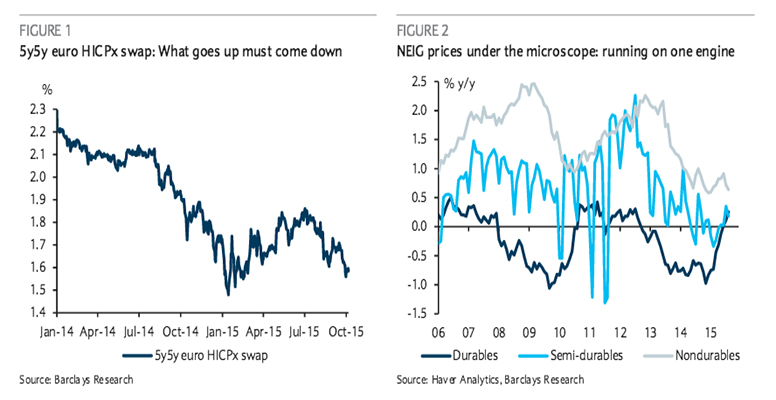 BARCLAYS | We have been arguing for some time that we see no grounds for attaching a high probability to a reflation scenario for the euro area, at least in the near term. After the ECB embarked upon its QE program me, markets swiftly pared back pricing of deflationary risks and, ultimately, by mid – year had almost priced the ECB delivering its inflation mandate over the medium – to longer – term .

While understanding the reasons that financial markets reacted so positively, we warned that macroeconomic fundamentals were at odds with the sharp rise in headline HICP inflation observed since the start of the year. A few months later, most of the downside risks to food and energy prices we flagged materialised; meanwhile, some of the potential upside surprises within underlying components identified (NEIG and services prices) did not come in with the impetus we would have expected.

The extreme volatility of unprocessed food and energy prices, which were almost entirely responsible for the unexpected recovery in headline inflation between February and May, confirmed our view that they are not the best indicators for assessing whether a sustained return of inflation towards the ECB medium – term mandate is likely.

Unprocessed food prices experienced abrupt movements as a negative favourable base effect from last year faded, while euro – denominated oil prices declined about 25% between May and September. Unprocessed food prices went from +2.1% y/y in May to 1.4% in July and then back up again to +2.7% in September, while energy inflation contracted f rom – 4.8% in May to – 8.9% in September (January: – 9.3% y/y). Consistent with this, 5y5y inflation swap breakevens have collapsed to 1.58% lately, therefore returning to trade around mid – February levels.