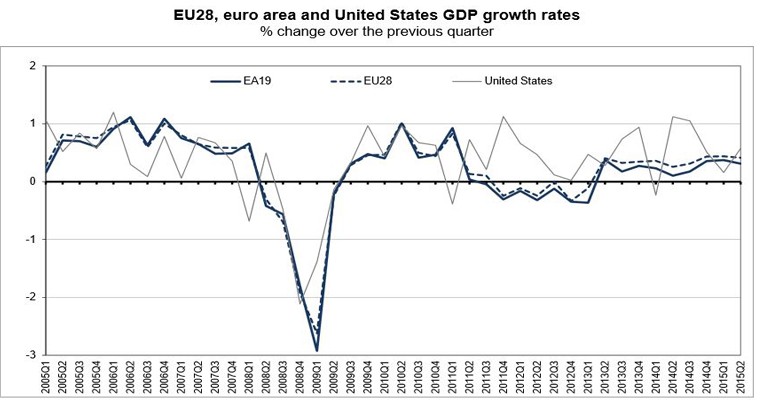 In the euro area, seasonally adjusted GDP rose by 0.3% and by 0.4% in the EU 28 during the second quarter of 2015,  compared with the previous quarter, according to flash estimates published by Eurostat.

The surprise came from Greece, where Hellenic Statistical Authority (ELSTAT) announced yesterday that the GDP in the country had grown by 0.8% in the second quarter of 2015, according to the flash estimates. On the contrary, Finland registered a negative GDP growth -0.4%, being the only country with a shrinking economy in Europe.

Germany’s GDP rose 0.4% on the first quarter of the year while in France GDP stagnated again (vs. +0.3% expected by consensus ). Italian GDP rose by 0.2 % (vs. 0.3% expected). Spain was again one of the fastest growing countries with a GDP growth of 1%.

Meanwhile, reports on European inflation in July showed stabilisation, but at a very low level, highlighting concerns about the pass-through of CNY weakness to European inflation. ‘Market-based inflation expectations fell rapidly earlier in the week’, noted Barclays’ analysts. German and French CPI inflation for July was 0.2% y/y, broadly in line with consensus, while it was zero in Spain.