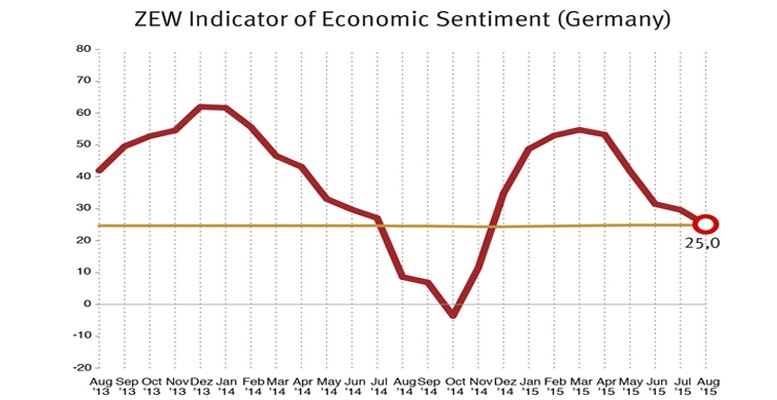 Although the consensus of analysts expected an improvement after the relaxation of uncertainty on Greece, the ZEW Indicator of Economic Sentiment for Germany declines again in August 2015. Decreasing by 4.7 points compared to the previous month, the index now stands at a level of 25.0 points (long-term average: 24.9 points).

‘The German economic engine is still running smoothly. However, under the current geopolitical and global economic circumstances a substantial improvement of the economic situation in Germany over the medium term is improbable. That is why economic sentiment has declined,’ says ZEW President Professor Clemens Fuest.

The assessment of the current situation in Germany has improved slightly. Increasing by 1.8 points, the index now stands at 65.7 points.

The financial market experts’ sentiment concerning the economic development of the Eurozone has improved. ZEW’s Indicator of Economic Sentiment for the Eurozone has increased by 4.9 points to a reading of 47.6 points. Gaining 4.1 points in August 2015, the indicator for the current situation in the euro area has reached a value of minus 10.3 points.