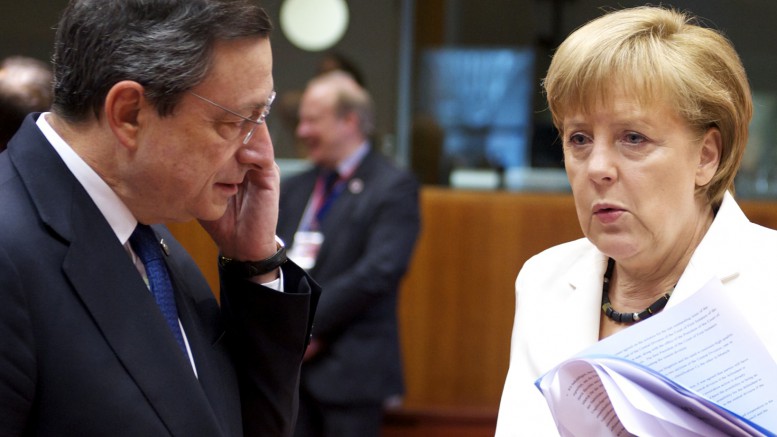 However, the acquisition of fixed income instruments as covered bonds for this year, as well as the securitizations of ABS loans (Asset Backed Securities) in 2015, has led to a tremendous stir in Germany, where Mario Draghi’s recipes are considered high risk. Furthermore, the risk that the Europhobe Alternative for Germany party (AfD) poses the government increases European uncertainty. AfD considers Europe an empty cell without present or future.

“The ECB has become the final dumping site of the atomic financial garbage,” says the economic newspaper Handelsblatt. Along that line, the president of the IFO Institute, Hans-Werner Sinn adds: “It accepts plain rubbish”; while financial expert Bert Van Roosebeke, from Fribourg’s European Policy Centre (EPC) says that “the risk is huge” and that “the ABS purchases could lead to financial losses and conflicts of interest.” For his part, Jen Weidmann, president of the Bundesbank, sees a risk for German taxpayers.

The fact that Mr Draghi accepts everything –including Greece’s and Cyprus’ junk bonds, turns the ECB into a bad bank, according to some of the more ruthless critics such as Sinn, who thinks that this European entity illegitimately finances banks within EU States.

Mr Draghi’s path is so dangerous that many countries in crisis are unable to make a move, according to Marc Beise, analyst at the Süddeutsche Zeitung. That is precisely the case of France and Italy. Both countries have said “enough” to Angela Merkel.  Both countries want more employment and growth. However, their economies simply do not take off, and they have asked for more time so as to apply the necessary reforms and reduce their deficits.

The Italian, Matteo Renzi, doesn’t want to want any more advice from Ms Merkel, who wants to boost the Southern countries’ competitiveness by forcing them to “do their homework.” Mr Renzi is proposing a reduction in the speed of reforms because “Europe is not a class full of teachers and students.” The French government is in line with this view, and proposes to reduce its fiscal deficit gradually so as not to risk weak growth. Nonetheless, by the end of October, the Commission will reject Paris’ and Rome’s budget because they exceed more than 0.5 percentage points of the deficit agreed in Brussels.

In the light of all this, Germany is between the hammer and the anvil. On the one hand, everybody expects more from the country. On the other, the American rating agencies have sounded the alarm because many Eurosceptic parties are gaining ground in the core of Europe –such as the German Alternative for Germany (AfD), which presents itself as the party for good German taxpayers, whose savings and welfare are at risk due to the bailout of European banks and indebted peripheral countries.

However, the rise of the Europhobe and conservative party AfD is not just a concern outside Germany, but also within the same German government. While conventional classic parties keep shrinking, AfD grows and grows. So far, the strategy of Ms Merkel’s Christian Democratic Party CDU has been to ignore it.

The Christian-Democrats have started to relentlessly criticise the AfD’s demagogues after their increase in popularity in the last three last regional elections. Minister for Finance, Wolfgang Schäuble, made it clear:

“It is not correct that the AfD leader, Bernd Lucke, who is a professor of Economics, supports the nonsense that Germans would be better off without the Euro. We all know that with less European integration, our welfare would decrease.”

AfD was created half a year before the last general election, however, in the European elections they won up to seven seats.

“We are very clear about the Euro: we convince the southern countries of leaving the Euro or else the countries that fulfil the Maastricht criteria will leave it instead. If nobody wants to come with us, there is no problem. Germany can go by itself,” the former executive of IBM and now vice president of AfD, Hans-Olaf Henkel warns. Since the foundation of the party, they have managed to increase fivefold the number of party members.

Hans-Olaf Henkel answered Mr Draghi’s plans by following the ideological approach of his Europhobe party: “Instead of preventing the spread of the fire caused by the high debts in the South and also in France, the ECB would prefer that the sparks reach Germany. After all, it is the Germans who assume the risk of the so-called junk bonds.”

Conversely, the latest analysis by the rating agency Standard & Poor’s didn’t impress Germany. The agency said that the rise of AfD is a risk for the stability of those EU countries suffering from the crisis. Gustav Horn, director of the Macroeconomics and Economic Research Institute IMK, says that S&P’s credibility is quite questionable –especially taking into account that this agency had negative ratings in 2009 and forced the implementation of austerity policies.

S&P also considers that the rise of AfD represents a risk for the German government, which could change its path towards more conservative ground, thus leading to an increase in interest rates. According to Moritz Kraemer from S&P, countries in crisis would have to pay for such increase in capital markets.

In view of this conflict, heads of the central banks and finance ministers of the G20 countries have reiterated that it is time to grow and to boost global economic growth by two additional percentage points until 2018. Thus, the president of the Commission, Jean-Claude Juncker, has submitted a proposal aimed at boosting growth without going into debt, instead using the money of the European Stability Mechanism (ESM). But Ms Merkel rejects this approach. The German Finance minister, Markus Söder, is even more drastic:

Which is the appropriate strategy then? The aim is to recover optimism, according to the Australian finance minister, Joe Hockey. How? By growing. There are two possibilities here: to spend more money so as to boost demand or to reform the economic structure by means of deregulation.

The US has a different opinion. The Secretary of the Treasury, Jack Lew, thinks that “Europe must boost demand in the short term, and carry out a structural economic reform in the long term.”

Be that as it may, the background to the debate is the greatest concern surrounding the direction of the global economy. The president of the Bundesbank, Jens Weidmann, said that in the second quarter economic growth in Germany slowed down, adding that there are geopolitical risks as well as imbalances between the emerging countries and the EU.

Germany rejects any further intervention in Europe. Mr Schäuble believes that the structural reforms are decisive, although he doesn’t rule out Brussels’ idea of an investment fund under the control of the European Investment Bank (EIB), who has to prepare a list of potential investments.

Finally, Germany is also worried about Mr Draghi’s depreciation policy, which could lead to a lessening of the pressure to implement reforms in countries such as France. In the last five months, the Euro has lost 10% of its value. The eagerness to weaken the Euro is related to the low inflation in the Eurozone, which is below 0.3% -far from the ECB’s target (2%).

The head of economics at Bank Sal. Oppenheim, Martin Moryson, considers that the ECB is aiming to encourage exports. He points:

“Mr Draghi’s policy only works in the South, especially in France and Italy.” The other side of the coin is the strength of the Dollar: the American economy is growing more than the European one.

Image: Council of The European Union

Be the first to comment on "Germany’s dilemma: Between Europe and the AfD’s europhobia"