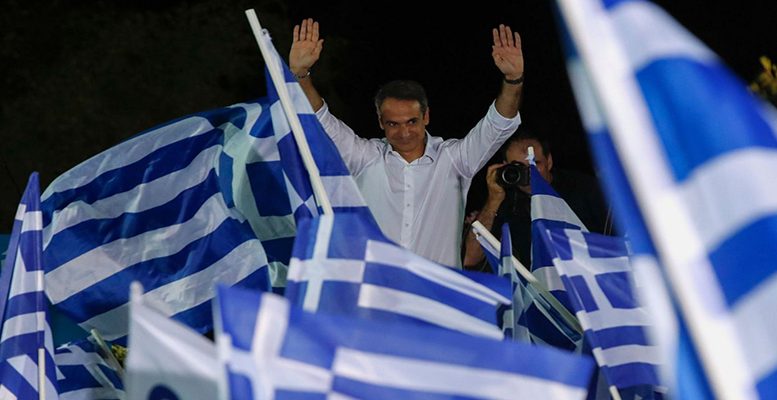 The New Democracy party led by Kyriakos Mitsotakis wins the election with an absolute majority.

Nick Malkoutzis via Macropolis | A narrative evolved in the build up to Greece Sunday’s elections, which has continued in the aftermath of New Democracy’s resounding victory.

It goes a little something like this: The centre-right party broke the mould as it won the contest by not promising anything to voters. The narrative is that ND leader Kyriakos Mitsotakis consciously avoided making any pledges because he wanted to depart from the Greek political tradition of promising pie in the sky and delivering hell on earth.

This fits nicely with another narrative, which is that a political cycle in Greece, which began after the fall of the military junta in 1974 and is known locally as the metapolitefsi, has ended. Greece, it is said, is now ready for a different style of politics, more in keeping with a European boardroom than an Oriental bazaar.

It is true that Mitsotakis took a more low-key approach than many previous party leaders and on most issues (with the Macedonia name deal being a glaring exception) and that his language was more measured than Greek voters had been accustomed to. It is also true that he bucked the trend of offering jobs in the public sector (so long a vehicle for securing votes in Greece), although he did pledge to hire 1,500 police officers immediately and not to fire any of the serving civil servants, but to reduce their numbers through attrition by implementing a 1-for-5 hiring policy.

Mitsotakis also refrained from promising any quick fixes for Greece’s predicament. For instance, there was no Thessaloniki Programme, SYRIZA’s 2014 plan for addressing the crisis, which was estimated at a cost of more than 11 billion euros. Nor was there a desire to hark back to the so-called Zappeio plans put forward by a previous New Democracy leader, Antonis Samaras, which also proved disconnected from reality.

In fact, Mitsotakis appointed as Deputy Finance Minister, with responsibility for government spending, Theodoros Skylakakis, a centrist politician who was ousted from New Democracy in 2010 after he disputed Samaras’s assertion that the Greek budget deficit, which was 11.2 percent of GDP that year, could be eliminated in 2011.

This was a further sign that under Mitsotakis’s leadership, New Democracy is adopting a more grounded approach and is less inclined to make pledges that are preposterous. However, there is a difference between this and the claim that ND did not make any promises in the recent election campaign, leaving voters with no expectations at all.

This is domestic meme that has now been picked up, unchallenged, by some international commentators. But the claim is an insult to people’s intelligence. Has there ever been an election campaign anywhere in the world that didn’t involve pledges being made? After all, that is a key element of politics: Presenting voters with a set of goals and then trying to achieve them if they vote you in.

The way some people are describing Mitsotakis’s campaign is akin to the virgin birth: He appeared and people voted for him.

This approach, though, does no good to the new government and it certainly treats voters dishonestly. New Democracy won the election largely on the back of its ability to piece together a vision for Greece’s future and to stop dwelling on the past. It was rewarded for doing so and this should be recognised so it can serve as an example to others in the future, while also motivating the current administration.

This vision included quite a few pledges on the economic front. It would be childish to ignore them because the ability of the new government to fulfil these pledges is one of the main criteria on which it will be judged over the next four years.

In fact, the government has already said that it plans to submit to Parliament by the end of this month a tax bill, which will contain many of the pledges made by Mitsotakis on the campaign trail. It is estimated that the fiscal impact of this bill, which spreads the cuts out over three years, will be 6 billion euros.

It may not be the Thessaloniki Programme, but that is a hefty fiscal promise given that Greece must still meet primary surplus targets of 3.5 percent of GDP. In the coming months, Mitsotakis aims to convince the creditors to lower these targets. But several European officials, including German Chancellor Angela Merkel, expressed a reluctance this week to do so, so it is not certain that New Democracy will have the space to fulfil its tax pledges.

The conservatives claimed during the campaign that they can find 1.5 billion euros of savings in the public sector, but having heard arguments like this before, the institutions would want to see the cost-cutting in action before taking anything for granted.

The fiscal measures that the new government wants to implement include:

Ah, but Mitsotakis did not make any promises of handouts, like so many of his predecessors, some might say. That’s not accurate either. He pledged, for instance, a 1,000-euro increase in the tax-free threshold for each child born into a household as well as a 2,000-euro lump-sum for new babies. The latter pledge caused a stir recently when New Democracy officials suggested it would only be available to Greek families.

Also, fearing that Alexis Tsipras’s last-minute bid to win votes for SYRIZA by paying out a bonus to pensioners would harm New Democracy, Mitsotakis promised that he would introduce a new “permanent mechanism” to support low-income pensioners.

New Democracy also voted for the scrapping of the planned reduction in the tax-free threshold due next year. Given that it wants to reduce the income tax for anyone earning under 10,000 euros a year to 9 percent as well, the centre-right party is essentially promising anyone who declares less than that amount that they will have tax-free earnings.

Beyond that, Mitsotakis also promised to double Greece’s growth rate from the projected 2 percent to around 4 percent, a level of growth that Greece hasn’t seen in 12 years. He said that the minimum wage, which SYRIZA increased by 11 percent earlier this year, would also be increased at double the growth rate so that it reaches 730 euros (from the current 650) by 2022.

This rapid increase in growth will be achieved via a massive boost in investments, New Democracy says. In the 20-page programme it published just a few days before the elections, the conservatives said they could attract more than 65 billion euros in private investment (over a third of Greek GDP) and that by increasing public investment, it could create 43,000 jobs a year. Another 37,000 jobs are destined for the construction sector, which will be boosted by lower taxes and the strengthening of the golden visa programme, ND said.

New Democracy has said that the start of work on the redevelopment of the former Athens airport at Hellinikon, which the SYRIZA government was not able to get off the ground amid accusations that it undermined the project, will immediately create 50,000 jobs. At the start of the election campaign, Mitsotakis said that the necessary ministerial decisions to launch the project would be signed within a week of ND coming to power.

The more you look at it, the more New Democracy’s programme looks to have the classic elements of a Greek election manifesto: More growth, higher wages, less taxes and tens of thousands of jobs.

There is nothing wrong with this per se. After all, this is exactly what Greece needs after a gruelling decade. It should be aiming for higher growth and more jobs. Trying to hide that this is what ND promised Greek voters is an exercise in either denial or obfuscation.

It should be said, though, that given where Greece is both economically and fiscally, these are ambitious pledges and will test to the full the claim that they were much more grounded in reality than those heard in previous election campaigns.

Whatever people say or write, Greek voters are likely to have a clear idea of what they were promised and what they should judge the government on over the next four years. This has been the story throughout political history. No fleeting narrative is going to change that.