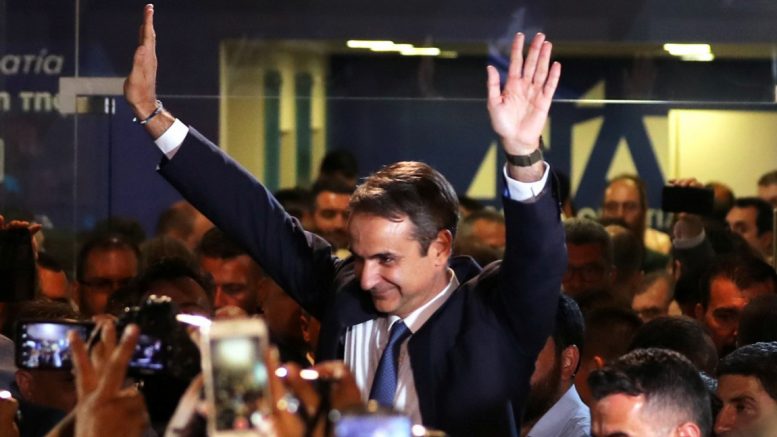 Nick Malkoutzis (Macropolis) | Over recent weeks, there has been much talk from government officials about a “new Greece” emerging after the July elections. This has been supported by legislation that has already been passed, such as interventions in the way the country is governed, and the draft laws that are being lined up, such as the development bill, which is seen by New Democracy as a bureaucracy-buster that will pave the way for more investment.

The centre-right party also points to the focus with which it has removed some of the obstacles to the much-delayed redevelopment at the former Athens airport (Hellinikon) as further evidence that a page has been turned.

To further back up its argument, ND highlights the record low Greek bond yields and the words of encouragement from foreign officials, such as US Trade Secretary Wilbur Ross, who claimed after a recent visit that the current government in Athens “gets it” as far as attracting investment and boosting growth is concerned.

Prime Minister Kyriakos Mitsotakis is building on the platform provided by his party’s election victory in July. Apart from bringing New Democracy to power with a clear majority, the result, which saw a swing of about 1 million votes to and from the two main parties when compared to the last national vote in September 2015, also provided the conservatives with the momentum to pursue policies that might have been considered toxic in previous election contests.

That Mitsotakis campaigned successfully based on pledges of tax cuts for businesses, as well as individuals, less red tape, more privatisations and a gradual reduction of the public sector suggests that this summer there was a greater appetite among Greek voters for the kind of liberal economic policies that were anathema in the past. Of course, ND’s manifesto also contained plenty of measures to enticethe average voter, such as handout for newborn children and improved terms for paying off unpaid taxes and social security contributions. But the election result left the feeling that, after a decade of crisis, Mitsotakis had secured at least the tolerance a sizeable part of the population to try a different economic approach to the pre-crisis years, which were scarred by ever-higher public spending, handouts and erosion of competitiveness.

The apparent desire of many Greeks to look forward after 10 years of crisis has provided Mitsotakis with the political space to make the kind of business-friendly interventions he thinks will attract more investment and get the Greek economy growing at a faster rate than has been predicted so far.

The three areas on which the government is focussing most are: Tax cuts, reducing bureaucracy and improving the use of digital tools.

New Democracy has already passed one tax bill, which included the phased reduction of corporate tax from 28 percent to 24 and then to 20, as well as the lowering of the tax on dividends from 10 to 5 percent. It is due to table another in the coming weeks.

The development bill unveiled by the government recently contains numerous measures aimed at trimming red tape, including a simpler licencing procedure that will involve assessments by private experts, allowing investments classified as “strategic” to by-pass some building and environmental regulations and the increased use of digital maps to help investors identify zoning restrictions. There are also plans to create the Kafkaesque-sounding National Programme for the Simplification of Procedures and the Bureaucracy Observatory. Presumably the latter agency will come under the auspices of the Ministry for Watching Paint Dry.

The government also sees potential for economic gains from implementing a more up-to-date digital policy. Greece currently ranks 26th out of 28th in the EU Digital Economy & Society Index so there is clearly plenty of room for improvement. ND is bringing all of the government’s IT services under one ministry, has plans to create a central portal for government services and is preparing legislation for the roll out of the 5G network in the coming years.

The goal is to create a virtuous cycle involving less tax, more investment, improved exports, higher consumption and increased growth. During the election campaign, Mitsotakos said his aim is to raise the growth rate to 4 percent, around double the increase predicted for the coming years by Greek and European institutions.

It is this pledge above all others that is likely to determine the government’s political success, or lack of. A more rapid rate of growth will provide the jobs and higher wages that Mitsotakis has promised but, even more importantly, it will allow him to argue that voters were right to put their faith in policies that they viewed with scepticism or repulsion in the past.

If the economy does not pick up significantly, some voters might consider their dalliance with Mitsotakis’s more liberal economic approach a disappointment, motivating them to seek alternatives when the next elections come around.

For the time being, the government is riding the wave that followed its win at the ballot box. Bond yields have dropped, tax revenues are up, investors are showing some interest and foreign officials appear encouraged. Naturally, ND is doing all it can to communicate an optimistic message based around the idea of renewal. Establishing the narrative is a key part of the battle.

However, the worst thing the government could do at this stage is to believe its own hype. There are several reasons to be sceptical about whether the new Greek “economic miracle” or “pleasant surprise” will materialise. There are enough significant obstacles for government officials to be aware that the political change in July is not enough on its own to deliver economic success.

The upbeat words are necessary, but we should not confuse image with reality. The business of reforming the Greek state and the economy is not an easy task. Countless times under Greece’s three programmes, laws were passed with the aim of tackling chronic problems but often little changed because of weak implementation. The government would be wrong to think that this was a weakness of previous administrations and does not apply any more. A small example of how this affliction persists is that ND passed a law earlier this summer requiring non-urgent bills to be put to public consultation for at least two weeks. The recent development bill, a considerable body of legislation that is not being pushed through Parliament under the emergency procedure, was available to the public for just a week.

In terms of investment, the government is rightly trying to draw more capital to Greece because this is the only way growth will accelerate. But it must show that it is creating genuine opportunities for foreign direct investment (FDI) and not more prospects for the kind of crony capitalism that has ravaged the Greek economy for decades. The difficulties of attracting foreign investors to Greece were highlighted by the news earlier this month that China’s Fosun and Eagle Hills from Abu Dhabi have dropped out of the Hellinikon project, just as the first funds for the redevelopment have to be invested.

Similarly, there is a difference between attracting long-term investment that will help budding sectors of the economy grow and making some quick wins in well-established areas, such as tourism or construction. There is a concern that much of the development bill is dedicated to removing obstacles to construction and that in combination with reduction in property taxes, ND is hoping that this sector will be able to provide a quick, sharp burst of growth that may help its short-term political ambitions, but not the country’s long-term interests.

These worries were strengthened by the fact that the first version of the bill contained provisions allowing construction to take place right on the coastline. Clearly, Greece’s shores are far from pristine, but the thought of applying the outdated Costa del Sol formula in Greece now provoked a backlash. This is not the kind of development Greece needs, especially as there are serious doubts about the sustainability of such investments, both environmentally and financially. Regarding the latter, Greece enjoyed a construction boom before its crisis but the fundamentals are very different today, not least because its banks, heavily burdened by bad loans, are constrained as to the level of financing they can provide. The government changed the provision in the draft law after all these arguments were put forward by critics.

If there is a suspicion that environmental standards are being compromised, the government can expect to meet resistance from its political opponents and Greek civil society, especially now that SYRIZA senses there is a political opportunity in pursuing a green agenda. Another area of friction is the deregulation of the labour market, which was substantially liberalised during the crisis. This Tuesday, the government faced its first major strike, which was prompted by provisions in the development bill that included allowing financially troubled companies to bypass collective sectoral contracts and sign individual deals with employees. There have also been complaints by opposition parties that ND is skewing its tax cuts towards the well-off.

It appears that most Greek voters are content to allow the government some time to show its capability. A recent opinion poll by MRB for Star TV suggested that 6 in 10 voters are willing to give ND a 6 or 12-month grace period to show that it is fulfilling its pledges. But the conservatives should not expect a free ride from their political opponents or society if they are deemed to be pursuing policies that favour the few.

Above all, though, Mitsotakis and his ministers will have to avoid falling into the trap of getting carried away with their own narrative. They are working from a much sounder base than Greece has had for many years, they are making efforts to take advantage of the momentum and there is encouragement from markets and officials abroad, but boosting Greek growth is a complex task with many pitfalls. It is worth noting that during a recent speech, Bank of Greece governor Yannis Stournaras indicated that if everything falls into place, including a more benign international environment than the current one, a growth rate of 3 percent could be achievable.