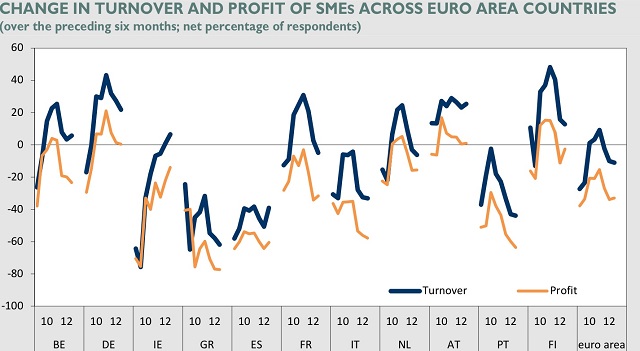 Buried under the data the European Central Bank released Friday, there can be found a just cause for Mediterranean small and medium size companies to tune their self-criticism skills.

Sadly enough, that might be the most positive outcome after reading the latest survey on access to finance in the euro area: while eurozone’s SMEs reported an increase of five percentage points in external financing needs for bank loans during the last six months, one in ten businesses still said conditions have deteriorated and rejection rates remain over 11 percent (although from 15 percent in the previous poll).

That’s awful news for the unemployed population. According to a recent study by the European Commission, it’s precisely the small and medium sized enterprises sector that plays a fundamental role in creating jobs. SMEs accounted for up to 85 percent of net new jobs in the EU between 2002 and 2010. “This figure is considerably higher than the 67 percent-share of SMEs in total employment,” the Commission noted, as “during this period, net employment in the EU’s business economy rose substantially, by an average of 1.1 million new jobs each year. With 1 percent annually, the employment growth for SMEs was higher than for large enterprises with 0.5 percent.”

The lack of credit to small business must really worry Brussels, because its own figures have revealed that new firms (younger than five years) are responsible for an overwhelming majority of these new jobs.

The correlation shows up in the unbalanced picture of the euro economies. In most countries, SMEs saw profits decline once more, whereas Germans and Austrians kept their heads above water. In Germany, there was no variation whatsoever and a mere one percent complained in Austria, in contrast with 77 percent in Greece, 60 percent in Spain, 58 percent in Italy and 64 percent in Portugal.

And here’s the odd fact: over 27 percent of small businesses in Germany and Austria mentioned that the availability of skilled staff and experienced managers was a matter of concern, although apparently it was a non-issue in the stressed countries. Well, they are wrong. Blaming the general depressing state of the eurozone and its neighbours cannot hide that weak lending explains only partially their fall. The euro periphery’s economic performance is poor because business education is also insufficient.