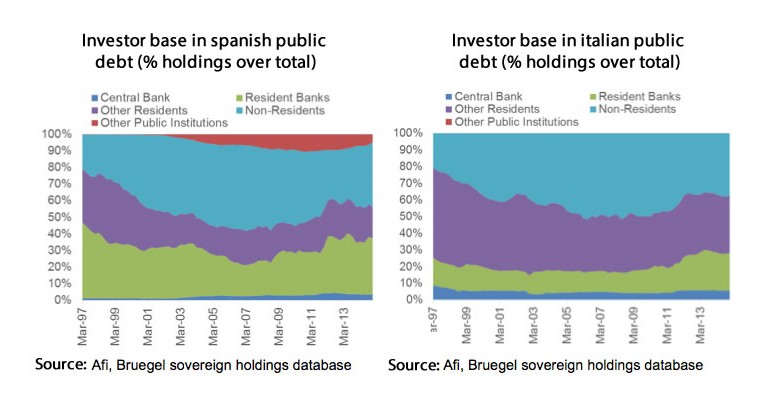 The current uncertain political panorama in Spain after the December 20 elections has not been reflected in any significant way in sovereign debt spreads. The yield on the 10-year bond compared with the German bund is around 130 bp, no more than 10-15 bp above the pre-elections level. Against this backdrop, one alternative to reduce (or diversify) exposure to Spain’s public debt would be take positions in Italian debt.

Afi analysts have looked at this possibility from four angles: macroeconomic performance, the dynamic of the public debt, the stability of the investment base for debt instruments and the risks inherent in the banking systems.

Spain grows at a faster pace

Although both countries have returned to growth since the 2012 recession, Spain is expanding at significantly higher rates than Italy. However, recent indicators point to the fact that Spain is slowing while Italy is maintaining growth rates in line with the last few quarters.

In the long term, the growth differential between the two countries should be reduced, but it will remain favourable for Spain.

Italian debt has a more stable outlook than Spanish debt

The public debt/GDP ratio is quite a bit higher in Italy (130%) than in Spain (100%), as are the interest costs on GDP, although they have decreased to levels of 4.2%. In any event, Italy still has a primary superavit of 1.5%-2% of GDP. Spain still has deficits, although they are getting less.

Referring to the public debt stability gap: that is, the difference between the current level of the primary surplus and that needed to stabilise the debt, Italy is better positioned than Spain. According to Afi analysts:

“Both countries have very high debt/GDP ratios. So in the medium to long term, in addition to a recurrent primary surplus, they need to increase their growth potential to significantly reduce that ratio.”

One key aspect of the peripheral countries’ debt is the stability of the investor base. Afi analysts highlight three points here: Italian debt is mainly held by private, non-bank investors who are residents, and to a lesser degree is in the hands of resident banks.

The Italian’s banking sector’s ailing health
A very important factor, and one which benefits the Spanish market, is its banking system’s current healthy situation. Although all the European banks are suffering from a decline in profitability due to low interest rates, the quality of the Italian banks’ assets – in general – is considerably worse than their Spanish peers.

“The bad bank planned by the Italian government avoids the necessity for a very substantial increase in provisions on the part of the banks. This would be a burden for the Italian banks and would result in heavy dilution to shareholders. There could also be some contagion risk for the sovereign.” The spread between the Spanish and Italian 10-year bonds has decreased in the last few weeks.

The market appears to be penalising the doubts over Italy’s financial system. So while the 10-year bond spread between the two countries rose to 25 bp after Spain’s elections – without reaching the summer highs of around 30 bp – there has been a gradual correction to the current level of around 10 bp. So, Afi’s analysts draw the following conclusion:

“Although diversifying risks makes sense given the current situation, we don’t believe it is justified to make a firm bet on there being any significant variation in the debt spread between the two countries.”