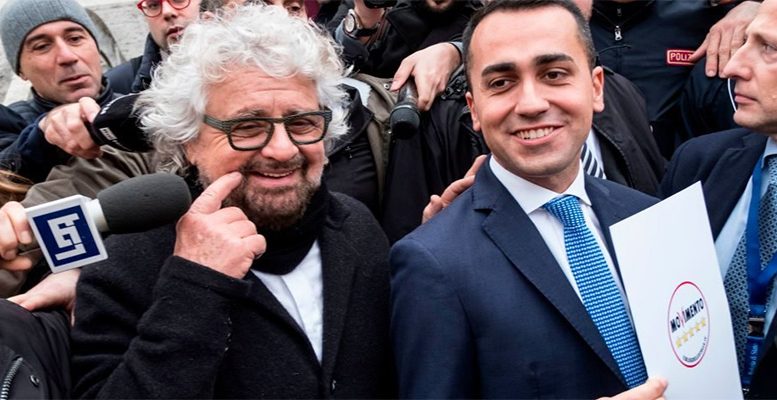 “Markets may well be in for another Italian surprise”. Deutsche Bank AM’s analysts do not make this claim lightly. On their reading of the admittedly ambiguous data, they believe the anti-establishment Five-Star movement may only be a normal polling error away from being able to block the formation of any realistic, broadly centrist, pro-European government.

On March 4th, Italians will elect new members to both the Chamber of Deputies and the Senate – together they make up the Italian parliament. This includes all 630 Deputy seats, as well as 315 out of 321 Senators.  Under the new electoral system, both chambers will be elected through a mix of proportional representation via party lists (for approximately 63% of seats  ) and first-past-the-post , single-member seats (the remaining roughly 37%). The rules still differ slightly.

A this point, experts at Deutsche Bank AM highlight that Italians need to be 25 years or older to vote for the Senate. But overall, that the new system should ensure that both chambers will look very similar in terms of their party composition.

This marks a big change. In the Italian system, the two houses perform identical functions. Previously, this and the at times very different party composition in the two houses contributed to gridlock.

Other tentative signs of progress include how the election is seen by financial-market participants.

After 2016’s market-moving surprises, more and more investors appear inclined to think in terms of probabilities, rather than certainties. As a general trend, the spread of probabilistic thinking is more than welcome. We have previously pointed out that the polling data was pretty ambiguous ahead of the Brexit referendum and the U.S. presidential election

As analysts noted last year, the constitutional referendum of December 2016 was by far that year’s biggest polling disaster (March 2017 European Election Special). The far-reaching changes were rejected by a whopping 18% margin, more than 3 times the unadjusted polling average in the weeks leading up to the vote.

This was an early reminder that some of their favorite forecasting rules of thumb might not apply so well in the Italian context.

In particular, they are thinking of the following three rules:

1. Trust the data, rather than your – or anybody else’s – gut instinct.

2. Don’t read too much into any one poll.

3. Some data is better than no data, and the more data, the better.

“In general, these rules work quite well. And, broadly speaking, the publicly available polls paint a reasonably reassuring picture,” Deutsche Bank AM comment. On fairly unsophisticated quality-adjusted polling averages, the center-right coalition is ahead with about 37% of the vote. The anti-establishment Five-Star movement is at about 28%. The center-left coalition is at 27%; its main member, the ruling Democratic Party, led by former prime-minister Matteo Renzi, is at just over 22%. Among the smaller, unaffiliated parties, the only one likely to clear the 3% hurdle to get into parliament on its own is the left-wing Free and Equal alliance at 6% (itself a spin-off of the Democratic Party).

Under the new electoral system, former prime minister Silvio Berlusconi’s center-right coalition would most probably need a vote share of at least 36% to get close to winning a majority in both houses. How close is impossible to say at this point, numerous forecasting models notwithstanding. Under the new electoral system, small differences in the regional distribution of the vote share could have a big impact, particularly in shifting the balance of power for key marginal first-past-the-post constituencies in southern and central Italy.

Methodologically, the problem is similar to translating national polls into seat forecasts for the British House of Commons and related to getting the Electoral College in a U.S. presidential election right. You would need to know how well the center-right does compared to the next runner-up in each single-member districts, taking into account both last-minute shifts and regional correlations. That is pretty hard, as long experience in both the UK and the U.S. shows.

It is much harder in Italy, however, because there is little directly relevant historic district data, combined with an already very fragmented political landscape. The center-right coalition is composed of four parties: Berlusconi’s Forza Italia (about 16%), its right-wing allies from the Lega Nord (13%) and the far-right Brothers of Italy (5%), as well as the centrist Us with Italy (2%). That makes it even riskier to extrapolate across various regions, than to say what the performance of the Labour Party in England might mean north of the Scottish border. All that can reasonably be said is that the center-right might be able to secure a majority with as little as 36% or 37% of the vote – if, for example, the center-left underperforms in regions it has historically been strong in. Conversely, Berlusconi’s coalition might fail to get a majority with as much as 42% or 43% of the vote, if, for example, Five-Star turns out to perform strongly and consolidates those opposed to the center-right.

Apart from that, the only safe prediction may be that even if you could trust the polling, it would probably take at least three to four additional electoral cycles worth of data before investors should put much confidence into seat forecasts.