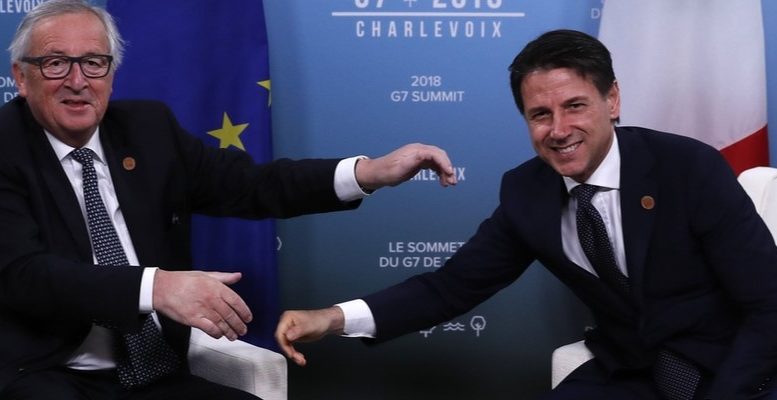 The European Commission could start its ‘excessive deficit procedure’

Rome and Brussels are engaged in a permanent dispute over the 2019 budgets, exacerbated by the lies of the populist Italian coalition. The Commission leaders counterattack with the data in hand.

According to European Commission data, between 2014 and 2020 Italy will receive almost 43 billion euros in European structural and investment funds. The country´s contribution to these projects reaches 30 billion euros, which almost doubles the final total destined for 75 major state and regional programmes which seek more employment and growth, with special emphasis on R&D and environmental protection.

When social, structural, agricultural and rural funds or programmes of youth employment, the nucleus of Brussels´ financial artillery, are allocated, Italy remains divided into three regions based on per capita income. The north, to Rome, belongs to the most developed regions in the EU with a per capita income above or equal to 90% of the Union average. Sardinia and a small zone in the centre of the Adriatic coast have an income between 75% and 90% of the Union average. The southern third of the Italian peninsula plus Sicily remains one the least developed regions, with a per capita income below 75% of the average of the EU 27. Italy is the third economy of the Eurozone and the fourth in the EU, but from this economic fracture in two emerges the amount of EC funds it receives.

Countries like Italy, Spain, Greece, Ireland or Portugal “have received on average between 3-4% of their GDP in annual transferences from the European budget” compared to other economies like Germany, Sweden, Holland or Denmark. “Some countries obviously have made better use of these transferences than others”, replies Klaus Regling, Director General of the Financial Stability Mechanism. “Ireland was one of the poorest countries when it joined the EU, it received the transferences, and is not a net contributor” to the European budget.

The EIB began operations in the 60s within the European Economic Community which emerged from the Treaty of Rome, with the objective of promoting growth and cohesion among European regions. Before a group of journalists in Luxemburg, Werner Hoyer, President of the EIB, explains that “if we look at one of the major member states, where the cohesion was so unequal in those days, I am talking about Italy and the Mezzogiorno, the situation today is still the same”.

After six decades of millionaire injections of European funds, “the division between north and south in terms of wealth, productivity or economic activity is enormous. The work is not finished” Hoyer commented about the work of the bank he presides. A dose of self-criticism which, again, also shows the disgrace of the Italians.
If we return to 21 April 1959 we come to the first loan signed by the EIB. Three of the final beneficiaries of the transaction were Italian companies which were to construct energy and petrochemical plants in the south of the country. The relation with Italy is long and this country has benefited excessively in comparison with other community partners. Between 1959 and 1972, around 60% of the loans delivered by the EIB to Member States were for Italy, according to the Bank´s own data. More than 40% of this money was destined to the infrastructure projects, like the Autostrada del Sole which connects Milan and Naples passing through Rome and Florence, or the financing in 1965 of part of the construction of the motorway in the Brenner Pass in the Alps.

And thus we arrive at the tragedy of Genoa, the criticisms of Matteo Salvini (“If external limitations prevent us from spending on ensuring safe roads and schools, you have to question whether these rules make sense”) which have been shown false by the flow of money that the country had available. Werner Hoye warns that “the collapse of the bridge in Genoa was the first sign that we have a problem. Unfortunately people died and that is something that could happen again in any part of Europe.”

Europe has not complied with one of the recommendations of the OECD, that it should reserve around 50% of investment for the maintenance of an infrastructure project over the length of its life. Hoyer concludes that the state of European infrastructure, from the north to the south of the continent, is shameful. Meanwhile, Brussels, Rome and the remaining capitals are fighting over budgets.