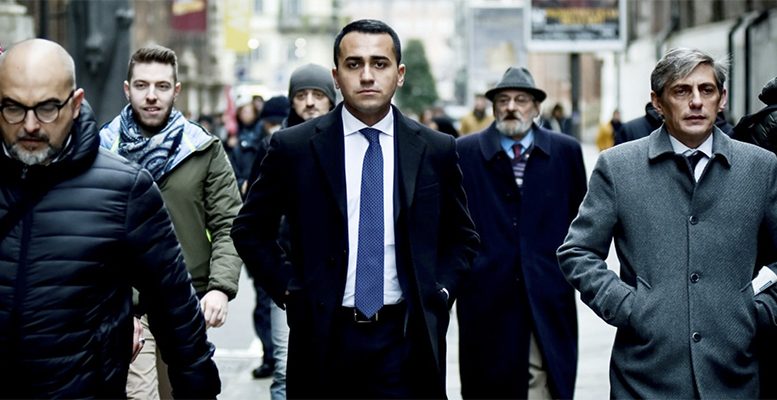 Giacomo Bracci | The result of the latest political elections in Italy has been interpreted by many observers as the outcome of deep, popular discontent. Italian citizens have expressed different unsatisfied needs, ranging from the demand for better and higher employment levels to the defense of economic and geographic borders; however, the request for more protection is a common denominator of the Italian electorate’s demands.

The difficult relationship between Italy and the economic framework of the euro area has played a major role in driving these demands. The fiscal rules euro area countries are subject to – which are not limited to the Maastricht nominal debt and deficit ratios to GDP, but also require member states to achieve a balanced budget in structural terms over a 3-year horizon. Hence member states are prevented from pursuing an expansionary fiscal stance even in the presence of two accommodating factors: firstly, an indirect ECB guarantee is in place on euro area members’ government debt since Mario Draghi’s famous 2012 statement according to which the ECB would have done “whatever it takes” to rescue the euro ; secondly, the ECB’s Quantitative Easing has dramatically lowered member states’ funding cost.

However, the ECB umbrella is still conditioned to the adherence to the fiscal rules established in the Stability and Growth Pact, thereby providing no space for fiscal stimulus. However, as Matthew Klein recently wrote in the Financial Times, the euro area’s fiscal position makes no sense: the overall jobless rate remains at 8.7% – very close to pre-crisis levels – and the distribution of unemployment is extremely skewed. For instance, the euro area unemployment rate excluding Germany is at 11%, which is the same current unemployment rate in Italy. Moreover, as the ECB and the EU Commission have acknowledged in recent papers, official estimates of labour underutilization underestimate the true jobless rate by neglecting all discouraged workers. In fact, the Italian U-6 unemployment rate (the broadest possible measure of unemployment according to the methodology of the Bureau of Labour Statistics) stands at 30% according to the Italian economist Gennaro Zezza.

On the productivity side, Italy does not shine either: labour productivity decreased by 1% between 2015 and 2016, and it has been persistently below the EU average between 1995 and 2016. According to a study by Italian economists Pasquale Tridico and Riccardo Pariboni, the decline in Italian labour productivity began in the mid-1990s. This was the result of a deindustrialization process which shifted a significant share of the working population away from manufacturing into low-paid and precarious jobs in low value-added services sectors such as hotels and accommodations, food industries, restaurants and many others. Moreover, the reduction of workers’ bargaining power and the implementation of structural reforms has been the main pillar of the Italian economic agenda since the diffusion of the 1994 OECD Jobs Study. But it has not delivered the expected results in terms of job creation and it has not allowed for consistent job recovery after the double-dip recession hitting the country in 2008 and 2012.

In this context, the strong discipline imposed by euro area fiscal rules and meticulously followed by Italian governments has not helped the country to fight its long-lasting decline. In 1991, the Italian economists Francesco Giavazzi and Mauro Pagano argued that the European Monetary System – a fixed exchange rate agreement that preceeded the euro – was an unambiguous advantage for member states. It allowed governments to be subject to market discipline, thereby preventing excessively expansionary fiscal policies and constraining inflation biases. The thesis of a “foreign constraint” as an absolute necessity was in fact adopted by the Italian élites. Twenty-six years later, in 2017, the ECB economists Marek Jarociński and Bartosz Maćkowiak have shown that market discipline, in the absence of a euro area safe asset, made the downturn caused by the sovereign debt crisis worse by preventing governments from adopting counter-cyclical fiscal policies.

As the Italian journalist Stefano Feltri writes in his recent book Populismo sovrano, the relationship between Italian and EU institutions is often perceived in the Italian political debate as a clash between a colony and a dominant entity. However, Italy is also part of EU institutions themselves and the sovereignty of its citizens should be expressed in outcomes of European-wide policy making. Hence, the problem is to design an appropriate institutional framework which both prevents moral hazard by countries and allows for more fiscal expansion.

However, there seems to be no political consensus within the EU Council to create a common fiscal backstop capable of absorbing asymmetric shocks: while the Central-Northern bloc opposes any form of risk-sharing before a clear risk-reducing action plan is defined, the Southern countries consider the creation of risk sharing instruments as a priority to prevent future crises. Still, finding a way out of the seemingly unsolvable conflict locking up the two blocs is mandatory, as the future of the common currency itself is at stake.

As a short-term solution, the ECB might be allowed to permanently guarantee member states’ government debt while the EU governments agree on simplifying existing rules and define a more expansionary fiscal stance for the euro area as a whole. Deficit limits might be linked to specific targets such as the harmonized consumer price index, or observable unemployment measures (thereby abandoning the current NAWRU framework); alternatively, the ECB guarantee could be linked to a program of infrastructural investments managed at a European level, as suggested by the European Fiscal Board.

A group of Italian economists also advocates the introduction of a “fiscal currency” that should take the form of tax credits which the public could hand into the government after two years of payment of taxes. It is still unclear whether the fiscal currency would be included in the computation of Maastricht debt by Eurostat: according to the advocates of fiscal currency, this would not be the case as these tax credits do not entitle owners to receive euros on demand.

The recent developments have also revived the possibility once again of an Italexit in the political debate of the entire euro area. The initial controversy between the recent Five Stars-Lega axis and the Italian President Mattarella over the naming of the Eurosceptic economist Paolo Savona as a possible Finance Minister led the whole bloc to reflect on potential consequences of an Italexit. With the appointment of the less radical economist Giovanni Tria as Finance Minister of the new Five Stars-Lega government, the perceived Italexit risk has decreased.

However, the technical debate on how to exit the euro is still lively. A few exit plans for euro area members, such as the paper Leaving the euro: A Practical Guide by Roger Bootle of London’s Capital Economics, have been studied and discussed so far and generally require a quick plan of action to be suddenly implemented. Instead, a recent publication by the Giovanni Siciliano, head of research at the Italian securities market regulator CONSOB, suggests caution and careful planning. In the book Vivere e morire di euro (‘Living and dying by the euro’), Siciliano argues that a clear and well-designed negotiation with bond investors can ensure that no foreign bondholder loses in real terms, even faced with the depreciation of the new currency, provided that a changeover period is thoroughly studied.

For various (and often different) reasons, Bootle, Siciliano and other economists who have studied the exit process do not believe that any change in the institutional structure of the euro area is possible. Meanwhile, other euro critics – but not Eurosceptic – push for a bold reform of the euro area and believe that Italy might be the leading country in this process.

In fact, the “contract” signed by Five Stars and Lega includes expensive measures such as the introduction of a quasi-flat tax (which is actually a two-tier tax rate system), a minimum income guarantee linked to active labour market policies and a reversal of the pension reform developed by former Minister of Labor Elsa Fornero. This extended the official retirement age and reduced overall public expenditure on pensions.

Hence, the new government is likely to ask for a renegotiation of fiscal rules in order to fulfil the promises delivered in the “contract”. If a political consensus on more fiscal expansion is not achieved, the Five Stars-Lega government might choose to revive an Italexit plan as a bargaining option aimed at achieving more fiscal space; alternatively, it will have to back down on its ambitious agenda.