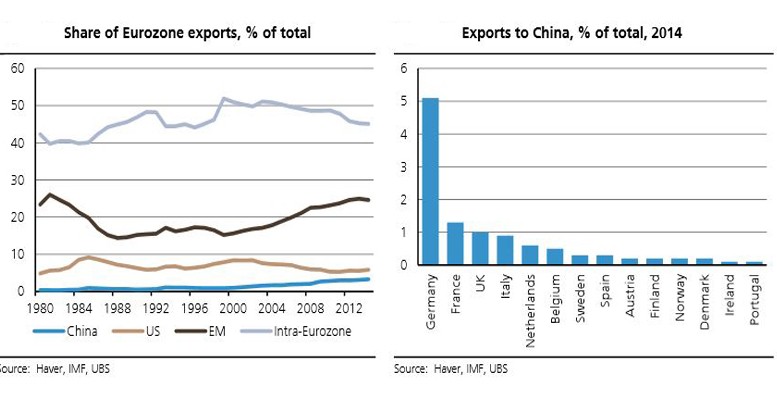 Although Eurozone GDP is expected to grow over the coming quarters, the business cycle is still subject to substantial downside risks.

Over the last couple of months, Greece has appeared to pose the biggest threat to Eurozone recovery. However, UBS analysts think that with a third bailout finally under way, this issue seems less pressing right now.

That said, it cannot be taken for granted the Greek programme will run smoothly from here. Even in the likely event of a substantial reduction in Greece’s sovereign debt over the coming months, a derailing of the programme could trigger new Grexit fears, weighing on sentiment and economic performance.

For UBS, this risk should be taken seriously, “although it might not materialise in the very short term.”

UBS’ base-case scenario (even after the recent volatility in Chinese equity markets) implies a manageable deceleration in GDP growth from 7.4% last year to 6.8% in 2015 and 6.5% in 2016.

In that context, China’s role as a source of global growth is clearly diminishing, but UBS experts do not expect China to trigger major disruptions in Europe.

If China slows down more severely than they anticipate, they say it is important to ask the question”what sort of slowdown?”

But a much more damaging type of Chinese slowdown would be a collapse in (durable) consumption, which would probably hit European car producers hard. This would potentially be a big challenge above all for Germany, which has by far the highest export exposure to China in Europe (5.1%). Consecutive spillovers from Germany to the rest of Europe would then seem likely.

According to UBS, the Fed’s schedule for monetary policy normalisation starting in September could prove challenging for at least two reasons.

Firstly, to the extent that Fed rate hikes would lead to higher US bond yields, Bund yields and other European yields would also rise, although most likely by less than Treasuries. However, higher yields would constitute an unwelcome tightening in monetary conditions within the eurozone.

Secondly, and more disruptive, would be Fed-induced turbulence in the EM block, which is an important trading partner for Europe. Should another “Fed tantrum” be triggered, and take a more substantial economic toll on the EM world, this would have indirect growth implications for Europe. The current turbulence in EMFX clearly underlines the relevance of this risk.