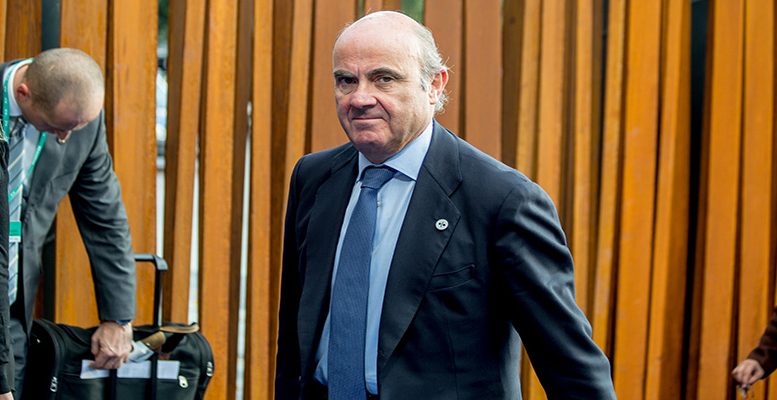 The Spanish government has this week officially announced the candidacy of Economy Minister Luis de Guindos for the Vice-Presidency of the ECB, substituting the Portuguese Vitor Constancio, whose mandate ends May 31. De Guindos’ will be competing with the governor of the Bank of Ireland, Philip Lane. On February 20, the Eurogroup will choose a candidate and later there will be non-binding consultations with the European Parliament and the ECB. Finally, the European Council on 22/23 March will take a decision on the matter.

Luis de Guindos’ nomination has not surprised anyone, neither in Spain nor in Brussels. It was an open secret. In fact, the Economy Minister already tried to move to Brussels as a substitute for Dijsselbloem at the head of the Eurogroup. But the bet didn’t turn out well. There was no unanimity, despite the fact Spain was confident that the public and explicit support from Germany, with chancellor Angela Merkel at the head, would draw in other European partners. The result was never made public, but it was to back the re-election of Jeroen Dijsselbloem.

Second time around, things are not looking particularly good for De Guindos. The opposition parties (PSOE, Ciudadanos, Unidos Podemos) will always consider him as being the one responsable for the toughest cuts in Spain’s history, austerity, the banking bail-out.  Unidos Podemos representative Alberto Garzón has been more explicit, calling the appointment “a macabre joke”. Whatsmore, the minister’s past as director of an office of Lehman Brothers, whose collapse sparked the crisis “doesn’t help.” This “stain” on his curriculum vitae is also one of the key reasons behind Brussels’ criticism of his nomination. But his candidacy is raising hackles in Europe mainly because the post should be an independent one and he would be the first minister to be given an executive post on the ECB. The central bank’s president himself, Mario Draghi, has said this could undermine the independence which, according to the treaties, the institution should have.

A group of economists, including Thomas Piketty recently published a collective article where they denounced the replacement process for Vítor Constancio as not being completely democratic, precisely for that same reason: it diminishes the EU’s treaties.

Luis de Guindos would increase his current remuneration of 73.650 euros a year as Minister of Economy, Industry and Competitiveness by almost five times if he is finally chosen as ECB vice-president. Vítor Constancio received a basic gross annual salary of 334.080 euros in 2016 for this job.