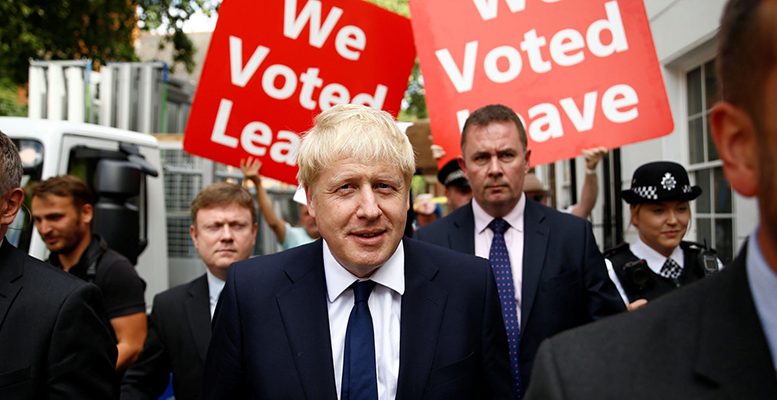 Shaun Riordan | Prime Minister, You enter office in the middle of the UK´s greatest peacetime crisis. Your optimism and can-do spirit are admirable. You will need to be decisive. But your actions need to be based on reality not fantasy, especially in relation to Foreign policy, on which this Memorandum focuses.

2. Brexit is now politically necessary in the UK. But secure an agreed Brexit. England may survive a no deal Brexit (although the Union may not), but your entire premiership will be used up struggling with the fall out. It will not look good in the history books. The EU may not make concessions on the Withdrawal Agreement, but focus on a detailed and constructive Political Declaration that renders the N Ireland back-stop irrelevant. The hard-line Brexiteers in your cabinet now have nowhere else to go.

3. Do not trust President Trump. He may speak well of you now, but he will turn on you as soon as you disagree with him, as you will have to if you want to defend UK interests. On key issues, climate change, Iran and global trade, the Trump administration is a significant threat to those interests. You cannot rely on the US to solve the UK´s post Brexit problems. What is left of the special relationship will be preserved through security and intelligence collaboration, whose depth Trump does not understand

4. Deal with Europe as it is, not the picture book monster of the referendum campaign. The EU is permanently divided between a Eurozone core and a non-Euro periphery. The former is focused on the Euro´s survival, while the latter feels abandoned and resentful. You should be supportive of the Eurozone, but engage with the periphery, especially in terms of security and its preoccupations with Russia.

5. NATO in its traditional form is dysfunctional. Between Trump and Erdogan, it would be unable to react effectively to any new crisis. Strip out its semi-imperial ambitions and reconfigure it as a European security and defence framework (incorporating EU and non-EU European states). The French, desperate to maintain military cooperation with the UK, and knowing they cannot depend on the Germans, will support you. So will the Eastern and Northern European states.

6. Extract the UK from the confrontation with Iran your predecessor drifted into. We do not have the naval resources to prevail, and cannot rely on US support as long as Trump does not share his advisors´ enthusiasm for war with Iran. We will never be friends with the current Iranian regime (Mossadeq), but are better served sticking closer to the Europeans than the US.

7. More broadly, extract the UK from its residual presences in Iraq, Syria and Afghanistan. We have no skin in those games, and we need the forces elsewhere.

8. As soon as Merkel leaves the scene, France and Germany will be competing to be Russia´s European friend. A deal will be sown up over Crimea and Ukraine. We should avoid being isolated, but should stay close to our Northern and Eastern European friends.

9. The UK, as a middle ranking power, cannot afford bad relations with both China and Russia. Hong Kong is a problem. European cover would have been nice, but we gave that up. A previous Conservative Prime Minister, Margaret Thatcher, sacrificed Hong Kong to the UK´s broader strategic interests. You may have to do the same. China will be an essential partner in maintaining or constructing 21st world order, in cyberspace as well as physical space. Being the first to acknowledge the extent of that role will secure influence over how it plays out.

10. Increase defence spending. It is an unavoidable corollary of Brexit, and wanting to operate independently of the EU. The UK´s soft power will take a battering post-Brexit. Its hard power needs to be strengthened to maintain influence. But you also expand the Foreign Office, which has been hollowed out to the point of no longer being fit for purpose. It is not just for trade promotion. A post-Brexit UK needs political influence as well.

11. The UK may have global ambitions, although these should not be driven by distorted images of empire. But no British government can ignore geography. The UK is a European power. Historically, British governments which have tried to ignore Europe have ended up at war there. Europe is going to undergo radical changes in the next few years, which are unlikely to end up in the Federal super-state that featured so heavily in the Brexit campaign. The UK must be engaged constructively in those changes, shaping the outcome in ways favourable to UK interests. If not, the global ambitions will be for naught.