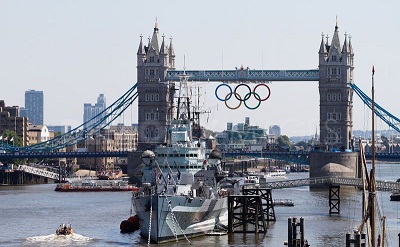 LONDON | While the Earth begins to follow the 2012 Olympics' throb, as the Welsh authorities put it Tuesday morning, research to determine whose massive opportunity it is has kick-started. But the scope of the latest studies seems more restricted: instead of holding expectations of a general recovery for the UK's economy, think of particular sectors of the hospitality industry. And think London.

According to data collected by Santander UK, London hotels will charge premiums of up to 300 percent during the summer sporting events. Hotels in central London will on average bill customers £2,891 or 139 percent more over the Games, and those located near the Olympic Park will more than double that price rise.

“The research is based on a family of four and compares the cost of a seven-night stay commencing on the July 27, 2012 (the opening ceremony) with the cost of an ordinary week in late August, when the events have finished,” Santander researchers explained. “Results highlighted extremely steep hotel premiums.”

Admittedly, the Santander report may feel too local. Yet, at ratings agency Moody's analysts also agreed that the Olympics economic impact will be very limited. The British government spending in the organisation of the Games has reached £9.3 billion, betting on the ominous cloud of the double-dip recession being pushed away from the country. Moody's recently concluded otherwise [our emphasis].

he 2012 Summer Olympic and Paralympic Games are expected to provide a huge marketing opportunity for corporates, the benefits are likely to be largely short-lived, providing only a temporary fillip to corporate earnings,” said Moody's investors service.

“The Olympics are unlikely to provide a substantial boost to the UK economy and believe that the impact of infrastructure developments on UK GDP has probably already been felt,” commented Richard Morawetz, a senior credit officer in Moody's Corporate Finance Group. “We expect the net impact of the Olympics on UK tourism will be positive overall, but far less than gross visitor numbers would suggest.”

Not all views sound so grim, though. Something might be moving on the background of the world's biggest sports competition. For instance, Barclays Stockbrokers said this week that its clients showed a growing appetite for investing in the UK at a time all eyes are focused on its capital.

Barclays Stockbrokers polled over 1,000 clients on their appetite for investing in UK stocks and found 31% of respondents are planning to increase their exposure to investments in the UK.

“Over half (55%) are currently monitoring investment opportunities in the UK, while just 6% are looking to reduce their investments in the UK.”

In a separate poll, Barclays Stockbrokers asked clients which UK sector they favour for investments. Oil and gas received the most votes (26%), followed by the technology sector at 16%, financials and the mining sector, with 13% and 12% respectively.

There might be more to the Games than meets the eye, but Whitehall will need to wait to get the hard facts to back its euphoria.