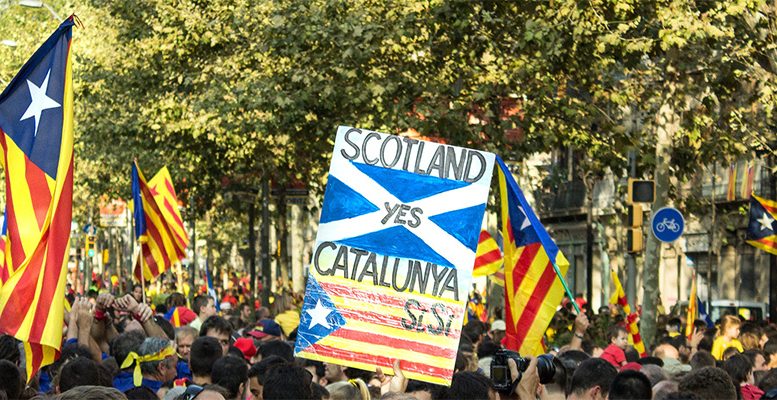 Alfons López Tena | In 2007, the Scottish National Party launched a proposal of holding a referendum over Scotland’s independence. In 2009, some activists detached from mainstream Catalan parties launched the same proposal in Catalonia and actually held unofficial referenda that drove more than a million people to the polls voting overwhelmingly for independence.

Since then, both nations’ paths have diverged.

In Scotland, holding a binding referendum, not a mere advisory one, was deemed outside the legislative powers of the Scottish Parliament, so the Scottish government agreed with the British government the terms of reference of the 2014 independence referendum. In due form, both Houses of Parliament approved a temporary transfer of legal authority from Westminster to Holyrood to call it, and the British government stated that, if independence was won, “Scotland would become an independent country after a process of negotiations.” This would have been an irreversible and binding outcome that would have led, after the conclusion of talks, to the UK Parliament legislating for Scottish independence to take place, following the well-trodden path of previous umpteen Westminster-accepted independences from the former empire.

Catalonia’s path has been a bumpier ride. When the mainstream Catalan parties — attached to independence as a dream to be attained somewhere over the rainbow and not a real issue to be addressed in the real world — began to feel the heat of new parties affecting a waxing number of their voters who were increasingly tempted to search for political alternatives, they tried to extract some moneyed concessions from Spain to put food on the Catalan table but failed. So, they took back control, releasing steam through government-organized nongovernmental organizations to make people believe they had embraced independence as a real aim, not merely as a dream, and sought to remain in power by riding on the back of a grassroots, pro-independence tiger, only to be reduced into a tamed pet with his teeth and claws torn off.

Thus these parties dusted off the centuries-old Catalan threat to opt for independence unless they got a better deal from Spain — a crude blackmail for concessions where independence is not a real aim but a mere instrument of extortion. A successful bluff needs the opponent to fold, but an unimpressed Spain didn’t call it and won the hand, just saying no and applying the laws by the judiciary.

This chicken game reached a climax in November 2014: The Catalan parties backtracked from upholding the referendum they had promised once it was forbidden by the constitutional court, and instead they organized a so-called “participative process.” The Catalans blinked while the Spaniards stood firm. This last straw broke any credibility that Catalonia ever had in Spain and abroad.

Just two months prior, voters in Scotland had flocked to the polls and rejected independence by a 10-point margin.

Back then, a lot of people thought it was the end of the independence game for both countries. This was an exercise of wishful thinking, conveniently forgetting that if most people, rightly or wrongly, feel mistreated and left behind by a callous state which is not their own, independence yearning will come to the surface every now and then until it is achieved or the aggrieved feeling subdues into oblivion.

Until now, the main difference between both nations has dwelt in Westminster’s easy-going willingness to allow Scotland to hold a referendum and Madrid’s stubborn refusal to Catalonia having it, but there are hints it may not be so nowadays.

“Now is not the time” for a second referendum on Scottish independence has been the sharp reply of British Prime Minister Theresa May, meaning it will never be. Going down in history as the prime minister that presided over both the breakup of Britain with the European Union and the breakup of the United Kingdom was a risk that the sleepwalking David Cameron frivolously took, but it’s unlikely that Westminster will incur such a situation again. Therefore, expect a “no” answer endlessly masqueraded under a polite grievance-avoiding “not yet.”

This rejection is grounded in what Catalonia has experienced these past five years: It’s enough for a central government to thwart any move toward an unwanted independence referendum by just saying no.

Since both parties stated in October 2012 when the Edinburgh Agreement was reached that Scotland does not have the legal power to hold a referendum, without the UK Parliament legislation it becomes a non-starter as the ludicrous Catalan experience has showed. In Catalonia, the same parties that promised “referendum yes or yes” from 2012 to 2014 now promise “referendum or referendum.” They backtracked then and they will backtrack again. We will see a rehearsal of 2014’s farce now turned into slapstick.

Reality is even more stubborn than the Spanish government. Nobody gives a damn about how wicked it has been in denying Catalans their independence referendum — denied also by Germany and Italy’s constitutional courts to Bavaria and Venice these past months. Everybody cheers when an official is indicted and condemned for contempt of court when failing to abide by a judicial verdict that forbids a non-agreed referendum, as the Council of Europe advisory committee has stated and encouraged judges to do.

Some people may think there is a possibility that Scotland could organize its own referendum if the UK government refuses to legislate, but the Catalan 2014 “participative process” clearly shows its limits: a referendum could not be organized by the Scottish government; neither officials nor public money could be used; only volunteers would be able to run it; fundraising money would have to pay for it; lack of public guarantees would cast a shadow over its integrity; unionists would boycott it; and any hint of public involvement would lead to the indictment of the officials who exercise an illegal authority.

Even if all these hindrances are overcome and its credibility is not altogether destroyed by the absence of the government’s role in reliably counting votes and preventing voting fraud, neither political nor legal mandate would result from it, as Catalonia’s unofficial referenda in 2009-10 and 2014 have showed, since neither the unionists nor the central government would ever accept the result as legally binding. This kind of shortcut to circumvent the lack of legal power to run an official referendum can yield a lot of superb results, but actual independence is not one of them.

An inconvenient truth must now be recalled: A referendum or a decision by parliament is not an end by itself. They are merely the accepted democratic means to achieve the end of creating a new independent state that has sovereignty over a permanent population in a definite territory, exercising supremacy and the monopoly of public authority and of the legitimate use of physical force — the Weberian das Monopol legitimen physischen Zwanges: the only source of legitimacy for all physical coercion or adjudication of coercion.

No state is willing to relinquish territory to another would-be state; hence there are two ways to substitute the former state by the new one. First, the actual state allows a country to decide by itself over its own independence — running a binding referendum or parliamentary vote, abiding by it and gently retiring if losing. Second, the new would-be state takes power off the actual state, grabbing it against its will in a full-blown confrontation stemming from the harsh statement by Professor Zoran Oklopcic about Catalonia: “[T]he evidence of the legitimacy of your project, and the guarantee of its success, lies not in the performance of the dignity of your aspiration, or in the simulation of your sovereignty, but in the ultimate sacrifice of yourself, and others.”

In this last case, there would be an interim situation of two states — the existing one and the newly proclaimed — both willing to impose their mutually exclusive monopoly of public authority and of the legitimate use of physical force over the same population into the same territory. The International Court of Justice noted in 2010: “During the eighteenth, nineteenth and early twentieth centuries, there were numerous instances of declarations of independence, often strenuously opposed by the State from which independence was being declared. Sometimes a declaration resulted in the creation of a new State, at others it did not.”

It all depends then on the so-called principle of effectiveness, otherwise known as “might is right.” In other words, the facts on the ground — often but not always stemming from the boots on the ground — will decide which of the competing states prevails and wins.

The only non-violent way to achieve independence is thus with the agreement of the actual state, applying internal and international pressure strong enough to force it to yield and allow a legally-binding referendum organized by public authorities. That being said, it is very easy to block everything by simply saying no, as the last eight unsuccessful Catalan years have showed.

If the Scottish and Catalan people are serious about their independence craving, if they really want it and are willing to pay the price instead of merely wishing a cherished dream, then this may be their “once in a generation” last chance. Freedom is not free, but dependence isn’t either. A resigned acceptance of the status quo to avoid the risks and uncertainties that independence, agreed or not, holds can only be overcome by a stubborn willpower, since withdrawal comes at a price.

It could be even worse, as the late French Prime Minister Michel Rocard said to a former Catalan vice president in 2015: “Are you Catalans still making those so beautiful rallies on the street? And politics, when?” The Catalan people’s craving for independence has stalled in a swamp barely able to assuage their fears and moral virtues and warmly sharing the wound-licking communitarian therapy sessions delivering nothing but an upsetting, irksome, extremely boring and acrimonious, chronic, topsy-turvy parade of cranky Catalans and annoyed Spaniards — the latter unwilling to let Catalans go and the former unwilling to go by themselves.

The Scottish people do not deserve this awful Catalan outcome. It is up to them to avoid this, playing politics instead. Perhaps they will not achieve independence, but at the very least they will not fritter away their dignity and pride.