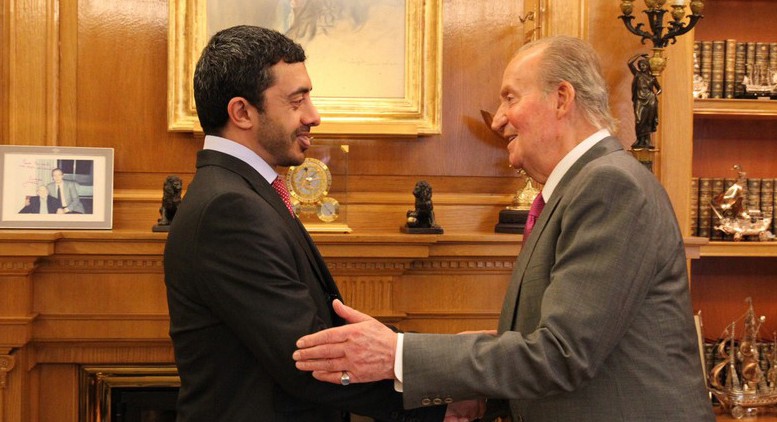 King of Spain Juan Carlos finishes on Wednesday a three day trip to Abu Dhabi and Kuwait with the aim of raising funds for Spanish companies and sell the idea that crisis is over in this corner of the world.

Minister of Foreign Affairs José Manuel García- Margallo as well as Defence’s Pedro Morenés, Development’s Ana Pastor and Industry’s José Manuel Soria travelled with the monarch, along with 15 businessmen, CEOs and senior executive of big national corporations bidding for contracts in the United Arab Emirates.  Among them, ACS’s and FCC’s heads Florentino Pérez and Esther Koplowitz.

The Spanish expedition already reaped some first fruit on Monday with a joint deal for the public engineering firm Ineco and the leading airport operator Aena to build the international airport of Abu Dhabi.

For Spanish companies, the EAU is a gold mine.  The country’s sovereign wealth fund IPIC owns 100% of energy group Cepsa since year 2011. The project to deploy railway tracks to join the Gulf’s nations is on the horizon of of Spanish engineers’ expertise. Furthemore, a Spanish led-consortium aims to participate in Abu Dhabi’s underground construction, which is to move €8 bn. Public works for the Universal Exposition of Dubai in 2020 amounting €20bn are also like candy.

Finally, a hospital, a waste products factory or a water and energy plants are targets for Spain’s corporate sector too, not only for big names but also for SMEs which provide subsidiary services to those during the projects’ undertaking.

The presence of King Juan Carlos in this sort of Spanish road show could have been controversial. In fact, his longstanding and smooth relationship with Arab royal houses, especially with Saudi Arabia’s monarchs, always aroused rumours about eventual private business deals as well as criticism on the appropriateness of the King having and managing a personal fortune.

The courtesy of exceptionally greeting the Emir of Qatar and his second wife at Madrid’s airport during their last visit to Spain in 2011, or granting Saudi King Abdullah with the Collar of Order the Golden Fleece Order in 2007, the major award Juan Carlos can give someone on a personal basis, represented unequivocal signs of a close friendship with sheiks of petrodollars. Nevertheless, this three days visit to Arab peninsula has been blessed by almost all the Spanish media, no matter their political sign.

The King’s hunting of elephants in Bostwana, and mainly tax fraud and money laundering accusations against his younger daughter’s husband Iñaki Urdangarín- have profoundly damaged the image of the Spanish Royal House, a longtime considered the symbol of the democratic transition and stability. Spaniards disaffection with monarchy sank to its record low in 2013.

Surveys say that only 41.3% support Juan Carlos’s reign, while 62% would demand him to abdicate, which means 17 percentage points more than previous year. The institution lost support by 5 p.p. to 49.9%. Considering these facts and figures, Spanish media seemingly decided to unite around the Spanish king by saving his role as best ambassador of Spain’s Brand. Just a few have made reference to the luxuries and the glamorous acquaintances the monarch is to enjoy during his business trip.

The King of Spain’s visit to Abu Dhabi has also a secondary goal: to deal with the lawsuit filed against Spain before the World Bank by the Emirate owned-state company Masdar. The complaint is about the cut of subsidies on the renewable sector, namely over solar thermal power plants. Masdar holds a partnership with Spanish company Sener based on the city of Seville.

Be the first to comment on "Are Spanish media betting on King Juan Carlos again?"