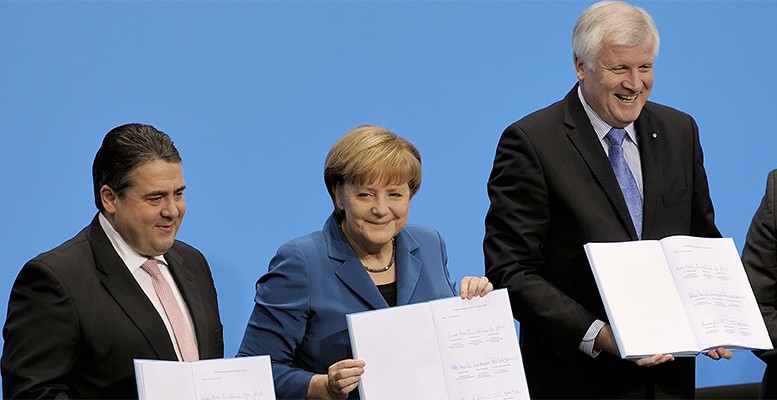 Germany has a very broad history in government coalitions. So is there anything in its formula that makes it exportable to other parts of the world, including Spain? Whatever happens in Germany in the coming months, there are a couple of points worth taking into account.

Germany has a very broad history in government coalitions. Careful, “very broad” only means “abundant”. Its first democratic experience, under the Weimar Constitution, spliced multi-party coalitions, one to another, which were not at the level required by the domestic political enthusiasm and did not have any break from the foolish aspirations of some victorious countries. We know how it ended: Ephemeral heads of government directly appointed by the Chancellor Hindenburg from 1930, until the position finally went to the head of the NSDAP and democracy disappeared for twelve long years.

During the second post-war period, coalitions have been the normal way to ensure a parliamentary majority and form a government. The liberals from FDP or sometimes the Greens were the minority party which participated in governments of the Christian Democracy or Social Democracy. As a whole, the coalitions were rigorously faithful to the German democratisation process. They preserved the responsible functioning of public institutions and facilitated the consolidation of Europe’s strongest economy.

Out of so many coalitions, the “Grosse Koalition” should be highlighted, a grand coalition between the two largest parties, the conservative party and the social democrat party. These two parties are attracted not by any particular sympathy but because the sum of seats would mean no delay in establishing the country’s governance. The first GK was formed because of the failure of the coalition between CDU and FDP after several years of government. Before the policy difference that liberals considered as “red line” (raising taxes), FDP withdrew its ministers and Kurt Kiesinger’s CDU formed a government with Brandt’s SPD (1966-1969). Merkel’s first government (2005-09) and the third (current) were formed from the beginning between the two main parties.

Is there anything in this formula that makes it exportable to other parts of the world, including Spain? Naturally, the answers are free, but if we consider that the goal often -and certainly in Spain at the moment –  is to form a government with full capacity to deal with pressing issues of state, it can be interesting to take some critical notes from Germany’s experience in coalitions, especially of the GK.

The arithmetic of the current GK is simple. In the 2013 elections, CDU/CSU jointly won 311 seats, while the SPD won 193. The Greens got 63 and the former communists, Die Linke, won 64 seats. The Bundestag has 630 seats. As she lacked some seats, Chancellor Merkel out of necessity had to form a coalition. Any other party was enough for a majority, but she excluded the two minor parties. SPD was the alternative partner, with recent experience in the 2005-2009 coalition. The centre-left would not have reached a majority only with its former partner, the Greens, and the political sentiment in the country excluded an agreement with Die Linke.

Once both parties had agreed, the negotiations, the hardest part, began.  German politicians have learned a lot from their “very broad history” and their coalitions are not the result of improvised agreements.

CDU/CSU and SPD formed a committee (Koalitionsausschuss) to collect all government specific issues that they would want to raise. Their aim was to study them thoroughly from all the respective angles and include them in the basic document of government. It is worth stopping briefly in this -key- part of the GK’s constitutions process. The Social Democrats brought a set of social measures to the government that were largely accepted by CDU/CSU, not because they had similar views, but to make the process viable and speed up the formation of a government.

For example, the minimum wage is a measure which German businesses have always opposed. So its inclusion in the agreement of government caused considerable anger within the ranks of the CDU/CSU. But for its part, SPD accepted the rigorous fiscal principles that Minister Schäuble embodied, although it meant stringent cuts in its ambitious infrastructure investment projects.

In short, it is about establishing from the start some very clear principles of governance and specific projects that each one would drive and execute for their own voters, once the distribution of ministerial portfolios was agreed on at the end of the process. Later, in the functioning of the GK, each specific proposal will be discussed and outlined in the Council of Ministers. And although it is easy to identify the role of each party, it is clear that the two coalition members assume full responsibility.

Moreover, there are a number of “priority measures” that both parties deal with together from the start, agreeing the total available budget of € 21 bn: for example, contributing to the funding of kindergartens and schools by the federal states and municipalities (€ 6 bn) or for investments in public infrastructure (€ 5 bn).

These commitments are written down of course, but also immediately made public since Chancellor Brandt publicly announced, for the first time, the details of the SDP-FDP government’s agreement (1969). These agreements are described as a “coalition contract” (Koalitionsvertrag). This is not because their terms are enforceable or claimable in law. It is so voters are offered the greatest possible transparency about each party’s commitments, as well as their promise to respect the government’s program that the other party develops.

There are few improvisations in Germany: these “contracts” are not examples of mere political advertising. The current one is longer than 150 pages, and the committee took more than 30 days to complete it. Each party approved it separately. CDU/CSU did it through its internal bodies, but the SPD president chose the riskiest move: to submit it (successfully) to a referendum of party members. Once the necessary agreements were reached, the Bundestag approved the GK as Germany’s government on December 17th 2013. The elections had taken place on September 22nd. In the “contract” in force, there is a page worth mentioning, entitled “Method of coalition’s work”. It is the summary of obligations that the coalition parties publicly agree to fulfil. At the same time -something of great transcendence- it allows us to see that the two sides approach government together, with the necessary good faith not only to accept each other’s political goals, but to make achieving them also part of their job. This page includes issues such as the duration of the agreement and the commitment to execute it by mutual agreement. There is even the commitment to strengthening the capacity of minority interests in their democratic role of government control (the coalition of two main parties leaves the parliamentary opposition reduced almost to a symbolic voice).

But…coalitions between disparate parties, and perhaps also between less disparate parties, will always be exposed to some risks which are not expected by the “contract”. This is precisely the problem in Europe with the refugee crisis, which endangers the GK in Germany and makes the Chancellor’s position shaky. It is interesting to note that these shocks are not due to internal discrepancies between the two big parties, but to internal disagreements within the CDU/CSU because of the Bavarian government’s negative attitude towards Merkel’s openness.

To negotiate the programme

Whatever happens in Germany in the coming months, there are a couple of points worth taking into account. Even if traditional enmity still exists, political positions can be united without any demerit when the country needs government and the electorate does not provide an easy formula for an outright majority. No-one can fully develop their programme, but part of it. The current German example is very interesting: SPD negotiated a strong social programme compatible with the stabilizing financial vision of CDU/CSU.

And of course, a German-style “contract” would not be immune to Rumsfeld’s “unknown unknowns” as has happened in Germany with the refugees. For these problems, leaders must be willing to use good political sense. There can certainly be an agreed solution to any problem.