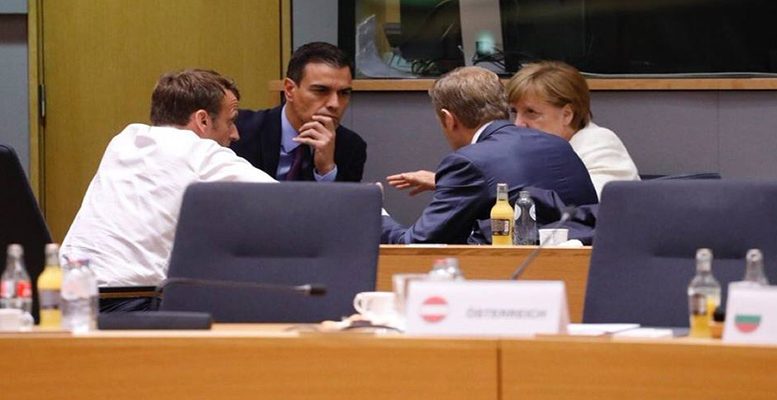 Ana Fuentes | The musical chairs for top institutional renewal in Brussels has begun. At stake are the presidencies of the European Commission, the European Council, the European Parliament and the European Central Bank, as well as the representative of the diplomacy of the Union. But for the moment, and it’s been almost  a month since the elections, there is no agreement. At the marathon meeting on Thursday, no agreement between socialists, popular and liberals was forged. The decision has been postponed to June 30. And on July 2 the new European Parliament opens.

There is little time left but the positions of the ‘European core’ remain far apart: neither the German Manfred Weber (PPE), nor the socialist Dutchman Frans Timmermans nor the Commissioner of Competition, the Danish Margrethe Vestager, won the support of the first European Council. The German government is still pushing for Weber. And this clashes head-on with both the German Social Democrats and Paris. Emmanuel Macron and Angela Merkel themselves point out in public that none of the spitzenkandidaten seems suitable. It opens the way to third names outside of this election system in force since 2014.

How the play of forces between political families will be balanced is important, as are counterweights between countries. It is already known that in Europe, in addition to taking coalitions into account, the national interests are also at stake.

For Spain, opportunities may open up. Not in vain the government has publicized the photo of the acting prime minister Pedro Sanchez meeting late with Merkel, Tusk and Macron. Some commentators point out on social media that “Spain is back”. Spain, along with France, demands that after 15 years of EPP domination there be a change of party in the presidency of the Commission, but the numbers do add up. Sanchez, an exception in European social democracy, has gained relevance in recent months and has a way of working: Spain will contribute more socialist MEPs than any other country, and enjoys a competitive advantage over other Southern European partners such as Italy, which enjoys little popularity in Brussels.

In addition, the Spanish economy is stable, having just emerged from the excessive deficit procedure. It is the fastest growing in the eurozone (2.4% forecast for this year, according to the Bank of Spain), despite the enormous burden of unemployment (13.9% in February). For the time being, the continuation of loose monetary policy prefigured by the European Central Bank will be a tailwind.

Yet Spain faces a powerful narrative against its future role in the EU: that of a part of the Catalan independence movement. Just as in 2012, where there was prejudiced talk of Spailout, today the propaganda focuses on reviving the black legend. No European government has supported the thesis that Spain is undemocratic, but there are second-level actors who doubt and sow doubt. The verdict in the trial of the Catalan independence leaders will be a crucial moment that the government must handle with mastery and rigor, without the black and white reading that could just end up fueling nationalism and discrediting Spain.