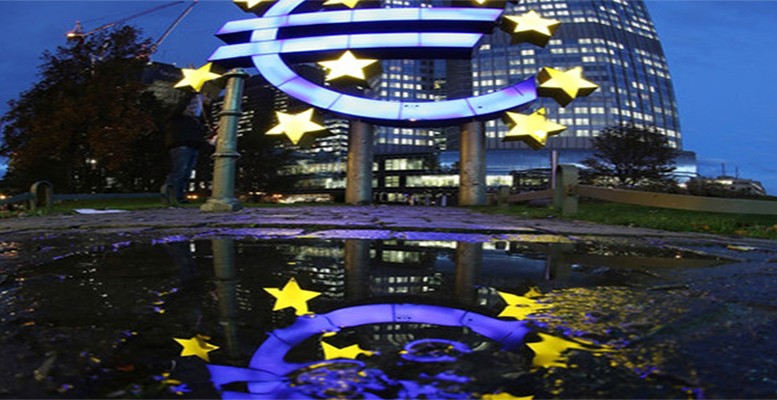 BofAML | No surprises. We do not expect any ECB action this week. After the package in March, we think the ECB will have a few months before going back to the drawing board. Dovish Fed tones and EUR appreciation do not help the ECB, but action beyond a reiteration of forward guidance seems very unlikely.

Still, Draghi could provide some insight on a number of aspects, including (1) the US outlook and implications for Fed and ECB policy divergence, (2) shocks that could prompt a reconsideration of deposit rate cuts, (3) tentative quantification of QE effects on growth and inflation and (4) the need for inflation overshooting, which Draghi alluded to in a recent press conference.

We expect Draghi to sound dovish and defend the ECB, but do not see a sustained market impact. He is likely to explain why the March measures reflect substantial easing and remind markets that QE will not stop as long as the ECB is missing its inflation target. The Euro has been weakening in recent days and such comments could reinforce this trend. However, more sustained EUR weakness requires a more confident Fed tone, in our view. We also expect little impulse from the ECB meeting for rates. The ECB in a tight corner

The ECB’s Governing Council probably expected some “peace and quiet” after delivering a package that exceeded market consensus last month. They might even have expected some praise. Instead, they are facing significant discontent, from those who think they are doing too much–in particular by taking rates into negative territory–to those who consider that they have become impotent following the euro appreciation and the still weak inflation expectations.

Even if the current exchange rate is close to the levels that last year repeatedly triggered verbal intervention and then action and is, in our view, a source of concern for the central bank, the Governing Council may not act for quite a while. Indeed, we believe the ECB can take comfort from the resilience in the real economy data–with the Euro area likely to significantly outperform the US on GDP growth in 1Q–as well as in the notion that the additional measures of March should gradually work their way (they have not yet started buying corporate bonds).

After the summer, we suspect the ECB will face strong market pressure to indicate if, as in our base case, they plan to continue buying after March 2017, and more importantly how, i.e., how it will tweak the current technical configuration of QE to deal with bond scarcity. However, in our view there is no immediate need for clarification, barring any major change in the macro outlook that could force early revisions in the stance.

Being criticized tends to come with the territory for a central bank. However, the ECB cannot please everyone, as was more the case when governments, banks and asset managers all had good reasons to welcome the ECB’s forceful action at the very edge of its mandate to deal with the sovereign crisis in 2012/13. Monetary policy “proper”, i.e., when it is really about price stability, is by construction more divisive, if only because it can pit the short-term interests of savers against those of borrowers. Still, when criticisms come from all sides, they can become an impediment for action if the market loses confidence in the central bank’s rationale, or if they constrain its choice of instruments for lack of political support.

We have been quite vocal since last year against further deposit rate cuts and think the central bank has put itself in a complicated position. Still, we also believe most of the criticism levelled at the ECB is not warranted. Rather, we think the European central bank is constrained by the current behavior of the Fed, which, in our view, is eroding its capacity to steer the market, as well as by the incompleteness of the Euro area’s institutional construct.

We note so far the German Chancellor has chosen not to follow her finance minister in his qualms about European monetary policy. It seems ultimately Angela Merkel considers the ECB to be an imperfect scapegoat. In our view, there is still no credible alternative to ECB accommodation to keep the Euro area together, even if the calm of the last two years has made a lot of observers discard many of the risks, the fragility of the construct should not be forgotten. Those with an interest in hampering the ECB’s room to maneuver would need to answer a very uncomfortable question: with what would we replace it?