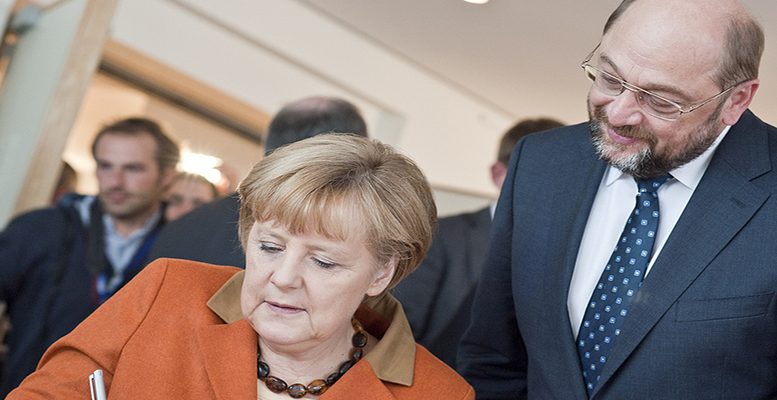 Four months after the elections, Angela Merkel and Martin Schulz sealed a deal on Wednesday to remould the “grand coalition”; the end of the political uncertainty in Germany will translate into greater stability for the Eurozone economy.

According to the agreement, the SPD will control the foreign, finance, labour and social policy ministries, while Merkel’s CDU will be responsable for, amongst others, economic and defence issues. From this point, and within a period of three weeks, namely for 3-4 March, the 450,000 members of SPD will have to approve the accord. In the event of not obtaining approval, new elections would be required, probably with a rather inconclusive result.

Over the last few weeks, the increase in affiliations to the SPD has raised the possibility that they will reject the agreement. This is something which should not be underestimated, given the division amongst the SPD decision-makers when it came to supporting talks with the conservatives. In fact, support for the SPD has fallend 17%, while in Merkel’s case it has dropped 30.5%.

For the time being, Intermoney analysts flag that the possibility of a lax voice from SPD taking on the job of Finance Minister helped strengthen the cooling off of the euro, while noting that the agreement reached in Germany will be positive for the Eurozone as a whole.

In 2017, and in line with preliminary figures, Germany’s public surplus reached 1.2% of GDP, equivalent to 38.4 billion euros. According to the experts:

Value would now be attributed to this figure via the stimulus of investment, an increase in public spending and tax adjustments. This is something which would not put Germany’s finances at risk, given that its public debt fell to around 65% of GDP in 2017.

Whatsmore, the SPD’s greater protagonism in economic matters will allow the Eurozone to leave behind the deficit in consumption and investment fostered by the orthodoxy of former German governments. Undoubtedly there was a need for adjustment in countries like Spain and Portugal. But countries like Germany or Holland with excessive current account surpluses also had to put an end to this situation. The problem is that the first group did their homework and the second didn’t. So the 12-month accumulated current account surplus in the EMU was 3.5% of GDP (386.1 billion euros) in November compared with the 1.5% drop in December 2008.

In other words, there is room to “loosen the belt a bit ” in the Eurozone. If the CDU/CSU-SPD agreement is ratified, this possibility could take shape, pushing growth in the area comfortably over 2% in 2018.

The outlook for Germany’s economy is positive and the Chambers of Commerce and Industry in the country (DIHK) have revised upwards their growth forecasts for domestic activity from 2.2% to 2.7% for this current year. In our view, the latter figure is somewhat excessively optimistic, although we believe that this year will be a good one for economic activity in Germany, translating into an advance of 2.2-2.3%. This is a figure which is not incompatible with the positive forecasts for invesment noted by the German Chambers, which also flagged that 54% of German businessmen think the current situation is positive compared with the 6% who tend to view it as negative. That said, against this optimistic background, the lack of a qualified workforce in Germany should not be underestimated, as this will limit its growth capacity.

If the agreement is approved, Merkel could embark on her fourth mandate towards Holy Week, thus putting an end to the longest period in Germany without a government since World War II.