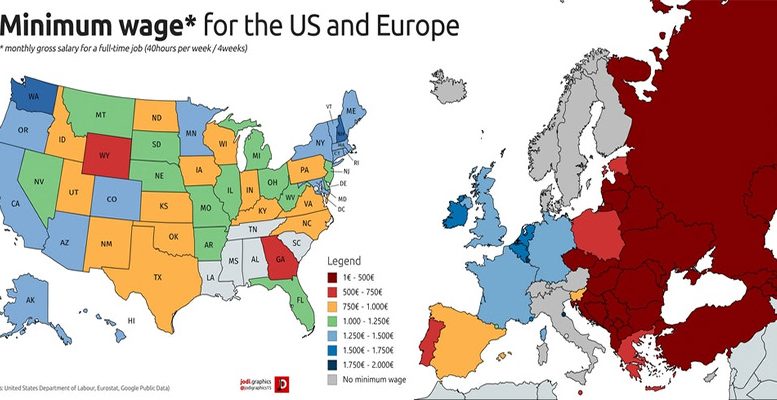 Establishing a minimum wage is a policy which is widely extended in the UE: 22 countries implement it. That said, it is not free from controversy. In general, says CaixaBank Research setting a minimum wage aims to protect workers with fewer qualifications and/or work experience. “But depending on the level at which it is set, it can have a negative effect on employment”, points the house.

Going into more detail, the analysts comment that in a competitive labour market, a salary usually reflects the productivity of the workers: the higher a worker’s productivity, the salary usually goes up. So establishing a relatively high minimum wage can act as an incentive for the automation of productive processes and make it more difficult for less productive workers, who are normally those with less training and/or work experience to access the labour market.

But it can also happen that some workers accept a job with a salary which is less than they bring to the company. That can happen, for example, if they see it’s difficult for them to change jobs. In this case, a minimum wage could help workers with lower salaries who find themselves in this situation. In any event, the higher the minimum wage is, the greater negative effect commented on at the beginning. And, in general, the positive effect is usually less.

What is the minimum salary where the benefits are higher with respect to the potential costs involved? After several decades of intense debate in the academic world, economists have still not reached an agreement. In general, at the levels where the minimum wage is currently situated in the majority of the developed countries, the empiric evidence shows that the negative impact is moderate in aggregate terms. In any event, several studies also point to the fact that the impact is more pronounced for specific groups, like the youth or low-skilled workers, precisely the groups which need to be protected.

In order to minimise this negative impact, the decision-making process for the level at which the minimum wage is set is relevant. Amongst the EU countries, the mechanism for establishing this varies: some governments establish it directly via legislation and others use a process of negotiation with social agents. Anyway, CaixaBank Research believe that it’s important that whatever mechanism is used that it’s not just transparent, but also rigorous.

In the respect, there is the example of countries like the UK, Ireland and Germany where the introduction of a minimum wage is recent. In these countries a committee of independent experts makes a detailed evaluation of the impact of the minimum wage on employment and offers a binding recommendation to the government. Whatsmore, part of its recommendation usually includes setting lower levels of minimum wage for those groups which could be more adversely affected by a bigger minimum wage, like young people without any work experience.

However it’s done, trying to minimise the negative impact on employment, the minimum wage usually ends up being set at relatively low levels. So it has a limited role when it comes to improving the conditions for workers with less income. Therefore, in order to protect those workers, it’s useful to bear in mind other courses of action. In the first place, obviously, improving his training and employability. And there is wide-ranging agreement amongst economists over this kind of policy. Furthermore, it usually has an effect on the tax pressure in the case of those less fortunate groups. A mechanism which allows for an increase in the income of these workers is the introduction of a supplement to their salary, like the Working Tax Credit in the UK. This does not have a direct negative impact on employment and can target those less fortunate groups, which makes it more efficient. Finally, to improve the conditions of those people earning less, including those who can’t find work, the use of conditional loans as the minimum wage is also being considered. They can be useful if they are designed and implemented correctly.