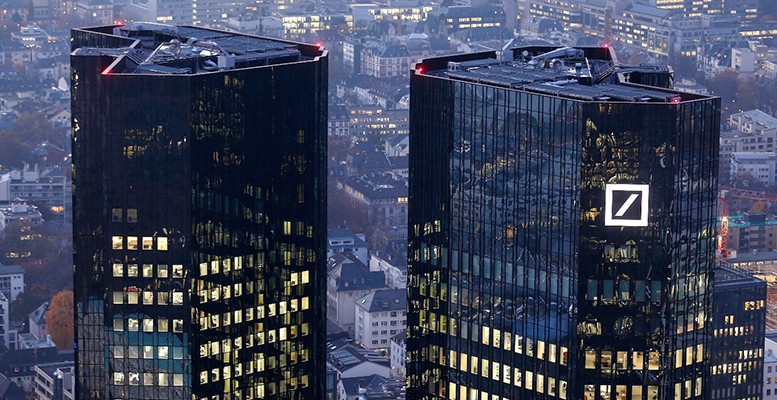 The headquarters of Deutsche Bank is photographed in Frankfurt, Germany, Tuesday, Nov. 13, 2012.

Although the indicators show that the developed economies’ growth is solid, albeit scant, many analysts and experts believe the banks are bearing the brunt, at least in Europe. And the sector has had the worst stock market performance so far this year.

Against a backdrop of excess liquidity in the Eurosystem, close to 600 billion euros, investors have decided to turn their backs on European banks. This has led to an over 22% drop in the sector index just since the start of the year, wiping off nearly 350 billion euros in terms of market capitalisation.

Spain’s banking sector is not removed from what’s happening in the European stock market, although analysts consider it is in excellent shape when compared with the German or Italian banks. They still need to undergo surgery, which they didn’t do at the right time and Spain did.  But that’s the way it goes, and Spanish banks saw their stock market price drop by over 20 billion euros in January.

You can say anything you like about the Italian banks, bar the fact that they are healthy. And their situation is a cause for concern for the Eurogroup’s financial and monetary authorities. In general, their accounts are not clear, there are 201 billion euros of impaired loans and a bad debts’ ratio which some put at 17%. There are new banks up for sale which can’t find a buyer and four lenders pulled back from the brink of bankruptcy.

But that doesn’t seem to have been sufficient either and the sector is in once again in difficulties, as can be seen with Deutsche Bank. The country’s top bank has seen its stock price tumble, its prestige dented. And its chairman has been obliged to explain something that can be risky in banking: that it can pay its debts.

It has presented losses of 6.7 billion euros and suspended dividend payments for two years. The bank has also announced a draconian restructuring plan, involving laying-off 35,000 employees in two years and closing down operations in 10 countries. From the start of the year, Deutsche Bank’s stock market value has dropped 41% and is now around 22 billion euros. All the above increases the burden of the legal disputes which the bank is involved in for irregular practices.

The President of the Supervisory Council at the European Central Bank, Daniele Nouy, recently told the Strasbourg Parliament that the most important European banks have a Tier 1 capital ratio of about 13% compared with 9% in 2012. This means the European banking sector is now much better prepared to absorb unexpected financial or economic shocks than it was a few years ago.

The European Banking Authority (EBA) has finished defining the nature of the stress tests, as well as the scenarios the 51 largest European banks will be subject to in 2016. These include Santander, BBVA, CaixaBank, Bankia, Sabadell and Popular. The EBA will try to evaluate the solvency of the banks and and the risks they face. But given the situation of the Italian and German lenders, after the last stress test, there are more and more people who believe there is a certain amount of complicity going on to hide the real situation of many of the banks in both countries. Particularly with regard to an increased demand for high-quality capital, something which Daniele Nouy has been quick to rule out, without waiting for the results of the next stress tests.