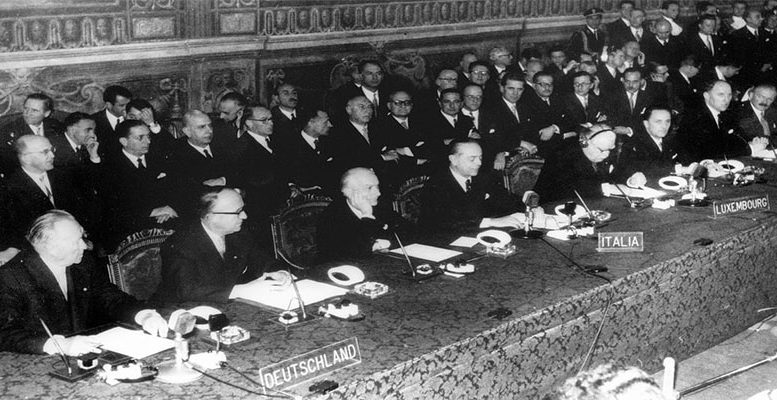 All European Union members except the UK are meeting today in Rome to celebrate the 60th anniversary of the so considered seed of their club: The treaty of Rome. An event with a bittersweet taste however since the participants will start designing a common strategy on Brexit –next Wednesday British PM Theresa May trigger on Article 50.This will officially mark the start of the UK leaving the European club, the first exit of a member state.

The truth is that since the outbreak of the financial crisis in August 2007 the EU has gone into a spiral of misfortunes that don’t seem to be coming to an end just yet. The prolonged euro crisis resulted on the longest period of deflation ever seen in the region. It finally seems to be over (at last the ECB’s long pursued target of 2% has been reached), but the political environment in the European Union remains too unsafe.

The rise of populist parties and voters’ dissafection evoke the possibility for a new euro exit.  Most of media seem to feel comfortable talking about Frexit, Nexit, as if they could ever become true. So far, and despite thousands of press headlines and many vested interests, Grexit never happened.

The external instability coming from the US under Donald Trump and Russia under Vladimir Putin are not of much help. The constant threat of Islamic terrorist attacks and the never-ending refugee crisis- already seven years of Syrian diapora- add to the gloomy feeling. How can the European Union cope with all that? Is it really possible to manage those challenges?

And who is leading Europe at this time? Merkel, Hollande, Rajoy and Gentiloni held a brief summit some weeks ago in order to put the EU back on the right track.  Are these leaders the Union’s current backbone ? Hopefully they will strenghten the relationship among the EU partners, although the 60th  birthday of their integration is likely to be a bittersweet one.