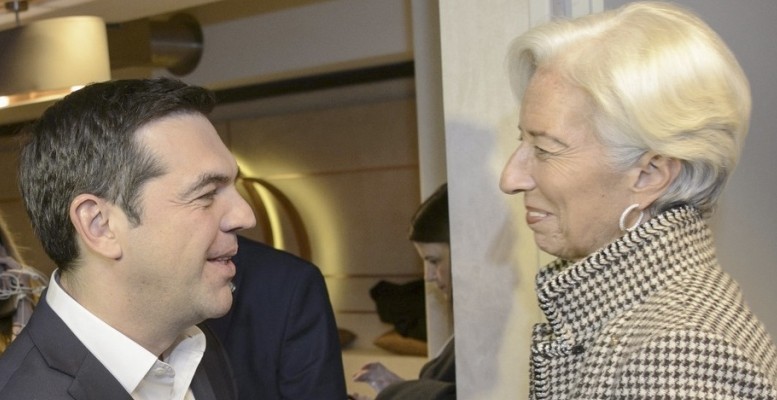 Yiannnis Mouzakis via Macropolis | Following Saturday’s leak of the exchange between the International Monetary Fund’s European Department director Poul Thomsen and the head of the mission to Greece Delia Velculescu, Prime Minister Alexis Tsipras’s reading of the situation and his reaction to the WikiLeaks publication were puzzling.

Even though I have not refrained in the past from highlighting the IMF’s responsibility in Greece’s economic disasters, it was difficult to work out what Tsipras wanted to achieve by reading the transcript in a certain way and seeking to alienate the Fund.

Tsipras saw in the leaked call the intention of the IMF to use a credit event to put extra pressure on Greece. In his letter to International Monetary Fund managing director Christine Lagarde he suggests that the IMF is threatening to delay the review “in the belief that only a credit event will work to extract concessions.”

But is this what the transcript actually reveals?

The exchange starts with Velculescu having reservations about making a commitment to return to Athens for the continuation of the review, which resumed on Monday. She thinks that not enough progress had been made in the first round of discussions and that the couple of weeks between mid-March (the call appears to be taking place on March 19) and early April would not be enough to bridge the gap between all the parties.

Velculescu also expresses concerns about the timeline that would have to be followed for the review to be concluded within a 10 days, or at least to have enough progress to report by mid-April when the IMF’s spring meetings take place and for which there appear to be plans to discuss the Greek debt issue.

A good part of the exchange is devoted to logistics and dates, which emphasise Velculescu’s concerns that there will be insufficient progress by mid-April, at which point another IMF participant in the call highlights that before pausing for Easter there is a need to have agreed on 2.5 percent of GDP in measures, which I believe relates to the minimum volume of fiscal interventions that Greece will need to take to satisfy the IMF.

The IMF thinks that even if this 2.5 percent can be agreed, it is not enough to reach the programme’s ultimate goal of 3.5 percent of GDP goal. Velculescu explicitly states that it’s not just the amount of austerity that needs to be agreed but also where the primary surplus will land following the implementation of the measures.

Thomsen argues that even if he gets the minimum fiscal effort commitment of 2.5 percent, he will inform the eurozone that this is not enough to reach the programme goal by 2018 and that it should be based on a 1.5 percent of GDP primary surplus target. Probably based on prior experience, he anticipates the eurozone’s response will be to “stack more measures” and continue the review.

Thomsen wants 2.5 percent of solid and broad interventions, not small measures, which Velculescu confirms is in line with the measures coming from pension reforms, tax reforms and other indirect taxation, as well as changes to the public sector wage bill.

At that point, Velculescu suggests that although the broad categories of savings have been identified there are differences in the combination of measures due to political sensitivities in Greece. She also raises the issue of publishing the IMF’s debt sustainability analysis (DSA).

Velculescu focuses on the fact that it was not clear how all the pieces could come together to produce something conclusive both in terms of the review and the DSA, allowing the IMF to tick all its boxes.

This prompts Thomsen to make the most contentious comment of the exchange. He suggests that if past experience is anything to go by, the eurozone, makes a decision when Greece is about to run out of money and default. Greece has a sizable payment to the ECB in July and Thomsen sees that date as a hard stop, assuming that the eurozone would avoid any discussion on Greece in the run up to the British referendum on EU membership on June 23.

With the risk of default on the ECB concentrating minds, the Germans would face the dilemma of having the IMF quit the programme, making it tougher to sell to the Bundenstag, or having to provide the debt relief that the IMF thinks is required in order to stay on board.

Thomsen appears surprised that the refugees crisis has not acted as an incentive on the side of the eurozone to have a decision, probably on the assumption that they would want to have the matter resolved given that the latest EU deal with Turkey and the closure of the borders effectively forced Greece to shoulder the refugees crisis on its own, triggering a humanitarian crisis in the country.

Velculescu is also surprised that the refugees crisis did not act as the event that would accelerate matters and even wishes for the sake of Greeks that the discussions do happen soon, at which point Thomsen suggests that the eurozone is just leading Greece on simply because there is nothing to force a decision. Thomsen argues that the discussions could go on forever until eurozone leaders decide that there needs to be an agreement that will include both primary surplus targets and debt relief.

Velculescu believes that although politically it is difficult for Greece to fully deliver what the IMF wants for the 2.5 percent of fiscal measures, the Greek government has given already enough ground from its original position. Thomsen stresses that if there is a solid package of austerity that adds up to the 2.5 percent, then the IMF would support the Greek side.

At that point Velculescu makes explicit the division in the troika, which is obvious enough for the Greek side to try to use to its advantage and deliver less than what would satisfy the IMF since it knows the European Commission would go softer on Athens. Velulescu also challenges the IMF strategy in the negotiations which have left it with little room to maneuver. She believes that they should have agreed with the Commission a set of measures that would have been much “worse” and present to Greece as the minimum the IMF would be willing to consider, a strategy that is believed to have been followed in the past when the troika was in unison.

Overall, there is nothing in this exchange that justifies Tsipras’s assertions. What was stated by the IMF officials is nothing but the obvious and in keeping with what those following the crisis were already aware of.

The way the eurozone has managed this crisis is to take lots of little steps before a major event forced it into sudden action to avoid a disaster. It happened in the case of Greece, for Ireland, for Cyprus, Spain, the EFSF, the ESM, OMT, the so called banking union, and QE. There is nothing in the WikiLeaks transcript that suggests the IMF is planning to engineer an event that would lead Greece to near default.

If anything it appears that the IMF was hoping the refugee crisis would act as catalyst for a decision, which also counters the argument that it is playing delaying tactics.

It is no secret that the IMF, and Thomsen in particular, think that in order for Greece to reach the 3.5 percent of GDP target it will require massive fiscal effort in the volume of 8.5 to 9 billion euros, or 4.5 percent of GDP. He actually blogged about this roughly a month before that conversation took place.

The exchange suggests that the IMF’s view is that the target for Greece needs to be lowered to something more realistic, which would not require draconian austerity but would need debt relief.

This was a call looking for ways to accelerate the process, not delay it. It suggests less austerity by lower primary surplus targets, keeps the issue of debt relief on centre stage, shows willingness to back Greece if there is a combination of credible reforms and fiscal measures, places blame for the delay on the eurozone’s side and even goes as far as showing sympathy in relation to the refugees crisis.

For some reason, Tsipras decided to take upon himself an issue that should have been one for Greece’s lenders, or even just the IMF and Germany, to haggle over. This wasn’t the time for him to add to his long list of miscalculations.