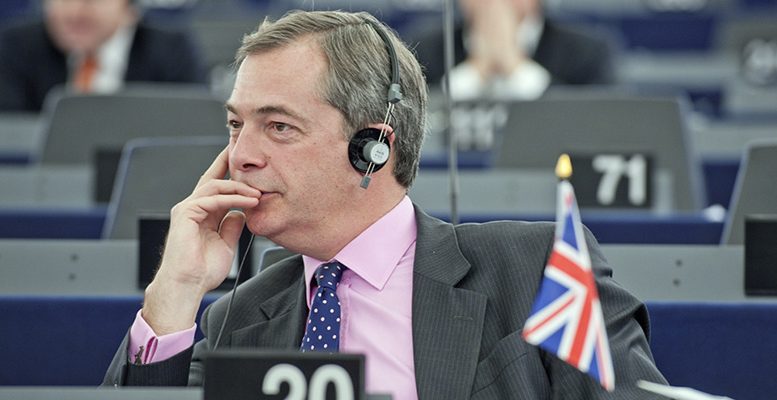 Until early this year it seemed unlikely that an extreme idea lingering for two decades on the political fringe could turn into a mainstream choice preferred by majority of British voters as happened on June 23. Ukip’s leader Nigel Farage declared victory: he has for decades championed leaving the European Union but that was only half of his political double bill.

“The phrase, ‘I’m not racist, but…’ could be invented for some of the things Farage has done in politics,” Tory MP Damian Green said on BBC’s Daily Politics on the day Farage announced his resignation as Ukip’s leader. Stressing he was not accusing Farage of being a racist, Green added: “He encourages feelings that are unhelpful and destructive, and that’s what he’s always done for his political career.”

Farage denies it, leading “Leave” politicians also deny it but in addition to the Ukip fanfare policy of leaving the European Union, Farage and Ukip have unashamedly brought something else to British politics, propagated by the whole “Leave” campaign: xenophobia and outright racism.

The political legacy of the victorious Farage is not only Brexit but the destructive sentiment of xenophobia, particularly appealing to older voters. However, Brexit would never have happened without support from established politicians, most notably Tory politicians like Boris Johnson, Michael Gove, Andrea Leadsom and Labour politicians like Gisella Stewart. With their support, the once so extreme view of leaving the EU, laced with xenophobia, is now mainstream.

In a speech on 22 January 2013 Prime Minister David Cameron promised to renegotiate UK’s membership of the European Union: no later than 2017 should the British people be given a “simple choice” of a continued EU membership on renewed terms – or leaving the EU.

As so many of his generation in the Tory party Cameron had never shown any particular interest in European matters but the EU has always come handy when a scapegoat was needed: all evil came from Brussels, the brilliance from Tory policies and their leaders.

Given the momentous pledge in 2013, Cameron’s attitude towards the EU was strangely enough no more enthusiastic than earlier. So, after eleven years as a Tory leader and six years as prime minister two months of campaigning didn’t make up for his earlier disinterest in all things European.

At the time of Cameron’s pledge, Farage’s Ukip was enjoying a record following of 10% in the polls, also worrying for Labour. Cameron was not prepared to call a referendum to rid the Tory party of dissident anti-EU ideas and Ukip’s influence.

What Cameron and those around him didn’t seem to understand or didn’t believe was that Ukip’s speak was permeating the mind of so many Tory MPs underpinning not only Brexit but also the other part of the Ukip double bill: the xenophobia and racism. These two currents united in the “Leave” campaign where the political pondus of the likes of Johnson and Gove gave wings to Ukip’s mission.

The seeds for the Brexit disaster were already sown by Cameron when it came to posing the 2016 referendum question: the choice was no longer simple, as it had indeed been in 1975, but a muddled one.

In 1973 the British Tory government led by Edward Heath, decided to join the European Community, a decision tested in a referendum under Labour’s Harold Wilson in 1975; 67% of those voting said yes. Although the motives and arguments were manifold the question – to join or not – was clear and unequivocal.

The recent referendum had a clear “yes” option in the “Remain” but the “no” option, “Leave,” was ambiguous. Wrapped up in the “Leave” was Ukip’s original goal of Britain leaving the EU, never a mainstream opinion in Britain until the referendum – and the stated goal of many Tories inter alia Boris Johnson who argued for his position by claiming Britain would secure a better deal by voting “Leave.”

Farage’s “out” and the “get a better deal” propagated by non-Ukipers gave the “Leave” campaign a bumpy start. Interviews with the Tory “Leavers” waving the “better deal” gave rise to the obvious question what would qualify for a “better deal” leading to unexciting answers.

With the “Take control” slogan things took a better turn for the “Leavers.” Although that also invited convoluted discourse – control of what and what would this new era of British control imply – this slogan could be connected to all relevant issues, be it immigrants or the NHS.

Now, the various sentiments awoken earlier by the fringe Ukip could easily be merged into mainstream Tory speak, useful not only to unruly Tory backbenchers but to leading Tories like Johnson and Gove.

As the voting stations closed June 23 Farage still seemed to believe his long-time apparently so ludicrous goal of pulling Britain out of the EU was lost; seven hours later he was a triumphant if stunned winner.

Contrast Farage’s celebratory appearance with the funeral demeanour of Johnson and Gove when they finally made a public appearance late Friday morning. Their ashen faces indicated they realised they would now need a plan, which they didn’t have. Demagogy and burning ambitions are two sentiments notoriously difficult to harness – a few days later their political fortunes had turned but that is another story.

Farage, leading a fringe party, didn’t feel obliged to have a plan. He had wanted a Brexit, getting it was all he needed to claim victory and he could resign (though given his career of resignations it’s a different matter if he really is leaving politics).

The Ukip xenophobia: from extreme to mainstream

Damian Green’s epitaph of Farage building his political career by encouraging destructive ideas sums up one view of Farage’s political contribution. Farage may fade out of UK politics but his message lingers on among those who took note of his message as they had never before. Not because his message was better or different than it has been for decades but because established and leading politicians adopted and legitimised his stance.

By adopting Farage’s stance on the EU, Brexit supporters like Gove and Johnson, not to forget Andrea Leadsom, also propagated the other part of the Ukip’s political bill, the xenophobia with a whiff of racism. Here, the “Remain” stance of the Labour leadership, especially Jeremy Corbyn, was lamentably weak.

Leading Brexiters from the two big parties vehemently deny xenophobic intentions and undertones but that is too late: thanks to the Brexiters outside of Ukip these views have entered the political discourse. Again, what once was extreme is now mainstream.

The once so loony and laughable

To be exact, this legitimation hasn’t only happened in the last few months. For years, instead of rebutting the often hugely misleading statements from Ukip on immigration with facts and figures established mainstream politicians came to echo the Ukip view. Also, by not engaging the fact that concerns on immigration were the embodiment of simmering anger over political failures since the 1980s was lost.

Already in 2006 Cameron called Ukip “a bunch of … fruticakes and loonies and closet racists mostly.” Like Cameron, established politicians saw Ukip as a crazy fringe party: there was no need to argue with Ukip, no need to correct Ukip-ers’ misleading statements. In the media, largely sympathetic to Ukip’s views, the party was often ridiculed but almost in an endearing underdog way with Farage clowning on BBC’s Have I Got News For You.

With time, there was the seducing option for established politicians to use these sentiments for their own political advantage inter alia by blowing problems with immigration out of all proportions and blaming the immigration on EU rules.

The referendum “Leave” campaign showed that Ukip had by now shaped the immigration debate: further, its views were legitimised by Tory “Leavers” campaigning for a cause earlier only touted by Ukip with arguments earlier only used by Ukip. – This is the grin the parting Farage leaves in British politics.

The Danish political environment is fundamentally different from the British one but similarly to what has been happening in Britain, xenophobic sentiments, tinged with racism permeated Danish politics in the years up to the elections in 2001. Ukip’s sister party Danish National Party emanating these ideas, jumped from a fringe position with 7% of votes to being the third largest party with 12% of votes and a decisive influence.

In the previous years DNP, founded in 1995 but an offspring of 1970s right-wing currents, had put pressure on the established parties, both the centre-right parties and the Social Democrats, leading many politicians to concede to and echo the DNP view instead of debating it. Buoyed by its 2001 results DNP came to shape Danish immigration policy and the political language: what could earlier not be said had been legitimised. With 21% of votes in the 2015 DNP is now the second largest party in Denmark after the Social Democrats.

Interestingly, in Denmark immigration hasn’t been blamed on EU but been a domestic bone of contention. In spite of sceptic EU-attitude there is no appetite in Denmark to leave the EU and hasn’t been for years. DNP, which used to be anti-EU has without fanfare abandoned its anti-EU stance.

When David Cameron, under pressure from Ukip, promised a referendum he might have been lured by an easy game against “loony fruitcakes.” Following an albeit narrow win in the 2014 Scottish referendum and in the 2015 general elections he lost the EU referendum and together with that loss, xenophobia and worse has come to stay in British political debate.

The economist Joseph Schumpeter (1883-1950) claimed the welfare system would be in danger when the sense of entitlement to gain from it was greater than the will to contribute to it. Similarly, democracy is in danger when politicians take it too much for granted and can’t be bothered to argue with ideas that undermine it. After all, being in power means not only having power to take action but also to sway and influence opinion.