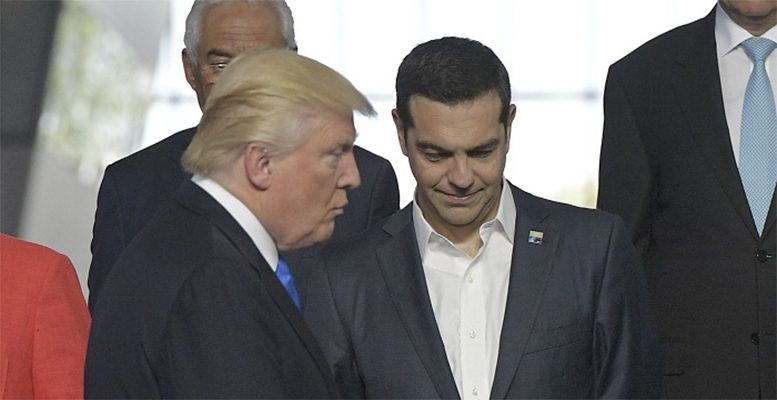 Nick Malkoutzis via Macropolis | Alexis Tsipras’s recent visit to the USA was something of a curate’s egg, ranging between high diplomacy and acute embarrassment. It would be wrong, though, to dismiss its implications.

The Greek prime minister’s mistranslation and mangling of a Greek proverb during the final appearance of his long trip, at the Brookings Institution in Washington, left the impression of a local politician out of his depth on the international stage.

Apart from this toe-curling moment, the government was also left in the awkward position of having to explain the details of a deal to upgrade most of its fleet of F-16 fighter jets in the US after it was announced by President Donald Trump following his meeting with Tsipras at the White House.

The overall price tag of 2.4-billion euros, which will apparently not all be paid by Athens, and the fact that Trump suggested the deal was a great way to protect American jobs, were – understandably – pounced upon by the media and opposition parties.

It should be pointed out that the discussion about modernising the plans has been going on for several years. Nevertheless, the announcement of the agreement could have been managed better by the Greek government, which often argues that it has implemented billions of euros worth of tax hikes and spending cuts against its will over the last 2.5 years.

The nature of these developments may be striking but it is the geopolitical aspect of Tsipras’s trip that will have more of a lasting impact.

As the prime minister suggested in the Q&A session after his speech at Brookings, Greece finds itself in a region that has frequent bouts of instability and uncertainty. It is going through one of those periods at the moment.

Tsipras told the American audience that Greece’s neighbour, Turkey, can be “unpredictable” and “aggressive.” Defending the decision to improve Greece’s air force capability, he claimed that he would rather not spend “a single euro” on defence but that when you are bordered by Turkey rather than Belgium or Luxembourg, it is impossible not to ensure that you can defend yourself.

It is easily forgotten within Europe that Turkey and Greece were on the brink of war in 1996, when Washington intervened to ensure that things did not get out of hand. The constant incursions into Greek air space and territorial waters by Turkish jets and vessels, as recorded by military officials in Athens, are also easily skirted around by some European partners.

In fact, the European Union’s overall approach to geopolitical issues on its southeastern flank seem more of an afterthought than a concerted policy. This was one of the things that Washington has repeatedly tried to point out to European officials during the management of the Greek crisis and was a key theme during Barack Obama’s visit to Athens late last year.

He underlined that “it is in all of our interests that Greece succeeds,” placing this within the context of NATO, the refugee crisis and European/global prosperity.

The message delivered by Obama – that despite being positioned on the edge of the EU (or exactly because it is located there), Greece has a significant role to play in the areas of energy, migration, defence and trade – was repeated by Trump in the White House’s Rose Garden after he met with Tsipras.

“Well, I’d just start by saying that I think it has a great role in stability in the area. We have a feeling that it will get stronger and stronger,” said the US president.

He also made reference to Greece’s contribution to NATO and its hosting of the US navy in Crete. “I want to thank the prime minister and the Greek people for serving as gracious hosts to our US naval forces at Souda Bay,” he said. “I also commend Greece for being one of the few NATO countries currently spending at least 2 percent of GDP on defence.”

Greece’s expanding role in ensuring that Europe is not over-reliant on Russian oil and gas was also underlined by the American leader.

“On energy, we appreciate Greek contributions to European energy security through its support of the Trans Adriatic Pipeline, the Greece-Bulgaria Interconnector, and liquefied natural gas facilities that are capable of transporting diverse sources of energy to Europe, including potential liquefied natural gas exports from the United States,” added Trump.

Like Obama, he also stressed the importance of providing Greece with what he called “responsible debt relief.” The “responsible” part presumably applies as much to eurozone politicians having to accept the implementation of a measure that will be unpopular in their countries but best for the eurozone’s future as it does to the current and future Greek leaders, who will have to ensure that this gesture is not wasted.

The fact that two so different US presidents, with such divergent styles and views, should stress the same points regarding Greece almost 12 months apart from each other says something salient about the country’s position on the geopolitical chessboard, as seen from Washington at least.

They are all points that the US Ambassador to Greece, Geoffrey Pyatt has been trying to drive home since his appointment last year. Soon after taking over from his predecessor David Pearce, he explained why he thinks Greece holds such a vital geopolitical role.

“I always talk about a three-circle Venn diagram that has, in one circle, North Africa and the Maghreb, in another circle the Eastern Mediterranean, Syria, and then, in a third circle, the Black Sea region, a more aggressive and expansive Russia,” he told Kathimerini in an interview. “The place where that Venn diagram comes together is in Greece.”

In an op-ed in Ta Nea newspaper, Pyatt argued that Tsipras’s visit had been a success because it reaffirmed Greece’s position as one of the US’s “most steadfast and reliable” allies. Apart from defence, he highlighted energy and trade as two areas in which cooperation between Greece and the US can grow.

“We are also looking at our role as the 2018 Honoured Country at the Thessaloniki International Fair as a concrete symbol of our economic support, and both leaders mentioned its importance to advancing our economic relationship,” wrote Pyatt, who has spent much time on the road in Greece, travelling the country and seeing first-hand what opportunities it has to offer. “It is the largest trade and investment fair in the Balkans, and is hosted in Thessaloniki, a city with a history as a crossroads of civilisations located in Greece’s strategic north.”

Emerging from the crisis that has absorbed so much decision-making capacity and disrupted the economy so heavily gives Greece an opportunity to take stock of its place in the world and put more emphasis on developing ties rather than just fighting fires.

Despite a sudden change of direction in the White House on many issues, Washington continues to recognise the potential that Greece has in many areas and, above all, its geopolitical importance as what Pyatt called “a pillar of stability in its region.” The question is whether Greece’s European partners will begin to see things through a similar prism and if Greek leaders will start to act accordingly.