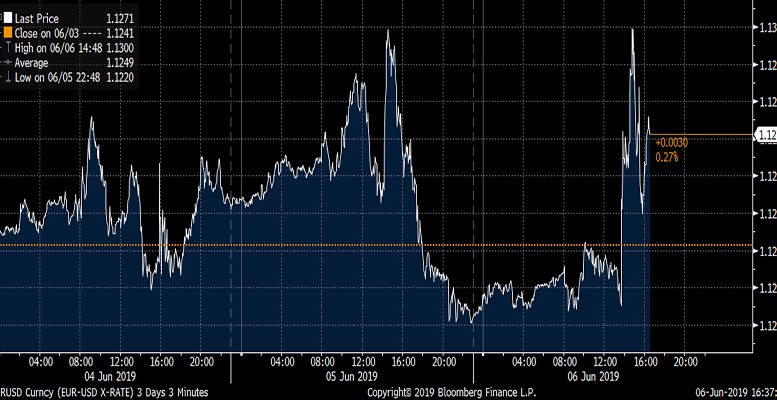 “There is no probability of deflation, there is very low probability of recession, there are no threats of de-anchoring of inflation expectations,” Mario Draghi said on Thursday. The governor of the European Central Bank announced once again – as he did in March – that it will delay the rate hike at least until 2020 and kept all options open, especially in case economic prospects deteriorate. ECB’s decision is in line with those of other central banks in the world. The Fed has just opened the door to a rate cut, something that Australia and India have already done.

“The prolonged presence of uncertainties related to geopolitical factors, the rising threat of protectionism and vulnerabilities in emerging markets is leaving its mark on economic sentiment,” Draghi said.

“Although the period of low rates is prolonged further, some analysts have been surprised that the ECB has not indicated that the rates could also be reduced in the coming quarters. In fact, the ECB’s growth and inflation expectations for this year have been revised slightly upwards, although they have been generally reduced for the following years,” says Andrea Iannelli, Director of Fixed Income Investments at Fidelity.

“Markets expected an adjustment of monetary policy with more than 50% probability, so the announcement reflects a greater confidence in the current policy path of the ECB,” Olivia Álvarez, an analyst at Monex Europe in Spain commented.

Intermoney analysts highlight that the expectations of investors have been reinforced. They already go beyond keeping rates in the medium term, since the future of the 3-month Euribor with June 2020 expires yields an implicit rate of 0.41% and the OIS curve in euros, in the spring of 2020 , allows to extract a probability of about 40% to a deposit facility in -0.5% and 20% to be -0.6%.

In addition, the ECB gave more details of the new round of long-term repurchase operations (TLTRO III), without major surprises. Eurozone banks will have access to long-term financing from the ECB at interest rates between -0.3% and + 0.1% (therefore, 10 basis points more “expensive” than TLTRO II). The real rate will again depend on how much the banks expand the net loans to the real economy, encouraging them to expand credit. These rates will effectively rise or fall with the key reference rates of the ECB

“Given the very low yields, there is room for central government bonds in the Eurozone to perform less than other markets, particularly with respect to US Treasury bonds. However, with inflation still very weak and the risks arising from the tensions of world trade, the ECB is willing to act in European bond markets and has much room to do so. Therefore, our base hypothesis continues to be “lower for longer,” Fidelity analysts pointed out.