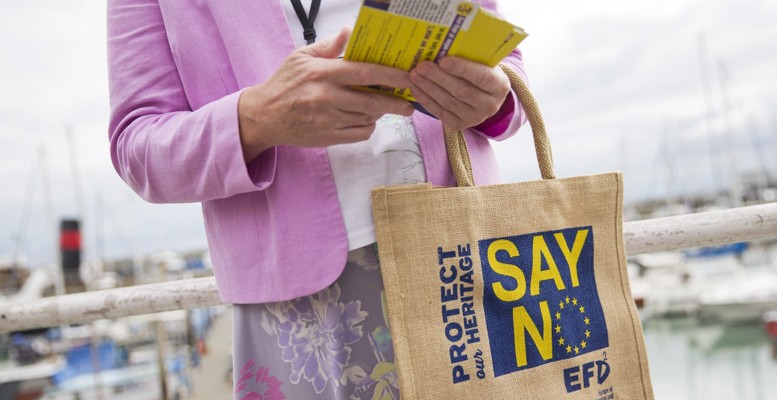 James Alexander via Historinhas | It is reported that 90% of UK economists are in favour of the UK remaining in the EU. They have carefully considered the costs and benefits of the UK leaving and mostly decided the economic loss is great, up to 8% of RGDP by 2030 – or around 0.5% per year for the next 14 years.

Yet right here, right now the UK is currently losing 1% of RGDP per year from tight monetary policy pressuring NGDP growth to below 3%. But there are no round-robin letters from these economists, no blog campaigns, no nothing.

In August 2015 we warned that UK NGDP had fallen to below 3% in 2Q15 driven by a rapidly shrinking growth in the GDP Deflator, indicative of near deflationary conditions.

Back then the Governor of the Bank of England was clearly warning that tight money was ahead. It had the effect of reducing NGDP growth further. There was virtual silence from these 90% of economists, except for one or two notable, mostly overseas macro-economists, like Danny Blanchflower.

The weak trend in RGDP fuels concern about the management of the economy and adds fuel to the Brexit flames. Similar trends occur in other countries: weak NGDP, weak RGDP, protest movements.

Market Monetarists are clear, below trend growth in NGDP will drag down RGDP. We would like to measure expectations for NGDP growth but that is tough. Longer term government bond yields are not a bad proxy and they are low and going lower in the UK despite Brexit fears about potential credit downgrades caused by Brexit. Of course, global slowdown fears could be trumping UK credit rating fears, but this would still put those latter fears into perspective, i.e. no big deal for the UK’s credit rating or at least for the consequences of downgrades.

Since the 2Q15 slowdown in NGDP the situation has mostly worsened and dragged down RGDP. Trend growth in NGDP was 5.3% in the UK 1992-2007 and trend growth in RGDP nearly 3%. Since 2010 NGDP and RGDP growth have averaged 3.8% and 1.8% respectively.  Every time RGDP has moved it appears to have been dragged up or down by NGDP. With NGDP growth averaging 2.4% over the last four quarters we would expect RGDP to be dragged down from its below 2% current level to closer to 1%.ç The charts below give a more striking view of the depression caused by misguided monetary policy. The same outcome can be seen in the US and Eurozone, indicating that even monetary policy mistakes have become “sinchronized and globalized”! Because of the neglect of NGDP growth by the Bank of England under the targets set by the UK Government, RGDP growth is running perhaps 1% or more below trend. This figure compares with the 0.5% below trend that could result if the worst fears of 90% of UK economists are realised.

Yet there is a deafening silence on this current disaster and a very loud campaign about Brexit. These UK economists and their claque in the press and social media should be ashamed of themselves.