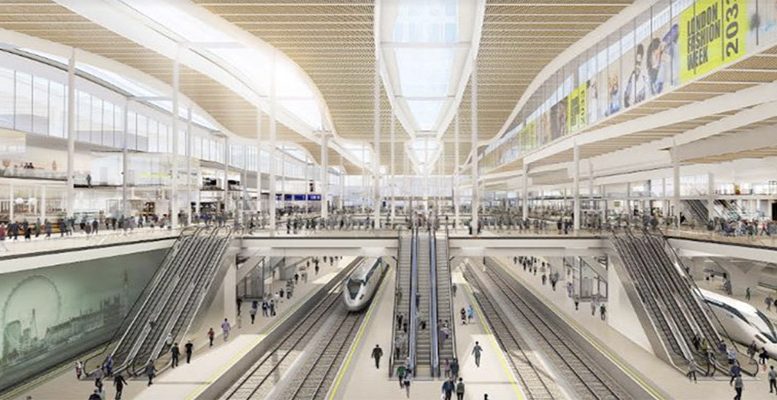 In 2019, ACS was also awarded the construction of Euston station at London

ACS has been won, in consortium with the British company Mace, a contract valued at 660 million euros for the construction of a new high-speed train station in Birmingham (United Kingdom), which will not produce any polluting emissions once it comes into operation.

The group headed by Florentino Pérez has been awarded this contract through its subsidiary Dragados, according to the promoters of the so-called HS2,-the acronym in English for high-speed rail-a project that will connect London with Manchester and Leeds and has a total budget of 125 billion euros.

The new station in Birmingham, in whose construction ACS will participate, will have more than 2,800 square metres of solar panels installed on the platform roofs, will include a technology to capture rainwater and will adopt an environmentally friendly design.

The British company Laing O’Rourke and the Spanish company Ferrovial, which ACS also beat in 2019 when it was awarded the construction of another of the stations that will form part of this high-speed network, on that occasion in London, for 2 billion euros.

However, Ferrovial is also present in HS2 after it took a 15% stake in the consortium led by France’s Eiffage in April last year, which has been awarded the construction of one of the sections of the line, a contract worth around 2.6 billion euros.

Likewise, the group headed by Rafael Del Pino has recently joined the list of companies competing to win one of the four contracts valued at more than 2.1 billion euros for the electrification and installation of the mechanical systems on the railways.

This high-speed line will offer a frequency of up to nine trains per hour and, in the case of Birmingham, passengers will be able to continue their journey on the underground, which connects the city and its metropolitan area, on the rest of the rail services and on the local bus network, as well as by bicycle, a means of transport for which there will be more than 550 parking spaces.