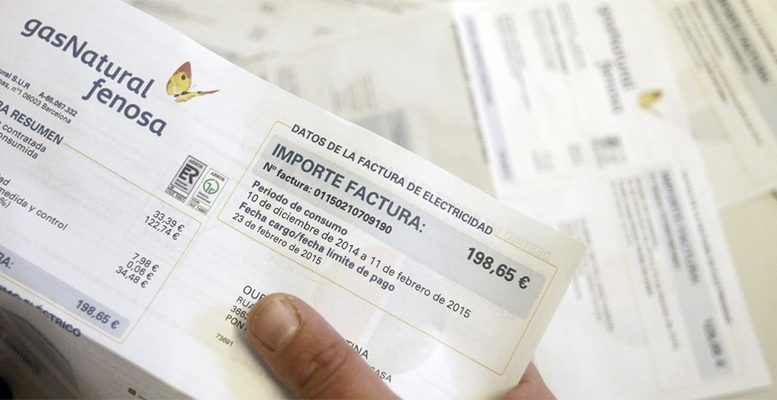 An average user’s electricity bill rose 10.8% in 2017 from a year earlier, according to Facua-Consumidores en Acción (Consumers in Action). Specifically, the bill increased to 75,79 euros per month (indirect taxes included) compared with 68,2 euros in 2016, in other words 7,39 euros more, according to the association’s calculations. In terms of the accumulated figure for the year, the total electricity bill for an average user rose to 907,08 euros, a rise of 88,63 euros on the 818,45 euros paid out in 2016.

Whatsmore, Facua denounces the “brutal” 16% increase in tariffs for energy consumed. It flags that the price of the kilawatt/hour (kWh) went from 13,28 cents in 2016 to 15,41 last year.

In 2017, the month with the most expensive tariffs was January, when the average user had to pay a bill of 87,81 euros. This was followed by the month of December, when the bill was 80,65 euros (with the tariffs applied until the 29th).

The lowest bills were in the months of March and April, where the average was 70,96 euros and 70,98 euros respectively. In 2016, the highest bill per average use was 80,23 euros in December, compared with 60,03 euros in April, the cheapest month.

The other key consumers’ organisation, the OCU, has asked to appear in the investigations opened up by the Comisión Nacional de los Mercados y la Competencia (CNMC) into Endesa and Gas Natural. These are due the illegal alteration in wholesale electricity prices, which reached 90 euros/MWh and fuelled a sharp rise in the price of electricity for users during December 2016 and January 2017.

OCU already asked for this investigation to be opened up in January, assuming that the rise in prices in the wholesale market could not be explained by the normal functioning of the market. Only artificial alterations to market conditions could justify this strong rise in prices, which is precisely what the CNMC is highlighting in its investigations.

By appearing itself, OCU also wants to ensure “sanctions” are imposed as an “example” on those companies responsable. In this way, they will pay not just for the gains illegally made, but also for the real damage caused to the millions of users of the electricity supply.