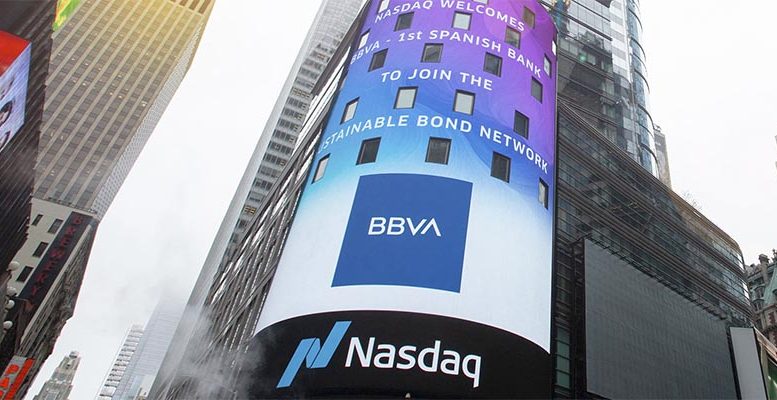 BBVA has joined the (Nasdaq Sustainable Bond Network (NSBN). It is the only Spanish bank on the platform, which consists of the various sustainable debt issuers in the world and is a clear reference point for socially responsible investors. The giant screens on the Nasdaq tower in New York City’s Times Square displayed BBVA’s logo to welcome the bank to this market.

BBVA published the framework for the issuing of bonds linked to the Sustainable Development Goals (SDGs) in April 2018. Since then, the bank has been very active and innovative in its issuances, with over €4 billion sold to fixed income investors. In fact, it is the most active bank in Spain, according to market information company Dealogic. In 2018, BBVA placed the largest green bond issue to date by a eurozone bank. In 2020, BBVA became the first private financial institution in Europe to issue a COVID-19 social bond in the amount of €1 billion, and in July this year, it became the first bank in the world to place a green contingent convertible (CoCo) bond.

Furthermore, BBVA has led 30 issues of green, social and sustainable bonds from clients in the Americas (U.S. and Mexico) and in Europe (Spain, U.K., France, Germany and Portugal) for a total of €19.2 billion from January 1st through October 30, 2020. Three agreements stand out: The bank’s participation in Daimler and Volkswagen’s inaugural green bonds, the electric company EdP’s green bond in the dollar market, and the French telecommunications company Orange’s inaugural sustainable bond.

In the financial sector, BBVA has also played a relevant role as the structuring bank in Bankinter’s sustainable bond framework, and its subsequent inaugural issuing. In addition, BBVA Mexico was the bookrunner for the first gender social bond issued by the Fondo Especial para Financiamientos Agropecuarios (Special Fund for Agricultural Financing).

BBVA has made sustainability one of its strategic priorities. Between 2018 and June 2020, the bank has secured €40 billion in sustainable finance. This represents 40 percent of the €100 billion announced in its Pledge 2025.

The sustainable bond market has grown exponentially in recent years, going from an annual issuing volume of €147 billion in 2018 to nearly €300.5 billion at the end of October 2020, according to data by BBVA Research. This year will be a record-breaking year largely due to the rise of social bond issuances, which have been placed since March to finance initiatives that help with the economic recovery and the fight against COVID-19.