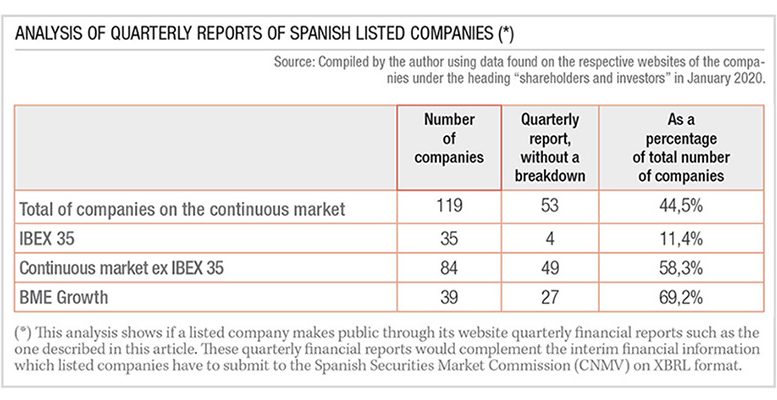 Francisco Blanco Bermúdez* | The transposition into Spanish law of EU Directive 2017/828, dealing with the encouragement of long-term shareholder engagement in listed companies, and some other related proposals will imply some changes to Spanish legislation. For example, the striking proposal that will mean that listed companies will be free to publish or not publish financial information on quarterly results. Specifically, that corresponding to the first and third quarter of each financial year, as annual and half-yearly information will continue to be compulsory.

Although, a priori, this freedom may appear to be a positive change, on the contrary, it may mean less information transparency in markets, which in my opinion is unnecessary.

Without going into the reasons given by the regulators for this change, I think it is worth examining the context. It is paradoxical that the very directive that has given rise to this change is called the Transparency Directive, when the possible consequence of this modification might be that analysts and investors will overnight find themselves with lack of relevant information on how listed companies are being managed for up to six months.

In 2016, BlackRock Chairman Larry Fink, in his annual letter to the CEOs of the main North American and European companies, expressed his concern precisely over the short-term strategies used by some companies to maximise their share prices. In that letter, he even added: “We also believe that companies have an obligation to be open and transparent about their growth plans so that shareholders can evaluate them and companies’ progress in executing on those plans… Today’s culture of quarterly earnings hysteria is totally contrary to the long-term approach we need.”

Can it be inferred from this letter from the world’s leading institutional investor that his advice is that quarterly earnings reporting should stop? Not at all; and I believe the debate shouldn’t revolve around how often earnings reports should be published but around whether or not it is advisable to give markets information on short- term objectives . It is reasonable to think that it is precisely the practice of some listed companies of giving information on their short-term objectives what fuels speculation among investors, and what puts issuing companies under a lot of pressure to meet expectations or even beat them, which, in turn, can lead to serious management mistakes at the expense of long-term growth.

But in order to obtain the long-term involvement of shareholders it is necessary, among other things, to make it easier for them to understand and monitor the activity and business model of companies. That can be achieved through a good equity story and quality quarterly reporting that should track a company’s progress against its well- charted long-term strategy.
On this point, it is worth recalling that in January 2012 the Spanish Securities Market Commission (CNMV) published some very good guidelines on the content of quarterly financial reports to help listed companies comply with article 120 of  the Consolidated Text of the Securities Market; first and third quarter reports will soon stop being compulsory.

However, so much has changed since then, both in markets and in what information investors need, that in my view these recommendations don’t go far enough any longer. Capital management and indebtedness are areas of management which are being closely monitored by investors, as is information of a non-financial nature, such as a company’s business lines, perhaps geographical markets, and ESG performance. If, in addition, we are talking about companies which are in a deep process of transformation or growth, the absence of information for a long period of time can represent a missed opportunity to attract capital or a generator of volatility, and therefore an increase in financing costs.

If we analyse the information provided by Spanish listed companies with respect to what can be considered a standard quarterly report, that is, a report that includes complete financial statements including cash flow statement, a clear description of how the company is being managed so that figures can be easier to understand, the publication of non-financial information such as business lines and geographical markets if applicable, and ESG performance, we can conclude that there is ample room for improvement in quarterly reporting, as the table below shows.

Therefore, giving up quarterly reporting would be at the expense of transparency and the information available to investors, which would have inevitable consequences on the valuation of listed companies. It would be desirable that what happened in the the British stock market – where this modification, approved in 2014, has hardly had any impact as barely 10% of companies stopped publishing quarterly information – happened here as well. It would also be good that companies which nowadays comply with the minimum legal requirements would take this opportunity to broaden the scope of the information they provide in their reports.
The crux of the matter is to make it easier for investors to understand business plans and performance expectations. Warren Buffet has often said that accounting is the beginning of financial analysis, not the end, to which I would add that, in any case, it is a good starting point.