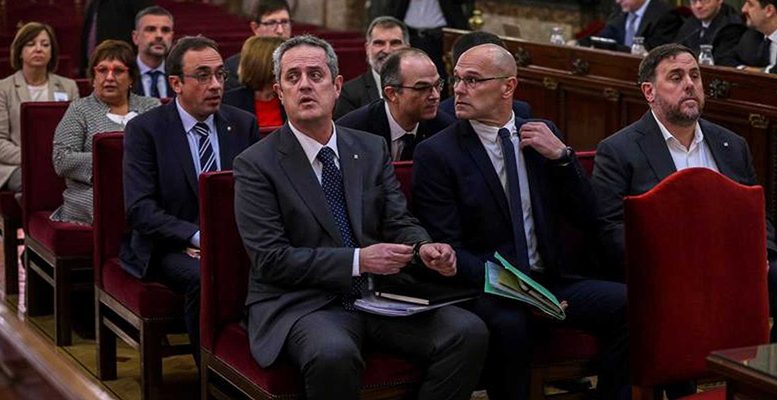 Fernando G. Urbaneja | Throughout the trial of “separatism”, in concrete of the seditious activities carried out by the accused, the separatist strategy of discrediting Spanish democracy and its institutions (a form of the black legend) systematically using international fora and media, has, once again, remained clear.

At two minutes past seven on Wednesday evening, Judge Marchena, who presides over the tribunal judging the Catalan separatist leaders, concluded the oral hearing with the words: “ready for judgement … empty the court”. The twelve accused had had throughout the day their last opportunity to present their arguments in favour of their innocence. None of them recognised their guilt, or even disobedience to the Constitutional Court, something which their lawyers had done the day before. All the accused repeated their separatist convictions and their commitment, more or less intense, to insist on their objective of creating a Catalan Republic, outside the legal system in force. So no regrets at their challenge to the Constitution, although one of them argued that it should not have gone so far, that the political work of negotiation had failed.

The judgement of “separatism”, in concrete the seditious acts carried out by the accused during the last quarter of 2017 which culminated in a short lived unilateral declaration of independence and the subsequent consequences: the flight of the president of the Catalan Government, the application of Article 155 of the Constitution with the suspension of the government and the calling of elections, and prosecutors bringing cases against dozens of separatist leaders, admitted by various courts: the Supreme Court, the National Court, the Catalan High Court and lower level courts.

Of all the trials, the most important has than been before the Supreme Court, whose oral hearing has been held through this year: 52 sessions over four months. Seven magistrates of the Supreme Court have listened to the arguments of the defendants, defence lawyers, prosecutors and other accusers who have presented documentary evidence, questioned 5oo witnesses and argued in favour or against those accused of rebellion, sedition, misuse of funds and disobedience.

The trial has evolved with broad public diffusion (live on television), with generosity in the use of time and word by all involved and with guarantees of process applied by the President of the Tribunal with firmness and, sometimes, liberality. The Court has gone to extremes to avoid the slightest suggestion of partiality in limiting the rights of the accused. The arguments of the accused have wandered far from the legal, with fundamentally political and emotional claims, without the slightest withdrawal of their demands.

The Court must now elaborate its sentence (Judge Marchena who presided the oral hearing is tasked with the first draft) which faces a double challenge: reasoned judicial arguments and the ability to avoid a political slant which subordinates the judgement to political convenience or political party influence, to which the accused and their lawyers have alluded in recent sessions. The judges are seeking to avoid the temptation of “appeasement” which some demand and complicity with those who argue that a tough sentence would complicate an exit from the crisis by aggravating the demands of the separatists, stimulated by the “victimism” which characterises them.

Throughout the trial the separatist strategy of discrediting Spanish democracy and its institutions (a version of the black legend), making systematic use of international fora and media, has once again remained clear.